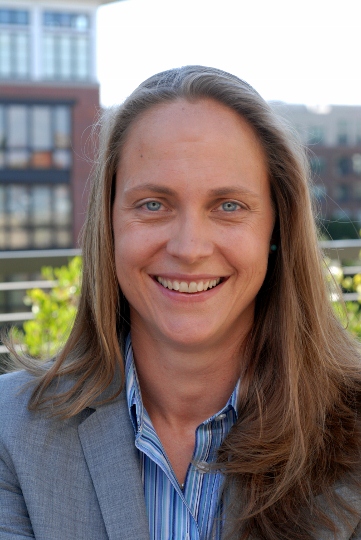 It was started in 1991 by environmentalist Spencer Beebe, of Conservation International. One of the (many) things I love about them is that they are so committed to the ecology of the Pacific Northwest, but at the same time, so open to ideas coming from anywhere, that they even brought in Jane Jacobs—the noted NYC neighborhood activist and critic of “urban renewal” programs—to be on their board.

My favorite story is that after one of her first meetings, she said, "Your ideas about the environment are so great, let’s make them work in cities!" And that’s how Ecotrust started expanding into urban centers.

Now, they're headquartered in this beautifully restored warehouse in the middle of Portland that’s become my favorite place to go in the country. (I’m convinced that Portland is the future, by the way—but more on that later.) In the meantime, go visit their building. It’s amazing.

Sara Horowitz: I’ve always admired what Ecotrust is doing to help transform the model for economic prosperity. It finally seems like existing institutions are starting to rethink their role. It’s like everybody is realizing that the guideposts are all changing, and we have to be thinking in new ways.

Now, anybody can have that great idea that changes things for the better, and that’s a bit of a new phenomenon. It used to be that people would just resign and say, "What can one person do?”

SH: It's funny you should say this, because freelancers have a very do-it-yourself quality, because they are not covered by any government protections. They don't get unemployment insurance, they're not covered by anti-discrimination laws--so they have to create everything for themselves, which makes them unbelievably creative and nimble. That’s probably why Freelancers Union has been able to work so much with our members on co-designing things.

I wonder if, in some ways, the field of social enterprise is maturing? In the ’90s, you needed individuals to step up and be social entrepreneurs, because there were no institutions. Now, we’re in the first generation of institutions, and we’re all trying to figure out the best way to build them.

AS: I think that’s right, and it coincidentally comes back to Jane Jacobs. It used to be about everyone trying to become a social entrepreneur in their own right. Now, it’s about figuring out how to form higher-order organisms, if you will – new institutions that arise out of combination and differentiation. That was her point: Economies are natural, and the sooner we understand them as ecological systems, the quicker we can get back into a semblance of balance with nature.

There's this really interesting need for crafts and trades, and it’s coming out of the growth in different models for agriculture and food production. I'm fascinated by this: If you were Cesar Chavez today, what does the farm workers movement look like? I’m talking about all the people who are engaged in food production and processing but aren’t doing it in the dominant commodity system—they're doing it in a more artisanal way. How do these people organize around things like health insurance?

AS: Exactly. I wonder what traditions will get hybridized. In a different food system, if you're a new farmer, you're not going to want to buy all that equipment. It makes sense to own these things cooperatively.

I was talking to a farmer in the Willamette Valley who builds his own machines. That's a really interesting transferable skill, and if there’s enough demand, maybe he’ll end up organizing an apprenticeship program. It's fascinating to think about what new institutions will emerge.

SH: This is so interesting right now, because while the government is still in the middle of debates over sequestration, it really feels like instead of waiting or being dependent on what's happening in DC, we're just moving on and doing it ourselves.

AS: We see it with our forest fund. All of a sudden, we're employing loggers again year-round. These are not your traditional loggers cutting down trees on some ridiculous harvest schedule. They’re going in there with much more of a crafts approach of selective forestry. I’m talking about using draft horses and highly specialized mechanical equipment designed to minimize the environmental impact.

All that stuff the TV show Portlandia makes fun of—well, that's us.

SH: It makes me think about all the possible connections between the environment and the new workforce.

AS: I think about that connection a lot. We’re changing the systems that provide all the things that we need to live well -- food, energy, water, shelter, finance, health, education. So, what does it mean then, to be “making a good living” in the places that you live?

It’s time to imagine what the jobs look like that make for a resilient economy. We actually commissioned an artist to paint that picture for us—and I imagine the rainwater collection specialists and triple bottom line accountants as future members of the Freelancers Union.