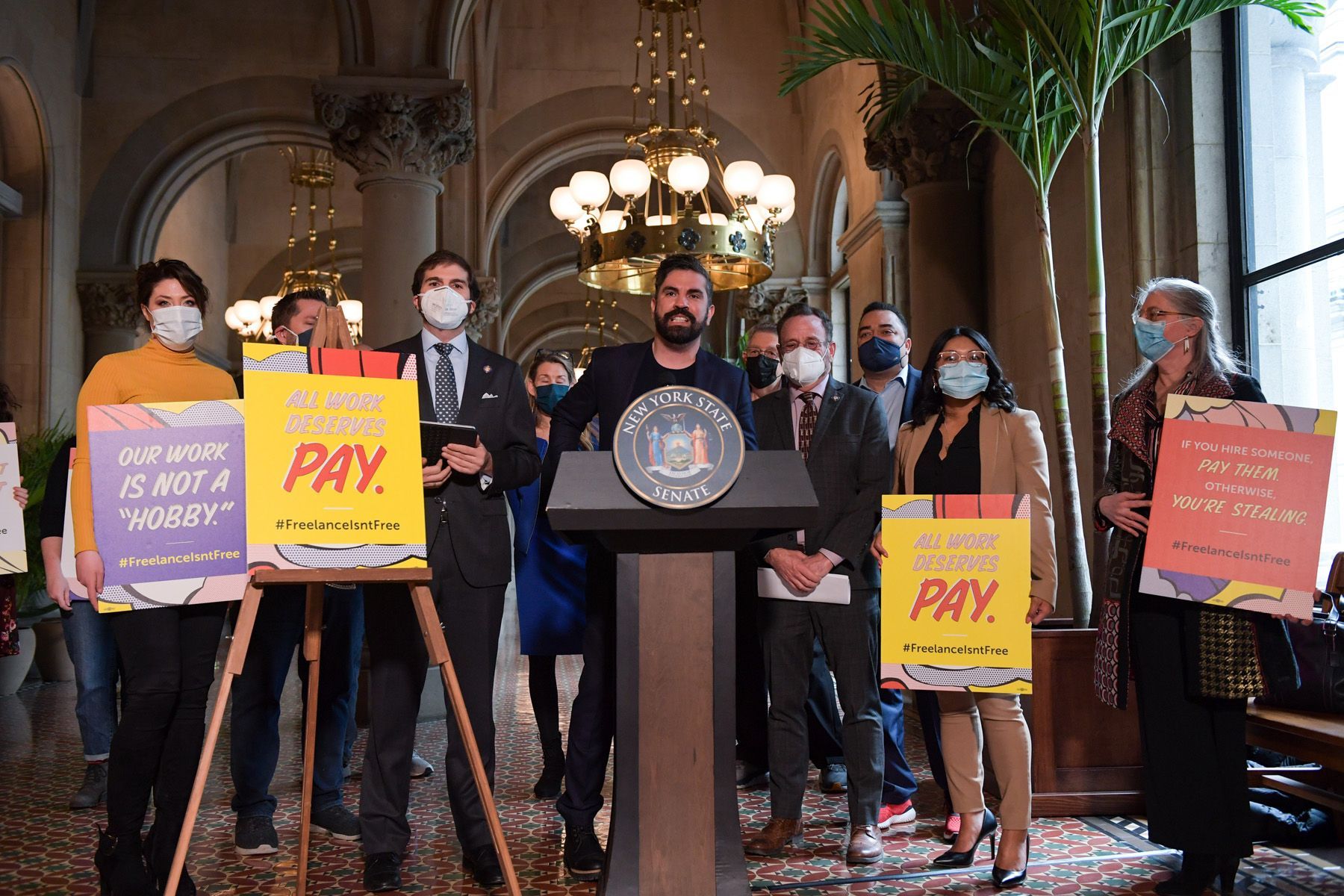 At Freelancers Union, one of our top priorities has been to advocate for the proliferation of the Freelance Isn’t Free Act across the country. Last week, we joined our freelance and labor partners across New York State in Albany to announce the introduction of a statewide Freelance isn’t Free Act, Bill S8359, which would expand non-payment protections for freelancers across the state of New York. We are proud and excited to bring a version of New York City’s landmark law to the rest of New York.

This is the first step toward securing legal rights and protections for freelancers in all of New York State.

In a study led by our organization, 71% of freelancers have reported having to deal with client non-payment. With the statewide Freelance Isn’t Free Law, independent workers across New York will have the rights to a written contract, timely and full payment, and protection from retaliation. The law would empower a city or state agency to enforce it, and has real consequences for violations of these rights, including statutory damages, double damages, injunctive relief, and attorneys’ fees and costs.

Not paying a freelancer is wage theft, plain and simple.

Unscrupulous clients get away with it because they know that freelancers work alone, without the legal rights afforded to employees.From Buffalo, to Rochester, the Hudson Valley to Long Island, freelancers would be able to file a complaint with the Department of Labor to collect payment thanks to the legislation sponsored by Assembly member Harry B Bronson and Senator Andrew Gounardes. Passing this law will be a major victory for the hundreds of thousands of freelancers who are the backbone of the state’s economy. But In order for the bill to become law, it has to pass through the labor committee of both the State Assembly and the State Senate, voted by both bodies and lastly signed by the governor.

Right now, the most important tool we have is your voice.

Legislators need to hear the true stories directly from freelancers who have suffered because of nonpayment to fully understand the scope of the issue. It’s time to speak up! Find your assemblymember here, your state senator here, and click here for a sample script (for both writing and by phone) to tell your representatives.

If you are interested in working with us directly to make this law a reality, either by providing a testimonial or helping to organize your freelance peers, please reach out directly to advocacy@freelancersunion.org.

If you’d like to submit a written comment or send an email to your councilmember, you can use the below script as a model. New Yorkers are also invited to share stories of how Freelance Isn’t Free has helped them. Press coverage for the legislation can be found below: