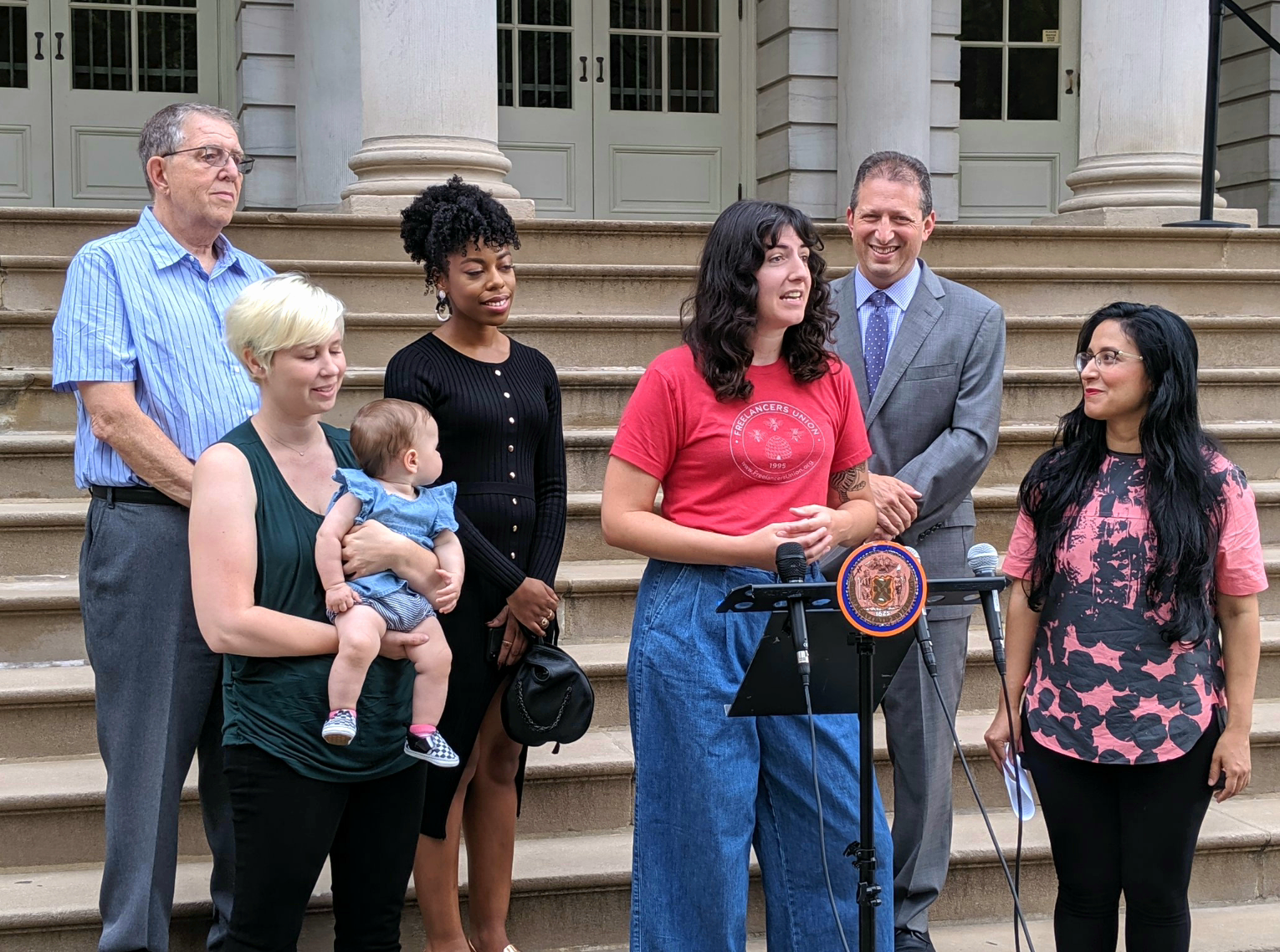 As of 90 days from its signing, freelancers who experience discrimination will be able to file a complaint with the New York City Commission on Human Rights. And to make sure that NYC freelancers understand their full rights, Freelancers Union will be working on campaigns, trainings, and resources. Please look out for updates.

This is huge news for for NYC’s 1.3 million independent workers, who may face harassment and discrimination in the workplace with fewer protections or paths for recourse than traditional employees.

The simple truth is that too many people must go to work feeling unsafe. Freelancers can be particularly vulnerable, as they rarely have a supervisor or HR department where they can safely report violations, coworkers they can confide in, or an adequate safety net that would allow them to pursue action against clients who threaten to retaliate.

Independent workers face these issues alone, and for many, bringing attention to acts of harassment or discrimination means losing a client. Not surprisingly, Freelancers Union’s research shows that 75% of incidents go unreported.

What does Int. 136 mean for freelancers?

All freelancers will now be covered under the law, which means that it is illegal to discriminate against freelancers on the basis of:

What is the history of the bill?

Council Member Brad Lander and Freelancers Union have championed the bill since 2015, when it was introduced alongside the Freelance Isn’t Free act. Since then, a number of advocates have expressed support for stronger protections for freelancers — including many Freelancers Union members who testified in support, and gave voice to the urgency of better protections against sexual harassment and discrimination. Here’s what they have to say:

"I am grateful to Councilmember Brad Lander and NYC leadership for passing this much needed bill that protects and empowers freelancers like myself to report and challenge the harassment and discrimination often found in oppressive workplace cultures." - Carolina Salas Saunders, freelance marketer

"I now know I’ll be able to bring all my talents, experience, and ambition to the workplace without the fear of being taken advantage of. I'm so proud of NYC for passing this bill and protecting the rights of freelancers across all industries."  - Erin Bagwell, freelance filmmaker

"In our struggles for increased safety and greater quality of life, we have all finally achieved the goal of making NYC a sanctuary for freelancers against crimes of harassment and discrimination. This will be the framework and cornerstone for freedom of mind, work, and perhaps the achievement of even higher merit.  We also hope that our victory will be an example to the rest of the world of greater justice." - Nina Irizarry, freelance creative

“NYC already established that freelancers should be valued with the Freelance Isn’t Free Act. So now, I’m proud NYC is staying ahead of the curve by recognizing that the future of work is changing – and that those changes mean freelancers should also be protected! Extending these protections to freelancers gives me hope for the future!” - Angela Ivana, freelance beauty professional