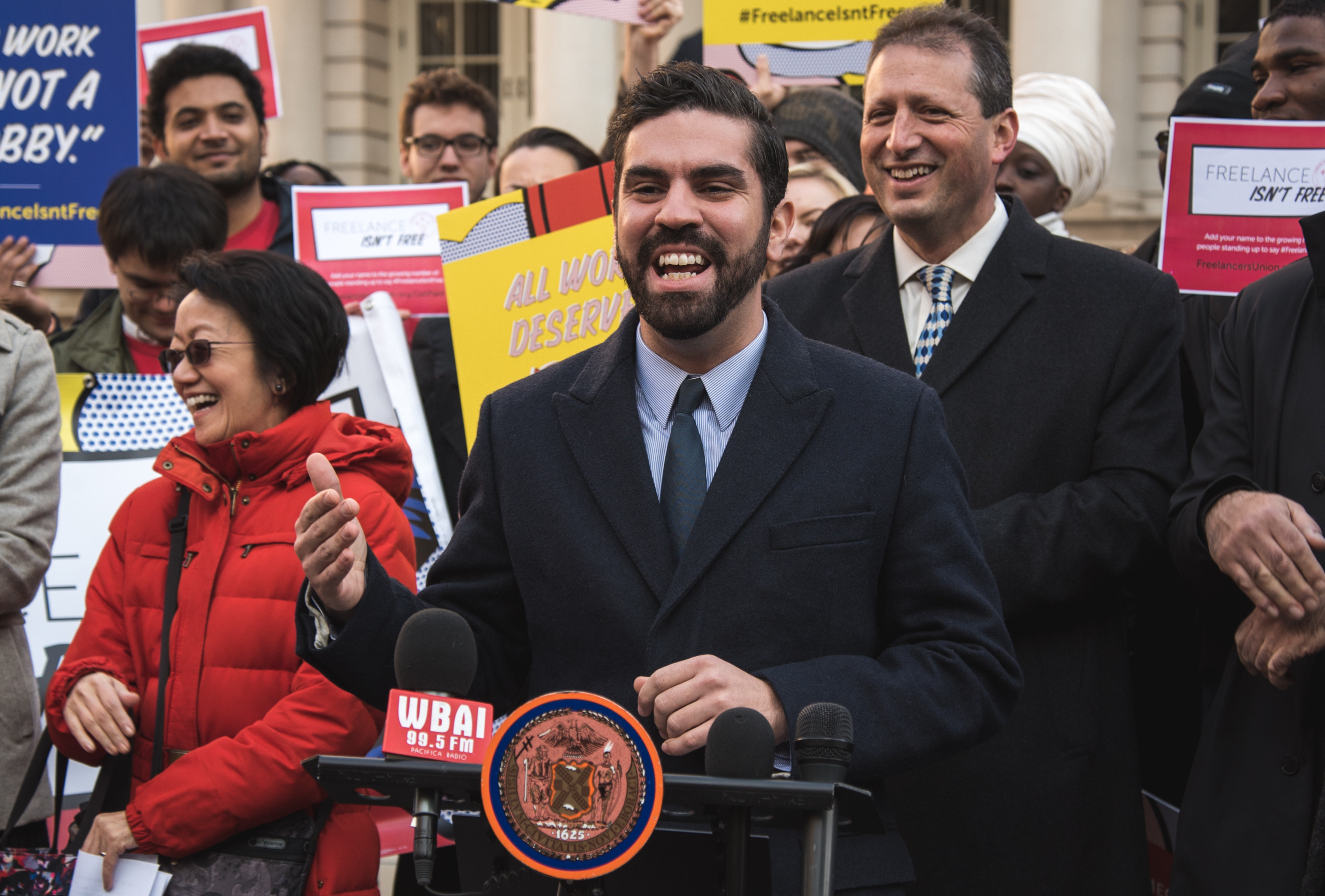 I’m thrilled to announce that Freelancers Union is endorsing Rafael Espinal, City Council Member for the 37th District, for Public Advocate. I hope our New York City members will join me in voting for him in the special election on Tuesday, February 26, and at our Text Banking Party to support him.

In a race with a number of good candidates, Rafael Espinal has demonstrated an unwavering commitment to improving the lives of independent workers. He has been dedicated to engaging with freelancers on the issues that matter most, and an ally of Freelancers Union as we raise our political voice.

As Chair of the NYC Council’s Committee on Consumer Affairs in 2016, Rafael Espinal was instrumental in helping New York City pass the landmark Freelance Isn’t Free law protecting freelancers from nonpayment. “I was a co prime sponsor and cleared my committee’s schedule to pass the bill as soon as possible,” he says. “Freelance workers are an integral part of New York’s economy and they deserve fair working conditions like everyone else.”

Council Member Espinal also favors a number of other reforms to ensure that freelancers have the protections and support that they need to thrive. He has voiced strong support for universal healthcare, and is a sponsor of NYC bill Int.136-2018, which would extend protections from harassment and discrimination to independent workers under the City’s Human Rights Law.

What is a Public Advocate anyway?

The Public Advocate is a citywide elected position in New York City, which acts as an ombudsperson for all New Yorkers – a government official who champions the public and ensures government is responsive to their needs. Created in 1993, the office has historically served as vehicle for championing worker and consumer protections by drawing attention to citywide issues. Public Advocates can also introduce and sponsor legislation.

If elected to office, Rafael Espinal plans to uplift the freelance community. “I would want to establish regular meetings with freelancers and their representatives to ensure that I’m always up to date with issues and ready to take opportunities — whether that’s new legislation, advocacy work, or some other way to support.” He also cites expansion of the Fair Fares Metrocard program to cover freelancers as a priority. “We need programs like this to recognize that some people’s income is very different month to month,” he says. “I’ll push for access to Fair Fares in times when freelancers are between jobs.”

Freelancers are a growing political constituency. By supporting candidates who drive meaningful changes, together we have a chance to build our political power. Learn more about our endorsements process here.

Here’s how you can help:

Join me and fellow Freelancers Union members for a Text Banking Party on February 20 to support Rafael Espinal, and vote for him on Tuesday, February 26. Find your polling station here, polls will be open from 6am to 9pm.

Please share with your fellow freelancers and encourage them to vote too.