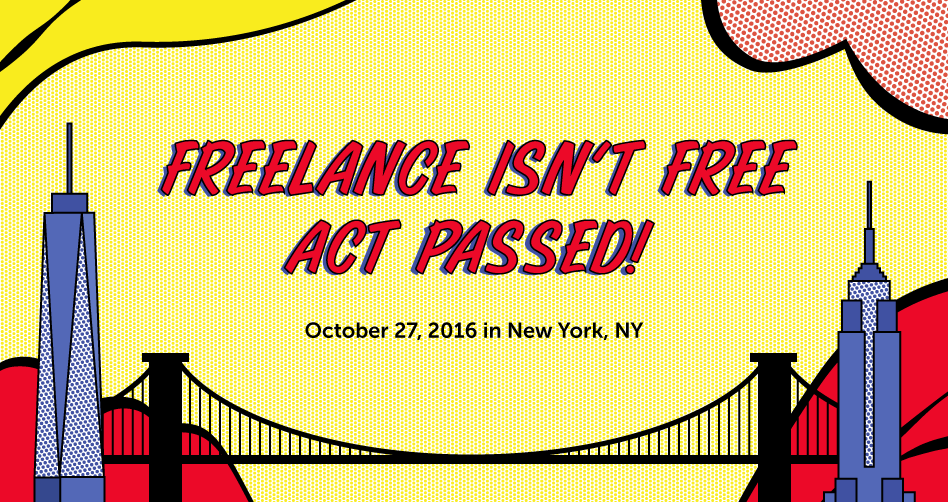 In a truly historic moment, New York City became the first city in the nation to protect freelance workers against client nonpayment today on October 27, 2016. This landmark victory is a testament to what can be accomplished when we stand together for the rights of the new workforce.

Today, 38% of workers in NYC freelance and it’s about time our labor laws were updated to protect freelancers. With 55 million Americans freelancing across the country, we hope to replicate this legislation in other freelance friendly cities across the nation.

Passing with 51 votes, the Freelance Isn’t Free Act requires written contracts for freelance gigs, allows freelancers to file complaints against non and late-paying clients with the Department of Labor Standards, and institutes penalties against clients found guilty of nonpayment in small claims court.

You can view the legislation here.

This victory comes after over a year of collective campaigning - together, we mobilized freelancers across New York City, our allies in labor and business, and our supporters at City Hall. The Freelance Isn’t Free Campaign launched in September of 2015 at Brooklyn Borough Hall, with over 100 freelancers in attendance as well as city leaders like bill sponsor Council Member Brad Lander, Council Member Stephen Levin, and Council Member Laurie Cumbo.

Over the course of the year, freelancers across the city shared nonpayment stories, met with Council Members, and stood together at City Hall to spread awareness about client nonpayment – which affects 7 out of 10 independent workers. Together, we rallied for a city-wide Day of Action, brought gig economy issues to the fore at Civic Hall, showed up on the steps of City Hall to usher the bill into consideration, and testified before City Council about why we need better protections for freelances. Finally, over 8,000 freelancers signed the Freelance Isn’t Free petition to push the bill to the vote.

Today, we’d like to wholeheartedly thank the freelancers of New York City, bill sponsor Council Member Brad Lander and our supporters at City Council, as well as our allies in labor and business – all of whom have been instrumental in making this moment of history happen. New York has shown its at the forefront of the gig economy and this legislation will serve as a national model for protecting freelance workers everywhere.