How one freelancer's invoice snowballed into an $80,000 unpaid bill 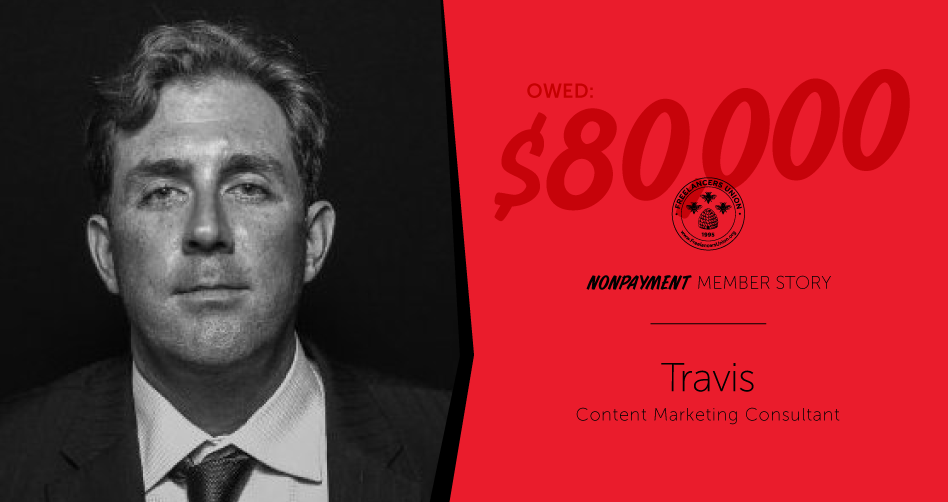 In 2011, I started doing video projects for a company called Sierra Circuits, they make prototype circuit boards for electronics hardware makers. This is a relatively successful small business, they were doing revenues around 40M when I last heard a report from their marketing director.

Here's some of the work we did for them.

As time moved on, they recognized that I understood how to use content for marketing and engaged me on retainer to develop a comprehensive content marketing strategy. We on-boarded to Marketo and began developing a content pipeline for all their channels. Things seemed to be going well, but I started to see the writing on the wall as they began hiring junior marketing people and asking me to train them.

END NONPAYMENT IN THE CITY OF NEW YORK: SIGN THE PETITION

In summer of 2014, I pitched a new product to them that was positioned as a branded content play. They signed up for a 6 part web series about hardware startups. Because I had been working with them for a few years, I gave them latitude on payment schedule, but I was eventually only paid 50% of what was owed on these two shows. Despite the fact that I had engaged a production crew for 6 shows and promised additional work, Sierra never made additional payments and production was terminated. Here's the final product.

This video series was pitched in addition and separate from my regular work with them as a content strategist. While this show was in production in late 2014 and early 2015, I was also handling their "regular" content marketing on the assumption that they would be maintaining their retainer through 2015. We were in the middle of a negotiation in the first couple months of 2015, but I continued work under verbal agreement that they would backpay for work completed when we eventually reached terms.

Unfortunately, in April 2015, after 4 months of work under that assumption, I had my last contact with the company. They stopped returning calls, emails and text messages. Their outstanding bill for completed work for 2015 was over $30k, plus another $50k owed per terms of our contract for the remaining 4 episodes of the web series.

I had incurred about $30k debt paying my crew and talent for the work performed and was left to eat that cost. Additionally, I suffered a difficult loss of face with crew who relied on my promise for additional work. That actually may have been the hardest pill to swallow in all of this, not coming through with my end of a promise on work to other freelancers who work project to project.

After a few angry months of consternation and stress, at the end of last year I was referred to Scott Comerford, an attorney with expertise in breach of contract law. We filed a complaint and are now in the early stages of motion filings and case management conferences.

I learned a lot from this – primarily not to trust clients, even long term clients, to pay their bills. While trust is a necessary part of a good relationship, I realize now that business is business and must be handled much differently than a personal relationship because there are hard consequences beyond the loss of a relationship when you "break up" with a client.

I think taking this perspective is especially difficult for creative people. We go freelance because the rigidity of the business world isn't for us – it's not where creativity lives. But the difference between a successful creative and a starving one is knowing how to implement boundaries and standards for operating a one-person-show. We have a right to demand payment for work at a rate reflective of our talent – and getting paid upfront, before product delivery and on-time is normal.

Also, I learned an important lesson about contracts. Just having a client's signature on a contract does not mean much if you can't enforce it. Enforcing a contract is expensive; corporate clients know this and take advantage of it. There are ways to make contracts more enforceable and desirable for attorneys to take on. Specifically, as I learned in my case, having an "attorney's fees" clause could have added more leverage in our negotiation before trial.

END NONPAYMENT IN THE CITY OF NEW YORK: SIGN THE PETITION