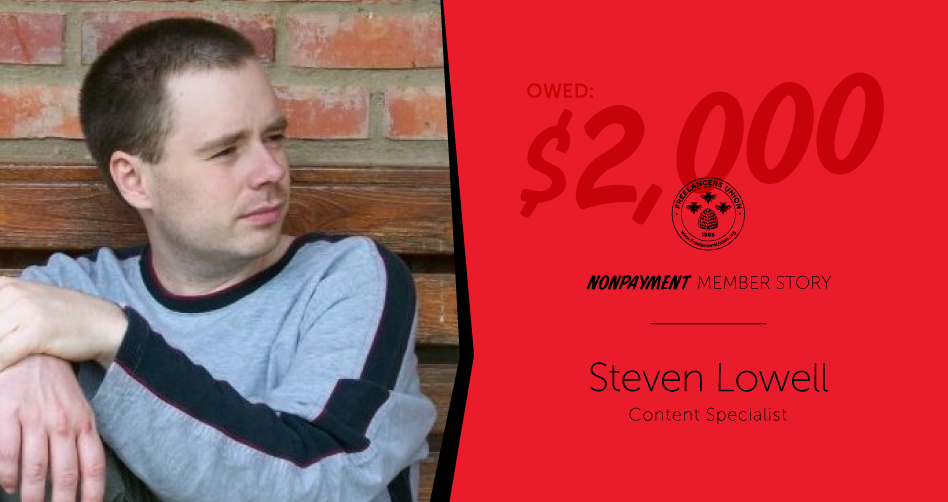 This post is part of a series of freelancer stories about waiting to get paid -- or never getting paid at all. 71% of freelancers get stiffed by deadbeat clients and the average unpaid freelancer is owed about $6,000 in income. Have you been stiffed? Shine a light on this issue by adding the amount to the World's Longest Invoice.

Since 2004, I have been both freelancing as a voice actor while also working behind the scenes for voice actor websites offering freelance work. There are approximately 250,000 voice actors in the United States alone with the most abundant workforce comprised of working mothers from home.

I grew up in Staten Island, NY and for the last 20 years have been a resident of St. George.

I have dealt with more than 300 nonpayment issues, but the worst was in October 2009, when an agency that finds work for voice over actors sought my services as a Community, Quality, and Customer Manager. One of their clients was using their services to find people to read newspapers for the blind at a nonprofit organization.

In my position as a Community, Quality, and Customer Manager, I helped voice actors get paid when clients tried to stiff them. One freelancer came to me after 30 days of completing a project for this non-profit and not receiving payment. As I tried to help him, I discovered that there were at least 30 cases of this organization stiffing its freelancers.

At this point, I decided to go undercover and got hired by the client myself. I did some work for them, for which I was owed $2,000. Payment never came.

In February, 2010, it was learned the client started looking around for new voice actors on websites, and using the recordings in ways not originally agreed upon including using work for public radio broadcasts, which, by industry standards, would mean an increase in pay. Around the time everyone began to really get pushy about getting paid in accordance with how the client used the work, the client stated he would no longer need their services and tried to hire new voices.

In the end, more than 30 voice actors lost more than between $500-$2000 each. Even worse, the client began to threaten legal action. This client, who did not pay 30 voice actors, turned around and threatened to blacklist them within the industry!

Not only did this affect the income of more than two dozen voice actors, but also caused them future industry problems for seeking recourse against a client who sought services as part of a non-profit. As of right now, less than 5% of voice actors are able to work full-time and finding work is extremely difficult.

Recently, I testified at the Freelance Isn’t Free hearing. I decided to testify because I have always been troubled by watching people not pursue lost wages for fear of retaliation and blacklisting. I believed our society had moved past such business practices, and it saddened me to see it had not. I wanted to do something about it!

At the hearing, I was amazed to learn just how many industries were dealing with this matter, and how many people were affected. Working independently leaves a person feeling like an island. I just had no idea this issue was an epidemic.

My message to other freelancers is this: Stay strong and true to your beliefs in what you know is right. Freelancers are the workforce of the future. Don't be drowned out by the noise of businesses who make you feel uncomfortable because you want a fair and dependable work environment in the future.

The only way to solve the nonpayment problem is to fight for new solutions. Are you owed money from a deadbeat client? Add the amount on the World's Longest Invoice to raise awareness about client nonpayment in the freelance workforce.