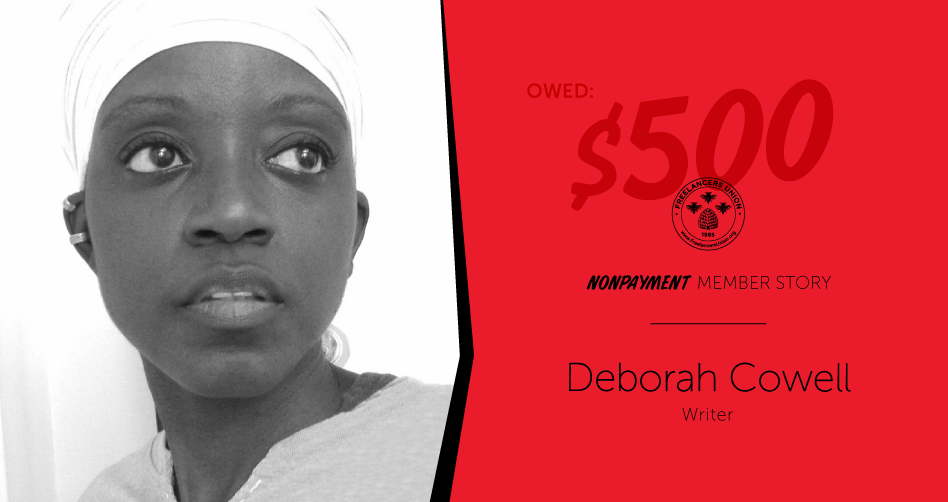 This post is part of a series of freelancer stories about waiting to get paid -- or never getting paid at all.
Presently 71% of freelancers get stiffed by deadbeat clients and the average unpaid freelancer is owed about $6,000 in income.
Read on for first-person accounts from Freelancer Union members facing this issue -- and their thoughts on how to solve it.

I grew up in the Fort Greene section of Brooklyn and currently live in Bensonhurst. I was born and raised in New York City. My background is in publishing as a formally trained book editor and, as a freelancer, I am a writer. I have been freelancing for well over ten years.

On Monday, February 29, I testified about my experience with client nonpayment at City Hall at the Freelance Isn’t Free Hearing. I decided to put my experience on public record because I want to help other freelancers avoid the same situation. For too long, I felt reticent about sharing my story because $500 is a relatively small dollar amount – but my time and my work does matter.

At the hearing, among fifteen other freelancers sharing testimonies, I realized that being a freelancer in New York City does not mean being alone. In fact, it means we are becoming increasingly connected as an important component in the nation’s workforce. City Council is really listening to us, but in order to make change, we have to speak up.

**Join the movement to end nonpayment **

Here is my testimony:

The foundation of my industry is the book contract. Freelancers are involved at every stage of the publishing process. It’s simply the culture of the industry.

In 2015, I agreed to do some editorial work for a client. The agreement was verbal and, because I trusted her to some extent, we did not have a contract. Shortly after I completed the agreed-upon work, she slightly altered the work I produced, claimed everything as her own intellectual property, and failed to pay the $500 she owes me.

Over three months, I tried to collect payment via multiple phone conversations and emails. Eventually, she handed me $60 in cash after an in-person exchange and essentially said, “Take it or leave it.”

Although $500 may not sound like much, I’ve put together many small deals for less than a thousand dollars. If all my clients were to behave this way, my life would be a constant nightmare of living in fear of being shortchanged. Though it may seem disadvantageous to go through the stress of chasing down a couple hundred dollars, that couple hundred dollars could cover my electricity bill, or even groceries for a couple weeks.

Almost all freelancers are familiar with the phrase “feast or famine”. Sadly, too many of us come to know the famine as a result of clients who take unfair advantage. Freelancing is by no stretch of the imagination free. We are who we are because we love the work that we do. But we still have to eat. We still need health insurance. And we are still a part of the workforce.

In mandating contracts, the Freelance Isn’t Free act will protect the many freelancers making a living in the publishing industry – and the 30-day payment terms those contracts must have will have a real, tangible effect on this industry, where 120-day past due payments are par for the course. There are best-selling authors who can tell stories of checks taking months to process!

The wheels of the machine in publishing are enormous We are talking books, magazines, journals, the Internet -- most of it based here in New York. The Freelance Isn’t Free Act will help keep the gears oiled properly.

In my particular case, I am certain that had I had the law on my side at the time, the mere knowledge of that fact would have created a safety net of confidence for me to be able to demand payment.

It is clear to me that we are in the unique and perhaps enviable position yet again of blazing the trail into an amazing future that includes pretty much all industries. To ensure New York City remains a leader in workforce development, protecting our citizens who freelance is the logical next step.

Whether you have $5 in your pocket or $5 million, $500 will never not be a lot of money for work completed. Getting paid for work is a basic right and as freelancers, we have the responsibility to defend that right. Join the #FreelanceIsntFree Campaign today to show your support.