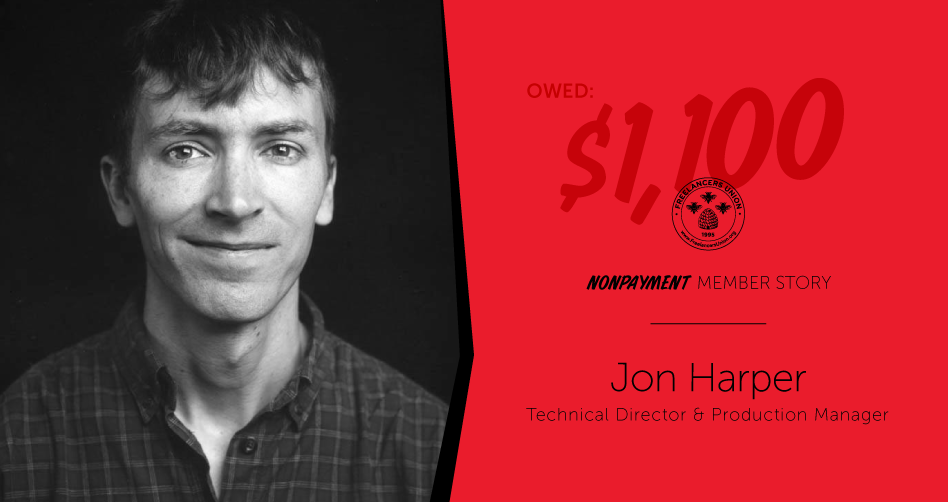 This post is part of a series of freelancer stories about waiting to get paid -- or never getting paid at all.
Presently 71% of freelancers get stiffed by deadbeat clients and the average unpaid freelancer is owed about $6,000 in income.
Read on for first-person accounts from Freelancer Union members facing this issue -- and their thoughts on how to solve it.

I work full-time at a theater as the technical director/production manager. Most of my work is involved with maintaining the space and coordinating with all the performers and companies that come into the space.

**I also freelance **outside of this, wearing many different 'hats' as a lighting designer, technical director, carpenter, master electrician, etc.

A (somewhat famous) puppet company came into our space to produce a show. In the course of doing this, opening night was coming closer and closer, and they realized that the show wasn't going to happen in time. So, they asked me if I would step in as a second technical director and shop builder to push the process forward and get the show done before opening night.

I agreed, **we negotiated an hourly rate (but did not use a contract) **and I spent every bit of free time I had with them until opening night about a week later. ** Right around opening night, I invoiced them for my time. **

“No problem, will get you a check soon.”

The show ran for over a month, and** still no check. ** The show had not sold as well as they were expecting, and I think they were in a financial bind.

At that point, I warned them that the 2% monthly late fee would kick in if they didn't get me a check soon. They replied that they needed another two weeks.

Since I was somewhat aware of their situation, I said that I would waive the fee for now, and expect a check in two weeks. The show closed, and during strike I learned that n**one of the performers had been paid **their second half of their money, and **some of the checks for the first half had bounced. **

They're already getting paid practically a pittance for the amount of time and effort that they put into the show (months of all-day every-day calls), so** not even paying them was just insulting. **

Then, the company also informed the performers that they would also have to be the strike crew, as there was no money to hire a regular strike crew.

That didn't go very well (not surprisingly), so the theater space insisted that the company hire a crew and found some laborers last-minute who were willing to give a good deal. We paid the workers, then invoiced the company. That money has yet to come back as well.

Another month goes by, and at this point **they have stopped responding to emails **about when I might expect payment. A quick survey of a few other folks reveals that they have not been paid yet either.

So here we are, over three months past due, and** I still have not been paid.** They did write to promise that they were finally sending a check, but it's been 10 days, and as we live in the same city,** I doubt that happened. **

Also, to add insult to injury, the leader of the company very publicly came into a large financial windfall a few months ago that would more than cover the costs of paying all of these people. I don't know how long it takes for him to actually see the money, but by now he should have sorted that out and paid his workers and collaborators.

The sad part is that the puppeteers were not surprised in the least that the company wasn't living up to its promises. ** I think they like working with them, but have become accustomed to getting the short end of the stick when it comes to money. ** It's really sad, and disheartening for everyone. It sends a very clear message that the company will use the people for their talent and their labor, but when it comes to doing right by them, they have no interest in following through.

We'll see what happens moving forward. Legal challenges have been thought about, but for now we're still trying to work directly with the company to get them to pay us without having to go through the hassles of the court system.

In the future, I think I’ll demand an up-front payment before I put all my free time into someone else’s project. I believe most of the other unpaid workers had contracts with this company, but, as a pinch-hitter, I skipped this step. Contracts or no – we’re all in the same boat, but I do find that contracts can clear the air around expectations and payment. It’s not a step I’ll skip again.

As the freelance economy evolves, it's likely that more and more full-time workers will begin to supplement their income with freelance gigs. The #FreelanceIsntFree Act will protect anyone who chooses to take on freelance work against nonpayment. Let's make New York City great for freelancers: Email your Council Member and let them know #FreelanceIsntFree.