Special Report: the costs of nonpayment 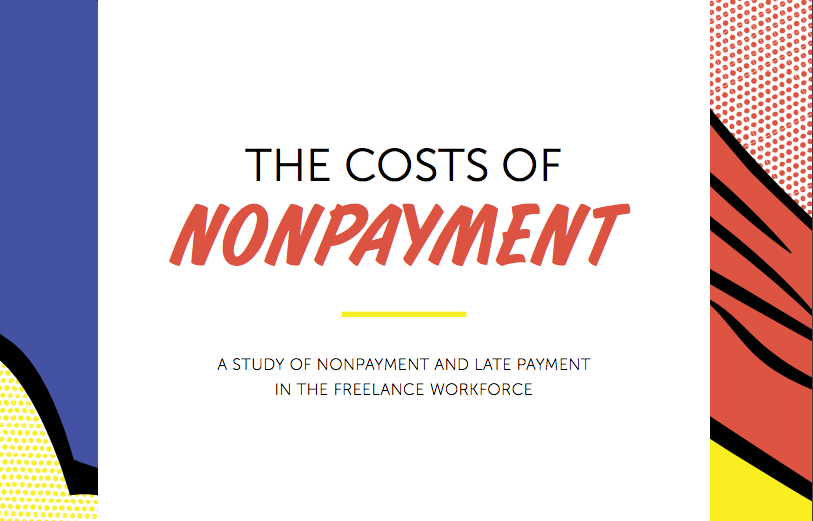 One in every two freelancers had trouble collecting payment in 2014. In a nation of 54 million freelance workers, that’s a lot.

This year, we surveyed over five thousand freelance workers across the United States to learn more about the nonpayment problem and shine a spotlight on the facts.

We found that as companies increasingly rely on freelancers to fill their needs, employment laws have failed to keep pace with the changing workforce. 71% of freelancers struggle to collect payment for work at least once in the course of their career. And, because freelance workers lack the same protections as traditional employees, many have little recourse for collecting on those payments.

That’s why we launched the #FreelanceIsntFree Campaign -- to find legislative remedies that make it easier for freelancers to get paid on time and in full.

Our study, The Costs of Nonpayment, not only sheds light on the nonpayment problem, but also on the impact of nonpayment on the freelance workforce. The average unpaid freelance worker loses almost $6000 annually – which accounts for 13% of their total income.

Such a loss of income has a profound impact on a freelancer’s bottom line – many of those surveyed were forced to borrow money on credit or dip into their savings.

But nonpayment doesn’t affect the independent worker alone, it affects the entire economy. When we disempower one third of the workforce, we cripple innovation, creativity, and business at large.

Don’t delay: Learn the facts. Share your story. Make your voice heard: Let your community know that you support the #FreelanceIsntFree Campaign.