Client can't get his act together? It almost cost this freelancer $7000 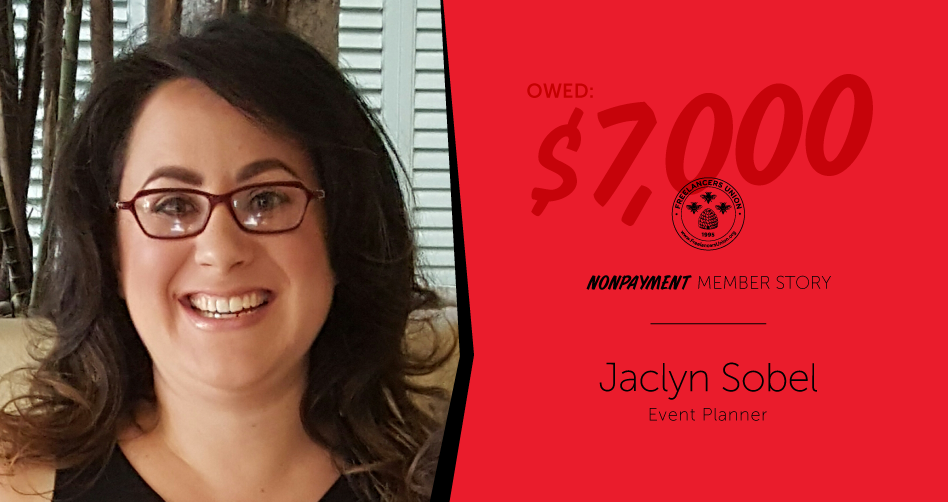 Join the fight against nonpayment #FreelanceIsntFree

My brother’s former boss hired me to help set-up new office space in NYC for a tech start-up primarily based in Europe. It took the company weeks to make the decision to hire me – which I chalked up to international communication issues.

Finally, I was hired for the months of September and October to both set up the office space and plan a soft launch event for their product during Ad Week.

Because I knew and trusted my contact in NYC, I went ahead and started work without a contract, though I did send my salary requirements and scope of work via email for their records.

I was told the contract was in the works.

I proceeded to organize vendors, source supplies, find caterers, etc. There was some drama around whether to have the launch party in the office or at a venue nearby; they changed their minds about 6 or 7 times.

The indecisiveness was alarming, but I rolled with it and did my work.

The entire time, I kept asking for the contract.

Finally, the week of September 21, the majority of the folks from Europe came to town. I had a few meetings and eventually received the contract. The rate was correct, but the terms and conditions were way out of line.

I wasn’t about to agree to a six-month non-compete and 90-day payment terms. It just didn’t make sense for the scope of my work! So, I redlined the contract and sent it back.

They were surprised that I had issues with the T&C, but after about a week I finally got hold of someone saying my changes were approved.

At this point, I was told that I was only hired for the month of September and not October. They hired an office manager and I was to give her a download on everything that I had set up – which I did without complaint.

**I was now a week out of the job and still hadn’t received payment. **When I followed up, I was told there was an issue with my invoice and that the company wanted a work log.

I had never been asked to submit my hourly tasks and my rate was a day rate. Furthermore, I had a clearly stated overtime fee after an 8-hour day. One of my meetings was a dinner and one was over coffee on a Sunday.

They were surprised I charged them for that time.

Then, the people with whom I worked from Europe** claimed that I didn’t work on certain days.** So, I had send over 10 emails as proof that I worked and the work was completed.

At this point, the CEO got involved and told me they wouldn’t pay because he didn’t meet me while he was in NYC for 2 weeks.

Obviously, this wasn’t my fault. No one indicated that I needed to meet with the CEO and, because I was moving their office, I wasn’t working from an office.

Finally, I started copying a lawyer friend on emails. I didn’t need her to do anything, but just letting them know that I had a lawyer in my court made me feel better.

At this point, things started to get ugly, I was compelled to threaten a lawsuit for breach of contract and nonpayment. All of this was very embarrassing for my brother’s former boss – who was satisfied with my work and wanted to hire me for other events.

After over 6 weeks of email exchanges, I received payment confirmation that a check is in the mail.

That is the long, short story of the last 2 months of my life. I’m happy to share it because I hope it helps others. I knew better than to work without a contract, but because I trusted my contact, I let it slide.

When it came to fighting to get paid,** I’m glad I didn’t give up or accept less. **I was ready to take further action if necessary, but I’m glad it didn’t come to that.

I know the work I did was good. I know my invoice was in order. I know the law is on my side.

Trust that you'll be paid for the work you've done shouldn't be unfounded.
How far are you willing to let it go? Show your support by joining the #FreelanceIsntFree campaign.