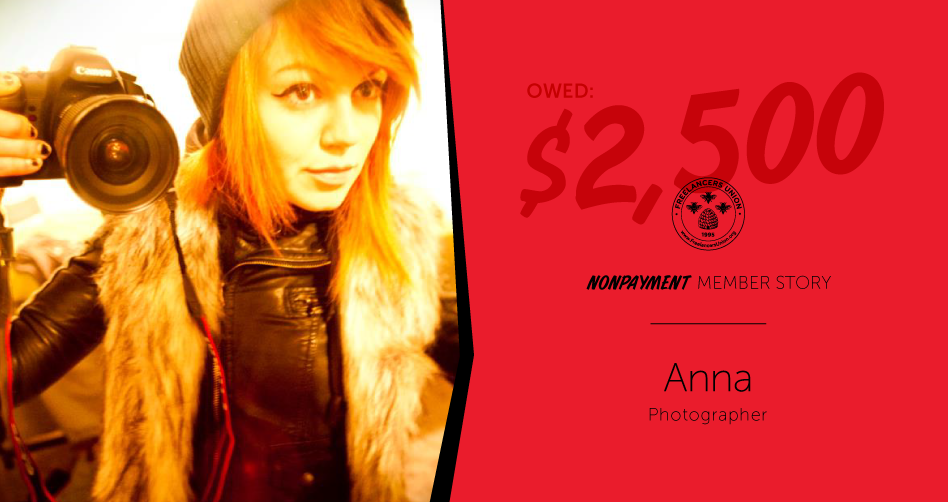 Join us Monday, December 7 for to rally for the #FreelanceIsntFree Bill!

I found this client via a craigslist job posting. I met him in-person and he hired me very shortly thereafter. I signed a 4-page contract that stipulated my rate at $40 per hour.

I started working immediately – usually about 12-20 hours per week. After a couple weeks, we started meeting in coffee shops instead of the office. I didn’t see this as a red flag. He was very polite and seemed nice.

At the end of the first month, my client told me that his big investor was delayed with his deposit and he needed more time to pay me. He mentioned that the contract stipulates that any payment delays will incur late fees at a certain percentage of the total amount.

So I kept working with him for another 3 weeks, then started to question whether this was really a good idea. He kept convincing me that his big deposit from his investor was on the way and that I just needed to be a little more patient.

He even wrote me a check for $940 for my first month, but asked me to wait a week before depositing it to my account.

During all of this, I became pregnant and shared the good news with my client. He knew I really needed the money!

I worked for a week more or so, then he asked to delay depositing the check for one more week.

At this point,** I stopped working for him and started demanding my payment through phone calls and texts. **I also went to try to deposit the check, but the bank was unable to accept it (they did not tell me the reason why).

I kept calling and texting the client for a year at the beginning of each month. Most of the time he didn’t respond. Sometimes he would promise that he would pay me it all back.

After a year he sent a paypal payment of $150 and said he would pay me back in small amounts once a month, but after this one transaction, I never heard back from him. He still owes me about $2500.

I would definitely like to take this to small claims court, but I just have a feeling that it’s not going to fix anything.

I know the process takes a lot of research, time and documentation. The thought of going through so many steps to pursue payment is daunting – especially because I’m busy now with a newborn.

Clients know that with a few well-placed lies they can squeeze work out of freelancers - why? Because the system allows it.
How far are you willing to let it go? Show your support by joining the #FreelanceIsntFree campaign.