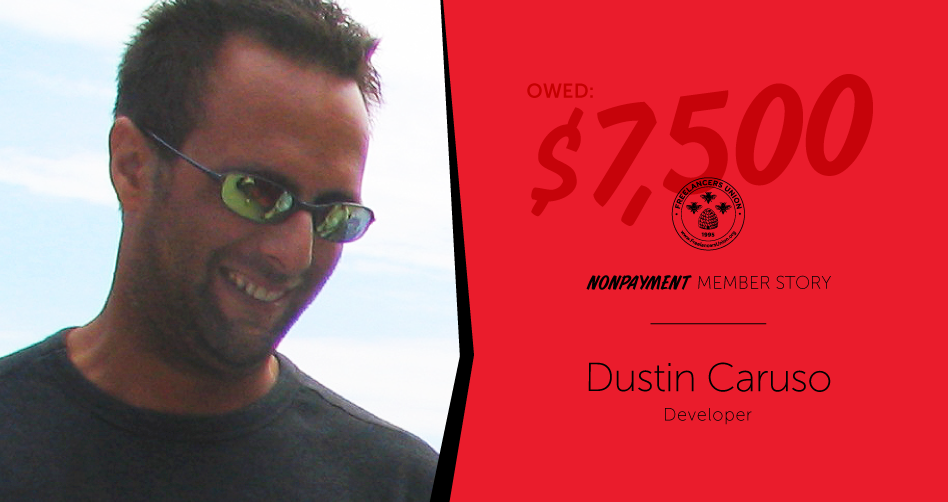 This post is part of a series of freelancer stories about waiting to get paid -- or never getting paid.
Presently 71% of freelancers have trouble getting paid by their clients and, the average unpaid freelancer is owed over $6,000 in income.
Read on for first-person accounts from Freelancer Union members facing this issue -- and their thoughts on how to solve it. Share your story here.

In the fall of 2009, my wife was pregnant with our first child. At the time, I was shutting down a start-up business that just never took off and working a new contract gig at GSI Commerce (now eBay) to make ends meet. While the job was stable, I was really looking for new opportunities.

A consultant I had worked with on the startup – one of those gurus seemed to know it all – offered me a place working on a new technology project with a company with which he had recently been working.

The technology itself was pretty cool – well, in 2009 at least. It was a flat, large touch screen responsive monitor intended for use at large trade shows. Obviously, the technology could be applied elsewhere, but it would have its trial run directing attendees and providing information at a large Chicago trade show.

My contact also seemed like a pretty cool guy and he had a prominent past: a former marine and a high-level position at a major tech firm. I trusted him. I didn't ask for a contract.

He promised me that the project would be a 3 month arrangement and then afterwards, they'd find another project to put me on and keep me gainfully employed. With my wife pregnant, I was really looking for some stability.

So, I threw away my sure thing at GSI and dove in with these guys on their promise of doing some exciting things, which included them maybe helping me resurrect my dormant startup.

At first things went really well: We were a tight crew and I enjoyed working with the CEO.

The first red flag popped up around Christmas when my paycheck was late. I got the usual excuses, but finally the check came in.

January: Same story.** I was working for $7500 a month and putting in 60 hour weeks.** My paychecks were coming a week or two late.

When I asked the CEO about it, it was always the same: "It's in the system," or "Maybe it went to the wrong address."

As we ramped up to the trade show, 60 hour weeks turned into 80 hour weeks. They were way behind on payments - I was still receiving checks for January's work.

On March 1st, the site launched and the trade show began... and I never heard another word from my contact or the company’s CEO.

After a week or so, I emailed them – wondering whether they had another project to put me on and where my final last month’s paychecks were. No answer.

I started to get nervous. I sent them email after email. No response.

Finally, it occurred to me that I wasn't going to get paid. And not just that, but that they had decided at some point during this project that they weren't going to pay me.

I was enraged; as far as I'm concerned, that's stealing. So I did what any angry developer would do: I pulled down the site.

Within minutes, I received an email from the two partners in very accusatory language.

At the time it seemed like a good idea, but in pulling down the website app, all I did was give these guys (what they believed was) a legal reason not to pay.

Things got ugly and the next fall,** I decided to take it to the Delaware Small Claims Court.** They ruled in my favor, but I wasn't able to collect.

Despite providing the constable with known locations of my former colleagues, I was told that they could not be located. I really feel that the state didn't lift a finger on my behalf.

The #FreelanceIsntFree Campaign has renewed my commitment to pursuing payment in this case. It is theft and it is about the money, but it's also about respect.

My next step will be to file a lien – I don't know if it will be successful, but I also want these guys to know that I won't go down without a fight.

Nonpayment leaves freelancers and their families vulnerable.
How far are you willing to let it go? Show your support by joining the #FreelanceIsntFree campaign.