We spoke, and he listened.

I had the privilege of addressing the President yesterday about nonpayment and the work Freelancers Union is doing to change this for freelancers. It still feels surreal.

All the credit has to go to you, Freelancers Union members. Sunday Steinkirchner kicked off the conversation by asking the president how he would tackle the nonpayment issue. You can watch the incredible exchange below.

We’ve come together and made our voice heard in Washington. And as a group, we have to build on this momentum to end nonpayment.

Join the #FreelanceIsntFree campaign to make sure you and freelancers everywhere get paid for the work you do.

Once you’ve joined, share the #FreelanceIsntFree campaign far and wide, with your friends, followers, and fellow freelancers. 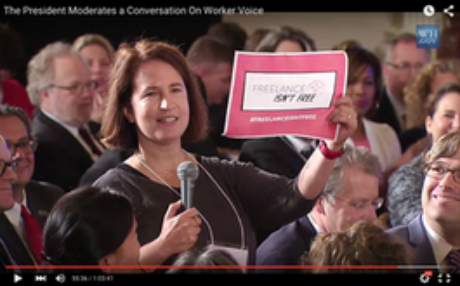 This is proof of what we can achieve as a community. We have the ear of some of the country’s most influential figures, because, together, our voices ring loud and clear.