“A real moment of obligation”: lessons from an urban farmer and serial entrepreneur 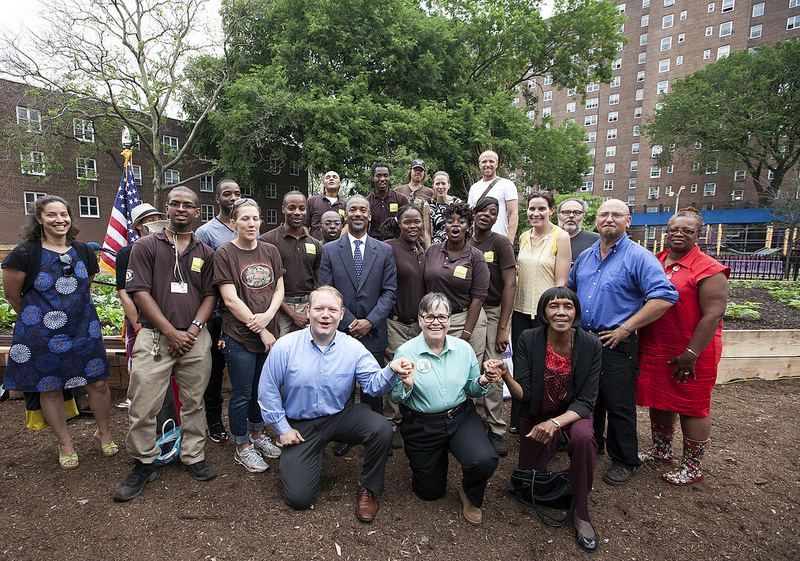 Farming, fundraising, teaching, program development – Ian Marvy does it all.

He’s been at the forefront of a DIO New Mutualist community right in the middle of New York City. He’s harvested arugula, beets, okra, and over 30 other crops from a former asphalt playground. He’s trained hundreds of teenagers and managed complex collaborations with city officials and major foundations. He even weathered Hurricane Sandy, which wrecked his farm and filled his house with nine feet of water.

When I first met Ian, he was executive director of Added Value, a non-profit promoting sustainable development through youth leadership in Red Hook, Brooklyn. Like me, he had been selected as an Echoing Green fellow. “Echoing Green fellows pick up the phone for each other,” says Ian – a sure sign of a strong network.

I recently asked Ian what others could learn from his work as an urban farmer, particularly his skill as a bridge-building social entrepreneur making an impact in several different areas at once. He replied by paraphrasing activist Van Jones:

“Urban agriculture is where restorative economics meets restorative justice. It touches on so many issues, so that people can plug into it from health and wellness, from economics, from youth, from the global climate crisis.”

Ian was developing service learning projects and running a community garden when he started Added Value with co-founder Michael Hurwitz:

“Much of the African-American population in Red Hook is from the Carolinas. And there are still kids whose families send them south, and so you would get kids talking about their family’s land…. We started to notice this bond.”

But some of the usual pitches for urban farming – tasty food, health and wellness, cultural connection – didn’t immediately hit home. What did, in a pivotal conversation with a local teenager, was a concrete plan with a bottom line:

“Take a 10 by 10 plot of land, grow the [dandelion] root out, sell dandelion root tincture, and the whole process from harvest to marketing to sales probably takes you a year. And you can either call the marketing marketing or you can call it social education, political education.”

“It was a real moment of obligation for me and my co-founder. Here this kid Timothy’s family is involved in heroin trade, and he did an ROI right there. He’s reading at a 5-year-old level, he’s 14, but he did the complex math, and said can I get a job. Added Value was conceived of then and there, based on Timmy’s need for creative work that was meaningful to him, in the community.”

Added Value opened its doors the following year, in 2001, at a time when local food, health and wellness, and “diabesity” were on few people’s radar:

“Our first year and a half, two years, was underfunded, underpaid, scraping together family money, like all not-for-profits start out as. We promised a lot to the kids and didn’t deliver 20% of that. And we spent a lot of time educating donors and meeting with funders – helping them meet the teens, who were already gaining skills and becoming passionate advocates for the work.”

Then, fueled by a transformative grant from Heifer International and inspired by a visit to MacArthur Fellow Will Allen and his staff at Growing Power in Milwaukee, Added Value took off.

Over the next several years, the organization helped build Red Hook Community Farm – “an unheard of public-private partnership to steward three acres of city land”. Not long after, Marvy was developing farms on Governor’s Island and in a local housing project. Then it was farm-based learning with elementary school students, green jobs training with public housing residents, farm-to-cafeteria programs – something new and innovative launched almost every year.

In 2012, Hurricane Sandy struck, and the waterfront community of Red Hook “took it on the chin.” The farm was out of action for a year, but the community made a remarkable collective recovery:

“Red Hook is 11,000 people, and it is physically isolated. We have a strong network of very independent-minded people and institutions, but every time somebody has a fundraiser just about everybody’s there.”

Outside help came from well-heeled neighborhoods nearby, but also in the form of food trucks from as far away as Detroit. Boat owners let residents and businesses use the gas from their boats:

“We started a local newspaper that evening. There were meetings with 200, 300 people. The medical clinic got set up. We were doing door knocking. The government says officially they’re not going to be around for 72 hours, that’s OEM policy, that’s FEMA policy. Ideally there would be a plan, but absent a plan it was all DIO – and it was enormously successful.”