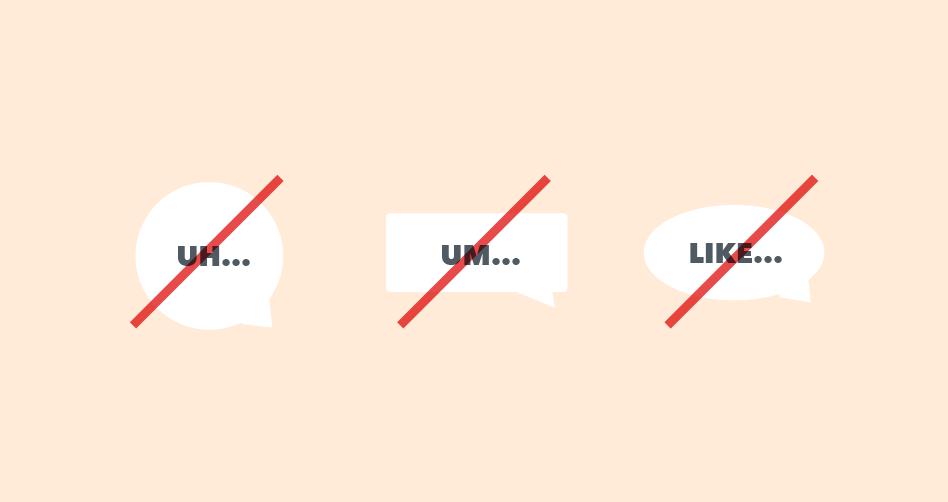 Freelancers have dozens of stressful conversations a day.

Conversations in which what we say -- and how we say it -- could mean the difference between getting a new client and losing a prospect. Between conveying professionalism and looking like a rookie.

Useless filler words are just one of many ways we make ourselves look less professional.

To clarify: filler words have nothing to do with the quality of the information your conveying, the rightness of your opinion, etc. But like it or not, delivery matters. I think most of us have watched one person say the exact same thing as another person, but because he/she is more confident and their language isn’t interrupted by signs of uncertainty (“uh”,”um”,”like”,”so”, etc.), other people nod their heads and jump on the idea.

Nothing can fix bad ideas or content, but any smart person should care that their good ideas get heard and respected.

Why you say fillers

You say filler words when your mind goes blank. When you can’t think of the right answer (or can’t think clearly at all).

But why do our minds go blank just when we need to be at our best?

Turns out that when you’re stressed, your prefrontal cortex, associated with concentration, abstracting ability, judgment, and interacting with others, goes dim. When even the very smartest and most well-adapted people are stressed, they enter a state of cognitive, emotional, and perceptual impairment.

So when you’re put on the spot by your client, your brain turns off the parts of itself that could best confront the issue. It turns off our best, most creative idea-generating selves. And our mind goes blank, and we say:

This problem is also closely related to the issue of multitasking -- another big brain stressor. In important meetings, you’re juggling a lot of things in your brain: what’s that person saying? How much should I charge? What do they think of me? How would that change the budget? Why does he have a mustard stain on his jaw?

Multitasking makes us dumb. It also make it hard for us to change tasks when someone asks a question -- so there’s a natural pause while you switch mental tasks and get your brain around answering the questions (so you say fillers).

What if you’re a perpetual filler-talker, even when you’re not stressed? Boyatzis’ research could point to the answer to that question, too. Your brain is a machine of habit. Connections that were made before are repeated. Boyatzis found that an overwhelming percentage of Americans have what he calls “chronic stress” -- a condition where our brains are so frequently in the state described above that it literally changes how our brain operates.

If you’re chronically stressed, you could have problems speaking in a fluid way in any context.

Now, there could be other possible answers to why you use fillers -- you heard your family or friends do it, for instance, and you mimic their language style. Even if that’s the case, all the things that will solve the filler issue if you’re stressed (i.e. calming down and focusing, see below), will also help you be more conscious of saying fillers out of habit.

How to get rid of um

This is my first line of defense against rambling on about nonsense because I feel like I "have" to say something. Instead of trying to come up with something brilliant or witty, ask a question to give yourself time to come up with a better answer. This is also a genuine way to get more information from the other person or the group, which will lead you to come up with a more thoughtful answer.

Instead of having a long drawn out “umm” before you begin to speak, just say nothing. You will naturally assume a facial expression of consideration and thoughtfulness, which will be much better in the long run.

This is probably the last thing you want to hear, because it’s not that easy: It’s about getting rid of your chronic stress.

This is too extensive of a topic to get into in real depth, but you probably already understand what this means and why you should be doing it.

Take the time to do things you genuinely enjoy that so absorb you that the world falls away. Meditate. Run. Do art. Pet your cat.

But it’s also more than that: it’s about being less stressed while you’re working. I know, sounds impossible. It helps me to remember that just because my work is stressful doesn’t mean I need to be stressed. Also, drinking tea while reading client emails helps.