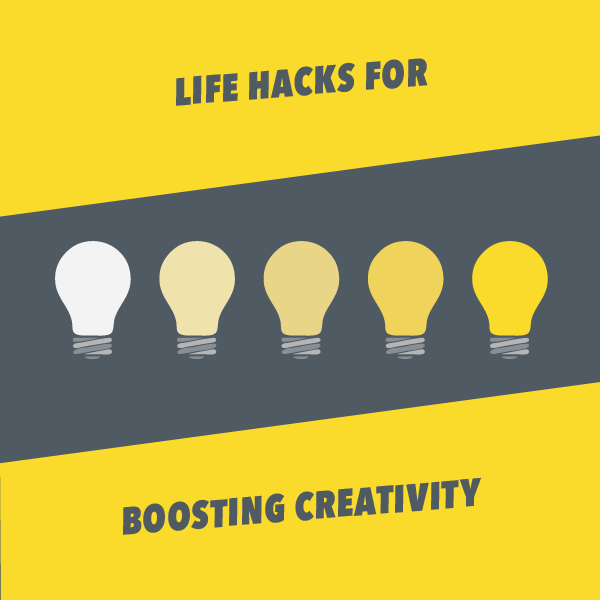 As an entrepreneurial freelancer, creativity likely plays a strong role in your business. But have you ever wondered what causes you to have your best ideas, or if there’s a way to improve creativity when you’re having an off day?

As it turns out, there’s a lot of research regarding what makes us creative and how we can increase it. Try experimenting with some of the tips below to boost creativity and inventive thinking.

Are you a night owl or an early bird? Either way, try reversing your schedule. One study found that people come up with more creative solutions when they work during their least alert time of day. So if you’re usually most awake in the early morning, try working late at night -- and vice versa.

Video games often get a bad rap, but a growing body of research shows that gaming improves creativity, decision-making, and perception.

One three-year study of 491 middle schoolers saw that students who played video games performed more creatively on a “standardized creativity test,” which measured tasks such as drawing pictures and writing stories. Cell phones, the internet, and computers did not have an effect on creativity.

Creativity boosts occurred regardless of what kind of video game was played, so don’t worry if you’d rather combat orcs than solve a puzzle.

Go for a walk.

Steve Jobs was known for his walking meetings. Thoreau, Tchaikovsky, and Beethoven all loved long walks as well. And filmmaker Werner Herzog has said that the world reveals itself “to people who travel on foot.”

As it turns out, there’s some science behind those steps. A new study by Stanford researchers found that walking, regardless of whether it’s inside or outdoors, boosts creative inspiration.

The study involved four experiments with 176 adults who were asked to think of alternate uses for a given object. Creative output increased by an average of 81% when participants were taking a walk, regardless of whether they sat before or after.

Move to a foreign country.

Dreaming of moving to Berlin? Research published by the American Psychological Association shows that people who have lived in foreign countries carry with them lifelong enhanced creativity skills. Entire countries can reap the benefits of this creativity boost as well; another study indicates that periods of immigration are a precursor to exceptional national achievements.

Or, just think about a faraway place.

Strangely, you may experience a similar creativity boost if you imagine places that are far away. In one study conducted at Indiana University, researchers found that people were better at solving insight puzzles when they were told that the puzzles came from Greece or California instead of a local lab.

Why does this work, exactly? Social psychologists speculate that experiencing “psychological distance” -- i.e., thinking about things that are not occurring now, here, and to ourselves -- causes our brains to think in more abstract ways.

This can be as literal as thinking about geographical difference, but it also works when people imagine working on projects for other people (versus themselves), or imagine problem-solving for the distant future versus the near-future.

Put restrictions on your project.

We tend to believe that we perform better when we have more freedom, but in terms of creativity, the opposite may be true. One theory dictates that purposely placing limitations on a project can increase invention. An often cited example is Green Eggs and Ham, which Dr. Seuss wrote using only 50 words in order to win a bet.

For an inspirational story regarding the power of restrictions, watch this TED Talk with the artist Phil Hansen. While in art school, Hansen developed a devastating hand tremor that prevented him from creating the pieces he loved -- until a neurologist suggested he embrace this limitation… and transcend it.

Reruns of Parks and Recreation may be working in your favor, as being relaxed and in a good mood can dramatically increase creative success. In a study by Mark Beeman, researchers found that people were better able to solve insight puzzles if they watched a stand-up comedy clip first, with the average success rate increasing by 20%.

According to a study published in the Journal of Consumer Research, background noise can increase creativity as long as it is not too loud. So go ahead and play music while you work, or try hanging out at a local coffee shop.

Look at blue or green.

A study at the University of Munich found that looking at the color green, even for only two seconds, causes higher scores on creativity tests. In nature, green is linked to growth and development, so the color is thought to spur our desire for self-improvement and mastering tasks.

Similarly, a 2009 study at the University of British Columbia found creativity boosts occurred after looking at the color blue, which encourages relaxation, abstract thinking, and inventiveness. Try working in a blue room -- or combine the two by filling a blue room with green plants!

Freelancers, what tricks do you use to boost creativity?