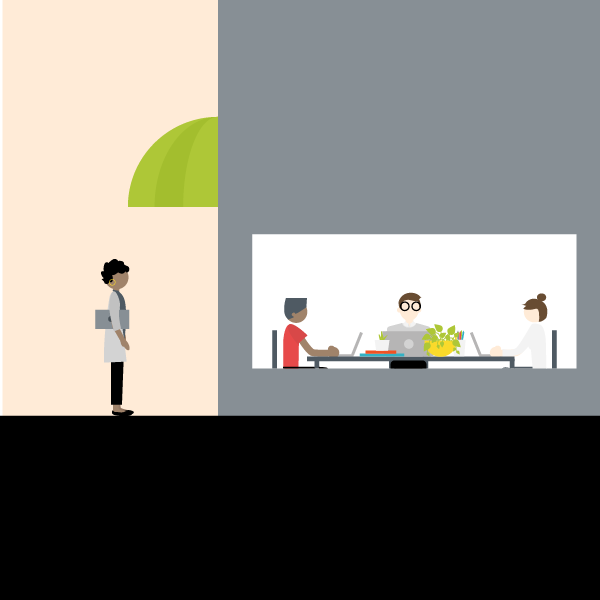 Melissa Mesku is the founding editor of New Worker Magazine, the independent publication for members of coworking spaces worldwide. She's a freelance writer, designer, and developer, and founder of Pure Cure Dental Technology. She coworks in New York City.

By now we've all heard plenty about how great coworking spaces are and why we should all run out and join one now. The coffee, the wifi, the community! It's like we died and went to freelance heaven. I agree coworking spaces are great -- I work from one -- but not everybody has the need, inclination, or ability to join. If you have passed up coworking, you don't have to miss out. There are some easy ways to take advantage of the best that coworking has to offer without having to join a space, pay a dime, or really even leave the house that much.

First, let's forget the concept of coworking spaces. Instead think of them as coworking communities. You may not need the space, but you could certainly benefit from the community. Let's look at some ways you can easily take part in coworking communities to grow your network, further your business, and find valuable support along the way.

**Find a free-range coworking group. **There are coworking communities out there that are free to join and aren't tied to a space. In New York, a roving group meets regularly to power through the workday in places as unlikely as The Met, a wine bar, and the Q train to Coney Island. While that sounds a bit fanciful, there are less quirky coworking groups, and you can find them if you're willing to do some digging. Have a look on Meetup.com: the notion is getting popular and there may already be a few groups in your area in full swing.

Go to coworking spaces during open to the public events. Open to the public events are now standard fare at most coworking spaces, and make for an easy way to dip in for some non-sleazy networking. Go during an open house, the Friday happy hour, or during a Demo Day or a Show and Tell. You'll mostly encounter people that are connected to the space but there will be some other free range workers and it's completely acceptable for you to show up. Yes, it would be inappropriate for you to start rampaging through the crowd whipping out business cards like it's a shootout at the OK Corral, but that's not what you're going to do. Instead you'll have some earnest conversations with people who are curious about you because you're not an everyday face. This is networking-lite and while it's a subtle art, it's a great way to meet other folks and start to build relationships.

You don't have to join full-time. Many coworking spaces offer a very low-commitment membership of one day per month which grants you full access to the community. This is a great deal, lets you get the most out of the space, and costs less than the price of dinner. Take advantage. Come during events you like, and choose one of your light work days to work from the space. Will you meet everyone in a day? No, but if you make it a point to introduce yourself to a handful of people, you'll come away with more than you came in with.

Maximize the one-day membership. Some coworking spaces have accountability groups and freelancer support groups that you can join with your one-day-per-month membership. As a member, you're also entitled to start your own groups in the space. Just because there are a lot of people there doesn't mean they're connecting with each other. If you voiced interest in starting a group that meets your needs, you'd probably be encouraged to go for it. You'll also be able to participate in events that showcase members and their work.

Take advantage of coworking community publications. New Worker Magazine publishes thoughtful interviews and stories for and about freelancing coworkers. It's read by the global community of coworkers and can be an easy way to put yourself in front of a wider audience. Many coworking spaces have their own internal publications that enable you to showcase your work and establish yourself in your field.

Start your own coworking group. If all else fails, you can start your own group. And no, it doesn't have to be a huge deal. I know you're busy, but it doesn't take any coordination to agree to meet at the same cafe on Wednesday afternoons. Ask around at your local laptop-friendly cafe, pick a time and a place, and start telling people in your wider network that freelancers are meeting there.

As a freelancer, just because you can't join a space full time doesn't mean you have to go it alone. Plenty of stay-at-home parents and other freelancers find value in coworking without lugging their laptop around every day. It's just a matter of being strategic and knowing what's available.

Remember that the people that run coworking spaces know their community well, and they want you to like the place enough to come back more often. Tell them what you want from a coworking community, and don't be shy about having them introduce you to people. It's not weird to admit wanting a bit of camaraderie with other professionals who happen to be strangers -- that's what coworking is founded on.