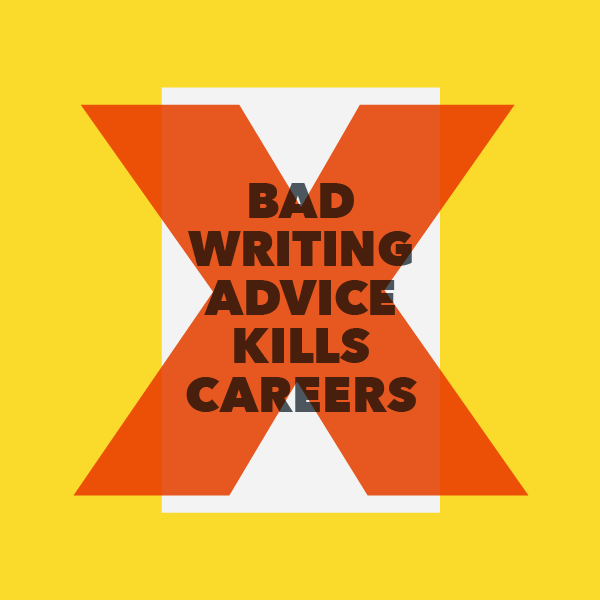 There’s a lot of advice out there on how to be a successful writer. Everything is up for debate, from how many adverbs you should use to what style is “honest” and even the sheer amount of time you should spend writing.

All the writers I know have found their own special ways of doing things. There’s not a clear-cut path, but that doesn’t stop aspiring writers from looking for magical tricks on technique, style, and seeing projects from start to finish.

While many of the things people have told me have been useful, some of it has been downright sketchy. Here’s some of the worst advice about writing that I’ve heard so far.

Write what you know.

People often say this, but sometimes great stories are lying outside of your own experience zone. Stephen King almost stopped writing his first novel, Carrie, because it was about something he knew nothing about -- being a teenage girl. When his wife found some of the novel in the trash, she convinced him that the story was worthwhile.

This might be true if you specialize in something unusual, like experimental short-short fiction. But for most pieces of writing, if enough people think it is bad or confusing, it is probably bad or confusing. That doesn’t take the sting out of realizing a piece needs more work, but being able to adapt when a project needs an overhaul is an important part of evolving as a writer.

Nowadays, quantity is the most important.

In the age of blogs and digital media, it’s easy to believe that it’s most important to produce as much content as possible. But unless you’re specifically hired for quick turnover, you’re better off writing cohesive, quality pieces over tons of short, mediocre ones.

Case in point: I have a friend at a news website who produces less posts than some of his colleagues, but he is considered one of the strongest writers because his pieces have more traffic and shares. Likewise, when I worked in e-commerce, the fastest copywriters could be problematic because they always published more errors.

To start your career, you should write XYZ for free.

This one is tricky. It’s true that you have to get your start somewhere, and it’s hard to get writing gigs if you don’t already have clips (published writing samples). It’s also true that many writers write things for free -- or do unpaid editorial internships -- while they’re trying to grow their career. But it’s important not to de-value your time and skills, or let yourself be taken advantage of.

If you’re a new writer, be very selective about writing things for free and exhaust your other options first. If you do decide that you want to go that route, try to do it for companies that will truly make an impact on your career (i.e. big name places, not some random blog that nobody’s heard of). Regardless, don’t do it for very long -- give yourself an end date or set number of pieces before you move on.

If you’re an established writer or have clips already, you really shouldn’t write anything for free unless: a) you’re donating your time to help a worthy cause or b) you’re helping a friend out.

If you take a job writing for [XYZ commercial place], you’ll never be able to do anything creative again.

I’ve heard this a lot, but I’m not really sure why since many famous novelists at one point wrote ad copy (Fitzgerald, DeLillo, Rushdie) or journalism (Hemingway, Twain, Didion). Writing for a business is not for everyone, but if you want a job that taps into your writing talents, there’s no reason not to go ahead and take the plunge. Hey, you can always quit, right?

Keep working on each sentence until its perfect.

I heard this once in a creative writing class, but if you’re an overly obsessive writer such as myself, it’s pretty much the most unhelpful thing ever. It’s always easier to edit a finished project than it is to come up with the perfect sentence each time. Thinking that writing is too “precious” can lead to a lot of unfinished projects, so try not to get stuck at square one.

Freelancers, what’s the worst writing advice that you’ve ever received?