A step-by-step guide to project proposals 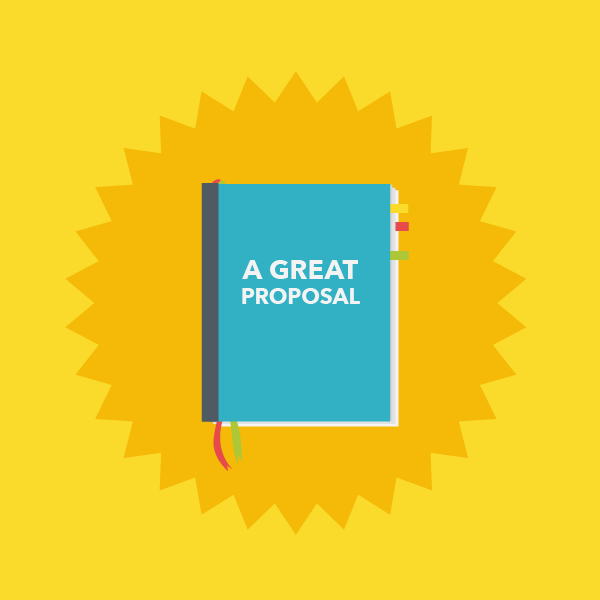 So your client asks you for a proposal, or perhaps you just think that writing a proposal would be a good idea. What do you need to include?

While a proposal may seem time consuming it is really the best way to not only organize yourself and your projects but to establish yourself as a professional who works on their own (legally-binding) terms.

Having a well-written and properly negotiated proposal and an airtight contract will allow you to sidestep potentially frustrating client scenarios.

The four parts of most projects

Bid: An indication of how much you would charge the client to carry out the potential project when you are competing with other freelancers/businesses.

Estimate: An approximation of the overall project costs based on past projects of similar scope or extrapolating on whatever information is available.

Proposal: An interpretation of the client’s specific needs and how you plan to execute and charge for it.

Contract: A legally binding agreement between you and the client that includes any contract provisions.

Project proposals and contracts may seem interchangeable, however, in reality they are two very different things, and one should never exist without the other.

The anatomy of a proposal

These items are a general framework and more or less should be a part of any proposal regardless of the type of work being done. Keep in mind that you may need to alter these based on your specific field.

1. Summary of project: Identify the scope of work.

2. Overall budget and costs: Identify what the overall project budget looks like. At this point you will have likely negotiated with the client and given a verbal or written estimate of total cost. In this section you will reiterate that estimate based on further research.

For example: The total estimated budget for this project as previously negotiated with [Client] is $3,000.00. This includes design, materials, printing, and postage.

Depending on your preferences and circumstances you will want to determine if this is an hourly-based project or a fee-based. If you choose to do hourly, you will want to break down your specific hourly rate and estimated number of hours the project will take. You may want to further add in a provision that states if x amount of hours are exceeded then the client will be charged x amount of money per hour.

Some costs may be set in stone while others may be more variable. If some of the costs are speculative make sure you indicate that within this section. Making sure your client knows this ahead of time will make it easier should unexpected costs arise.

4. Payment Schedule: Identify when you expect to be paid.

5. Provisions: Identify any provisions that are specific to the project/you as a freelancer.

For example: Client is entitled to two design revisions, after which will be billed hourly at a rate of $30/hr for any subsequent revisions. We’ve got a list of common provisions here.

6. Signatures: Even though the proposal likely won't be a legally binding contract once it has been negotiated and agreed upon, it is still good to sign off and have the client sign off on it as well.

7. Contract: After the proposal has been finalize and agreed upon, it is time for the contract. Check out this handy Contract Creator wherein you can just plug in the specifics and create a custom contract.

Freelancers, what has your experience with project proposals been?

We're hosting a live webinar with Shake Law on May 20 and 21 about contracts and other legal loveliness. Join us!