Does your business suit make you look more respectable? 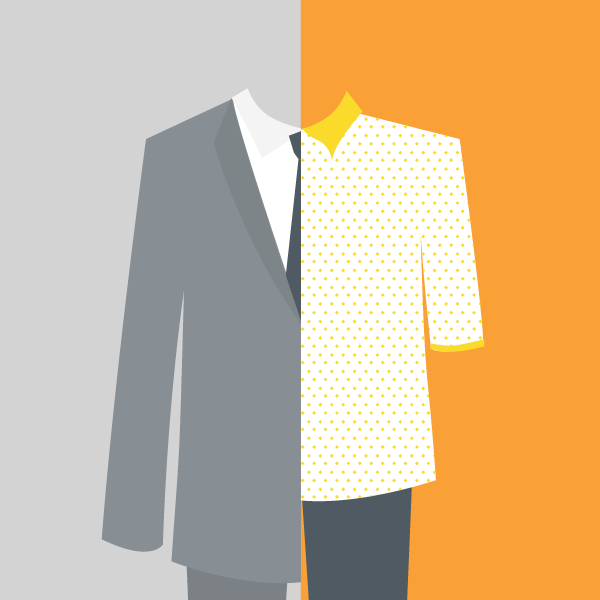 What does your clothing say to clients?

A freelancer’s business and brand is personal. It is us. At heart, it is the way we work, but it is also the way we talk, the way we socialize -- and yes, the way we dress.

The business suit is no longer the wardrobe of the new “cultural elite”: the creative entrepreneur who wears Adidas slide-ons to meetings. We’re in a time of cultural transition in business attire.

But most importantly, do freelancers benefit from bucking business dress norms?

The Red Sneaker Effect: Why non-conformity looks like power

According to a study released recently in the Journal of Consumer Research, people associate non-conformity with status, power, and competence -- because only powerful people can afford to follow their own rules.

Participants found that a man wearing a red tie at a black-tie party was more likely to be a top member of the country club, had won more golf competitions, and was more creative than other attendees. However, when those participants were told that his red tie choice was unintentional, they did not give him the same status boost.

Participants were asked to assess two professors professional statuses: one that wears a tie and is clean-shaven, and another with a beard and a t-shirt. Students guessed that the nonconforming individual had a higher status and skill level -- but only if they knew that the professor worked in a prestigious context (Harvard) and that there were established norms (formal wear).

So what can we learn from this? People admire those who don’t conform, but only if it is perceived that they are acting consciously to violate the norms in prestigious contexts, and not just committing a faux-pas unintentionally.

The key here is autonomy.

People with autonomy follow their own rules. According to a significant body of research (Dworkin 1988; Markus and Schwartz 2010; Kim and Markus 1999), Western cultures especially place high value on individualism and independence, and the capacity for self-governance indicates status. Thus in our cultural context, autonomy is seen as powerful and attractive.

If you can afford not to dress like everyone else, you must be powerful enough not to have to worry about the usual negative effects of non-conformity (like being an outcast or being spurned by the herd).

When I read the above study about the scruffy Harvard professor, my first thought was: but those are students. They’re young. And they’re probably students with high levels of cultural awareness about the top wage-earners in America in jeans and sneakers, flip flops, or open-collared linen shirts.

They’re living in the era where the new billionaires -- or at least the ones we talk about most often -- are young and scruffy. (And yes, as usual, male.)

When these CEOs have the kind of cultural visibility and status they do, scruffiness-as-status-symbol is bound to spread. Although thoughtful New Yorker pieces, the entire tech start-up industry’s dress code, and growing Millennial support for flexible work policies are just the first few signs of this trend, I expect research studies will follow.

Freelancers are by definition autonomous. We are both economically self-governing and self-regulating. If it is to be believed that our culture sees individualism, independence, and “resisting group pressure...as a brave and bold gesture,” then certainly autonomy and non-conformity is seen as a positive trait in freelancers -- right?

The same study referenced above did not test the impact of dress between professionals, or the impact of dress on perceived levels of professional competence during networking, hiring, or group collaboration. But it did find that in general, the observer’s need for uniqueness affected how they perceive the choice to dress differently.

To put it simply, do your clients want you to be unique and/or creative? Is originality part of the service they expect from you? If it is, then they’ll like your red sneakers.

The bottom line: If you want to understand the impression you’re making on your client, understand what they’re looking for.

The power of not needing the gig

What Color is Your Parachute made popular the idea that if you seem like you aren’t desperate for a job, you’re more attractive to potential employers.

Self-confidence and knowing your own value make you appear more valuable. So non-conforming clothing further indicates your autonomy (“I don’t need you”), which indicates confidence (“My uniqueness is my value”).

If your ideal client is someone who will value your creativity, and if you make a commitment to be selective about the types of clients you take on, you can afford to wear those red sneakers to a client meeting. Your lack of desperation for their work makes what you wear irrelevant, or at best, only reinforces your value to potential clients -- precisely because you don’t need them. Yes, this is hard.

What do you wear to client meetings? Does this change based on the client? Does how your client perceives you matter?