Moving from Consumption to Connection 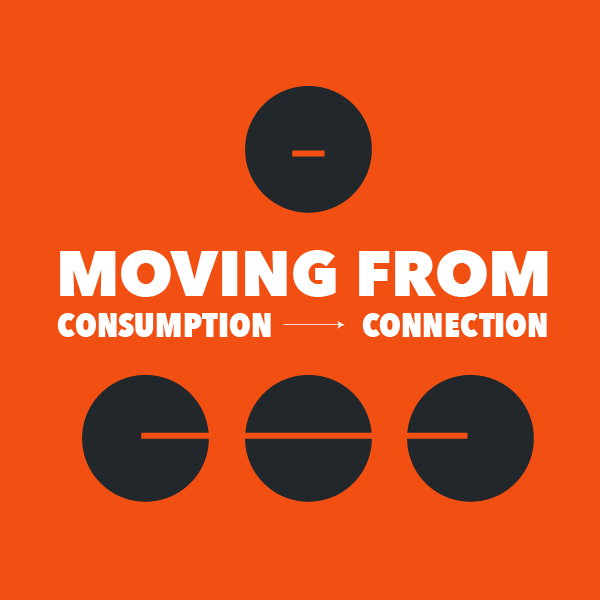 How can you tell that the ideas of the Quiet Revolution and New Mutualism are taking off? When Maria Shriver's Shriver Report comes asking about it. Here's a transcript of an interview I did with them.

Independent workers now account for one third of the American workforce. How has our culture and economy contributed to the size of that number?

I think it’s that the whole way we work now is just completely different. It’s not like you get all your income from just working. You don’t have one job for 40 hours a week for 25 years. Instead it’s either a bunch of gigs or in some ways you start to rethink and you’re having a sideline business, like a craft on Etsy or hosting on Airbnb, and that’s your revenue, and you’re not even thinking about it as work. People are putting together their lives in completely different ways.

How is the shift towards independent work changing our attitudes towards our work?

In America we’re so identified with our work, but I think it’s that now you can do any number of things. You know, we have members who are martial artists, actors, accountants, technology people. People really put together their lives in such interesting, different ways now. And I think that what happens is when you work independently you have to really think about it more. You think about how you plan your day more, where your money comes from, and once you start to think about it, it gets you down a different path.

People really put together their lives in such interesting, different ways now.

You start to say, “How much work do I want to do? When do I want to do it? Do I want to be home when my kids come home from school? Do I want to make sure that yoga, or something like it which is important in my life, is the base of my schedule upon which I plan other things? People start to think about food and where their food comes from. They think about their expenses, and they say, “You know, it starts to make sense for me to want to put my money in a Credit Union or to go to a food co-op.” And that’s, I think, where you really see these changes.

If you look at consumption, the total number is increasing, but it’s actually only increasing for the top, top wealthy people. Everybody else is just not consuming in the same ways...

And what is really interesting is that we’re starting to see these really big national indicators start to change. So, if you look at consumption, the total number is increasing, but it’s actually only increasing for the top, top wealthy people. Everybody else is just not consuming in the same ways, and I think that’s really extraordinary.

Is it that tough economic times have made people reassess how the economy works for them?

I think it goes in building blocks. People start thinking about what’s happening to them and their personal situation. Then they’re noticing that their money’s not going as far as it did before, and while people really maybe preferred to have a full time job with benefits, those jobs just aren’t available or are extremely hard to come by. And so they start to ratchet down and away from that as the norm to this new gig economy as the norm. I think people really start to think, “Why am I living like this?”

It makes sense if you think about it; the 40 hour work week was a wonderful thing, post World War II it guaranteed you income security, you could put kids through college, you could buy a home. All those consumption things really were rewarding for people and they could manage them. What we’re seeing now is that there’s no way you can, but you can actually have a better life. I think that’s what is making this thing move at like a 60 mile per hour rate; people are saying, “Wait a minute. OK, I can actually now have time, and time is such a luxury, and really I can not consume so much but do these other things." And you just see that happening everywhere.

For instance we have something on our website called The Quiet Revolution map and we have had people all over the country map their local communities and show the Farmer’s Market, the Credit Union, the interesting art spaces, the co-working spaces. So that people can go to that map and look at it and see if it’s helpful. And they’ll start to find other organizations and other great resources. And that’s what we really want to do, is make it really easy for people to see that it’s everywhere and it can impact you meaningfully in a very personal way.

Well, you know, on the one hand, we’re seeing more wage inequality now then we have in 100 years and women in particular have been on the bad side of that, but I would say that women are really nimble. So they are really at the forefront of figuring out these new ways.

I often feel like we talk about work-life balance as if women are suffering, but I actually think it’s men who have suffered because they haven’t had the easy way to be as connected to their kids and their family. And I think that women are seeing that there’s a way to reorganize things that’s just sort of a healthier way to be.

How has the mission of Freelancers Union evolved over time?

When I started this it was really about saying that there are all these people who are working in this way and that we need to start thinking about what’s the new kind of social safety net. But the first order of business was to really get our freelancer’s union in shape, to really be an institution that could help people move to this new way. And when we started talking to our members, their number one issue was health insurance and health care. So we built an insurance company from scratch over the years that has really served our members well.

We pioneered a new way to actually do insurance that a lot of the industry is following now. We built two medical practices that have primary care for free and are planning more. And now that our institution is really getting sturdy we want to start talking about the social movement of change. How do we as a society transform ourselves? Independent workers, by the very way they are working, this new way, are the vanguard. They’re the ones who are showing us the future.

Can you explain this idea of “New Mutualism”?

I think we all intuitively realize that we’re not heading into a time of more government. It’s not like we can just say that there’s a problem and government is going to solve it. We have to start to realize that it’s about us coming together, as we always have, to start to think about what we need.

We’re not heading into a time of more government. It’s not like we can just say that there’s a problem and government is going to solve it.

And it really is looking at markets, but not in the way of markets that make only a small number of people super wealthy, but in the way that we can set up our own local businesses and organizations, and then start to really build those out.

“New Mutualism” is that independent workers in New York came together and built an insurance company, and we now have had three years of zero premium increase, rebates and free medical care. We have to start building our own institutions and there are these great models for it from the 1920‘s; it was called Social Unionism, and the unions of that time, mostly the garment workers, built housing and banks and insurance companies, and they weren’t backed by venture capital, they were backed by social purpose businesses. And I think that’s the next era: foundations, government, new kinds of businesses that are about social purpose and coming together and building this next infrastructure. That’s the interconnection between us all: the New Mutualism. It’s the mutual connection between us, and that’s what we build upon.

What are some key steps that someone should take if they are transitioning into freelance work?

Concentrate on giving back and what you’re going to find is that the more you give the more you get. And that network will sustain you, help you, and that’s who you will help. You will have dry spells, you will call that network and tell them you need work; they will help you find work, just the same as someone will call you. Freelancers who do it on their own, just by being alone and isolated, really will fail. It’s the ones who really get connected to other people; it really is New Mutualism in the every day. Really concentrate on building those loving and great relationships.

What inspired you take up this work and what continues to motivate you?

I think that I was really lucky to grow up at a certain time and to have influences that really made me realize that the world was about something larger than myself, and to feel confident in that. I come from a family where I’m a third generation person working in the labor movement. I actually never met my grandfather, who was a labor leader, but stories told about him, mostly by my mother, really made him very much alive for me. And then I went to Quaker schools, and Quakers have a wonderful tradition of civil rights and women’s rights and doing the right thing. And then I started to build an organization where I got to meet and work with independent workers who really were the ones who were leading just huge change and to just be co-designing things and learning from them. It has been the great joy of my life.