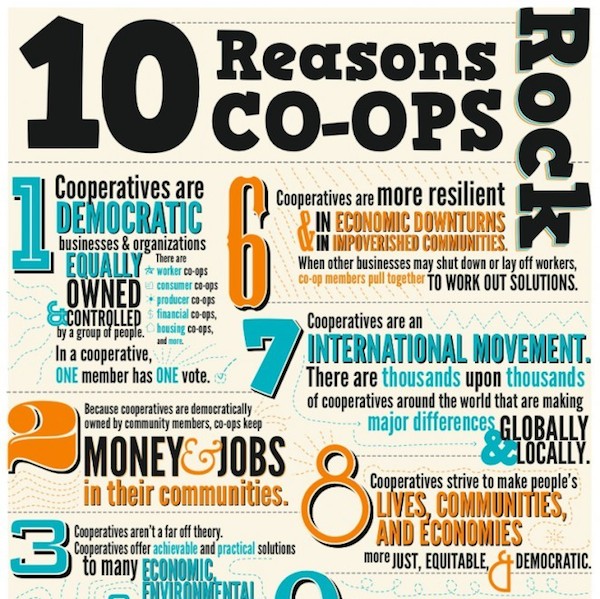 Why are freelancers and co-ops made for each other? Because as freelancers, we know what a big difference ownership makes. We've seen what it's like to have our hard work go to some investor or firm or person we’ve never met (hello, 9-5s!). Freelancers own businesses and understand how empowering it is to own their work. But freelancers don't just stop make this change in their own lives; they're Quiet Revolutionaries who want to empower others to organize and support their local communities.

Our friends over at the Toolbox for Education and Social Action put together this great list of ten reasons co-ops rock:

1. Cooperatives are democratic businesses and organizations, equally owned and controlled by a group of people. There are worker co-ops, consumer co-ops, producer co-ops, financial co-ops, housing co-ops, and more. In a cooperative, one member has one vote.
2. Because cooperatives are democratically owned by community members, co-ops keep money (and jobs) in their communities.
3. Cooperatives aren’t a far off theory. Cooperatives offer achievable and practical solutions to many economic, environmental, and social problems that can be implemented right now.
4. Co-ops aren’t charity; they’re empowering means for self-help and solidarity.
5. Members of cooperatives equally share the burden in hard times and equally share the benefits in good times.
6. Cooperatives are more resilient in economic downturns and in impoverished communities. When other businesses may shut down or lay off workers, co-op members pull together to work out solutions.
7. Cooperatives are an international movement. There are thousands upon thousands of cooperatives around the world that are making major differences locally and globally.
8. Cooperatives strive to make people’s lives, communities, and economies more just, equitable, and democratic.
9. There’s no one right way to do a co-op. They can be flexible to fit different community and individual needs. There are big co-ops with thousands of members, and there are small co-ops with 3 members.
10. Cooperatives are viable and just alternatives for meeting our economic and social needs in contrast to corporations that exploit people and the planet. 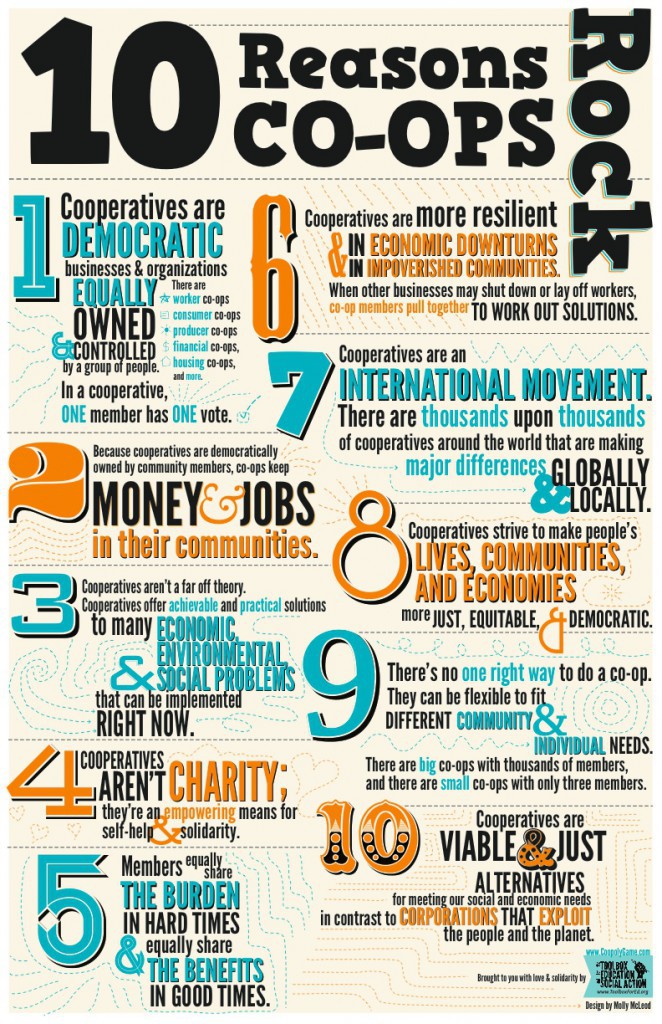 This awesome poster is available for sale here. Graphic design by Molly McLeod.