Are lefties more creative? Myths and facts about left-handed people (and birds) 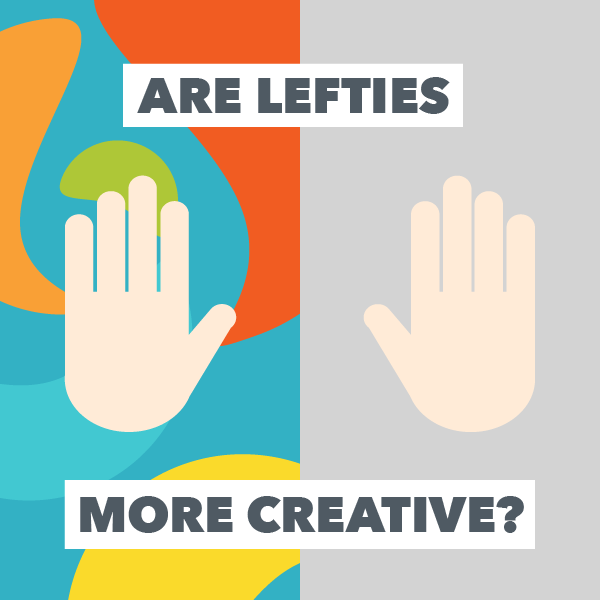 You may have heard the rumor that left-handers are more creative and entrepreneurial. As a creative and entrepreneurial freelancer, this myth may have lead to either an inflated sense of self-importance or an unhappy sense of rightie-worthlessness (only partially compensated by the ease with which righties can use cameras, can openers, and power saws).

If there are so many more righties in the world (around 90%), this begs the question, why do lefties even EXIST? Nowadays having the advantage in hand-to-hand combat isn’t as important as it may have been to our genetic forefathers. Nevertheless, left-handers press on, and have accumulated quite a few myths over the years.

Myth: Lefties are more creative: Anecdotally it can be shown that large numbers of artists and musicians are often left-handed. This is further propagated by the notion that the right side of the brain, which is attributed to creativity, controls the left hand. The whole right brain, left-brain thing is a bit simplistic in theory, which doesn’t give the theory much weight scientifically.

Myth: Lefties are more entrepreneurial: Similar to the previous myth there has been anecdotal evidence to show that creativity lends itself well to entrepreneurship, and many examples of successful left-handed entrepreneurs can be found. However, there has been no significant scientific correlation found between the two.

Myth: Lefties are shunned from society: Okay, perhaps a bit of an overstatement, however, while lefties rally against the right-handed bias of a lot of products (think: spiral notebooks, school desks, scissors, etc…), it’s not like anyone is being rounded up and sent to a remote island in the Pacific.

Myth: Righties outlive Lefties: A few scientific papers were published that claimed to find that on average, right-handed people lived nine years longer than their left-handed counterparts. These findings were discredited due to the fact that older people are less likely to identify as left-handed. Interestingly, recent studies have shown that we get more mixed-handed when performing manual tasks as we age.

Fact: Lefties are better at sports: In sports where competitors are face to face, such as boxing or tennis, left-handers have a distinct advantage. This is mainly due to fact that athletes are more likely to face off against right-handed opponents (which 90% of their opponents will be), so it may be difficult to predict and react to the moves of a left-handed competitor.

Fact: Lefties have their own day: International Left-Handers Day was founded by the Left Handers Club in 1992 and is held on August 13th. According to the club “it is an annual event when left-handers everywhere can celebrate their sinistrality (left-handedness) and increase public awareness of the advantages and disadvantages of being left-handed."

Fact: Left-handed folks are called “southpaws”: The origin of this phrase is largely unknown, although some claim it comes from the way early baseball fields were oriented, and what cardinal direction pitchers arms were facing.

Fact: Parrots are 90% left-footed: Completely useless information for most people, but you never know, may come in handy one day.

There is a whole lot of really interesting information out there about handedness, and if you are looking to get on an internet downward spiral, might I suggest this site.

Completely Scientific Study of Freelancers: How many of you folks are left-handed? Take our 1-second poll!