The Legacy of the Triangle Shirtwaist Factory Fire 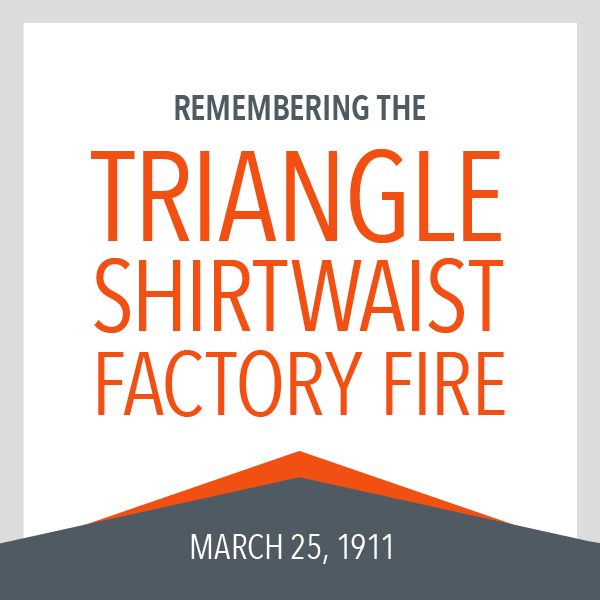 There are moments that change everything.

One hundred three years ago today was one of those moments.

Just before 5 pm on March 25, 1911, a passerby saw smoke coming from the 8th floor of the Triangle Shirtwaist Factory at 29 Washington Street in Manhattan’s Greenwich Village.

The hundreds of girls and young women working in the factory tried to escape the smoke and fire. But they found the stairwells and exits locked -- a too-common practice at the time allegedly used to prevent employee theft and “unauthorized breaks” by employees.

The fire tore through the factory. Women screamed from the upper windows as horrified pedestrians watched, helpless. Many of the women jumped to their deaths in an attempt to escape the smoke.

All told, 146 garment workers (123 women, 23 men) died. They were mostly in their late teens and early 20s. The youngest were two 14-year-old girls. Most were recent Jewish and Italian immigrants.

It was one of the worst industrial disasters in American history.

But it was also a turning point. The unionized women of the garment industry saw that they were stronger together and pushed for changes to work laws. Many of the employment and social safety-net laws we take for granted got their start in the aftermath of the fire.

Frances Perkins -- the nation’s first Secretary of Labor (and first-ever female cabinet member) -- was blocks away from the fire and ran over to see women jumping out the window. Transformed by what she saw, she formed the New York City Committee on Public Safety help get workers shorter work-weeks and other protections.

But the garment industry workers also realized that just improving their lives on the shop floor wasn’t enough. That’s why the garment workers’ unions (International Ladies Garment Workers Union and and Amalgamated Clothing Workers of America, in particular) led the social unionist movement of the day. They built banks, housing, education programs, even collective vacation get-aways for their members.

They understood that the real power comes when you own the institutions that you need, instead of asking your employer to take care of those needs. There’s a lot we can still learn from their example.

The Triangle Shirtwaist Fire is one of the greatest workplace tragedies in American history. But the legacy of the fire should be deep and lasting impact made by the workers and those they inspired.

What happened to the Triangle Shirtwaist Factory’s owners?

Not much. They survived the fire by fleeing the the roof and were later indicted on charges of first and second degree manslaughter. The two men were acquitted, but they lost a subsequent civil suit -- the plaintiffs won $75 in compensation for each deceased victim. Two years after the fire, one of the owners was arrested a second time in for locking the door in his factory during working hours. He was fined $20.