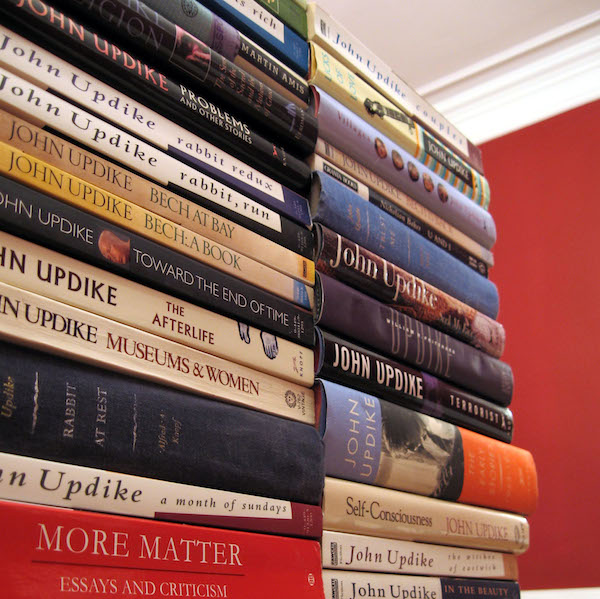 The start of a new creative project is almost always wonderful and exciting. But all too often, halfway through a project, you hit a wall: your inner critic is telling you how bad the thing is and you’d much rather chuck it and start with something new.

John Updike, 2-time Pulitzer Prize winner and bestselling author, would have turned 82 this week. He was also a methodical writer who knew what it takes to get stuff done (forward the video to 8:10):

John Updike: “Any sentence could be stifled by the critic and won if you allow him to get the upper hand. But by and large, and keeping in mind that I am a little wary of the inner critic in me, once you start to try to put images and words of dialogue together, in some way the imaginary world takes over and mercifully shuts out all these harassing critical thoughts that you might otherwise entertain.”

Even Pulitzer Prize winners sometimes disklike their own work. Listen to how Updike describes trying to finish Villages:

John Updike: “This present novel that will be out -- Villages -- I several times thought it might be a bad idea and kind of abandoned it. So, it was really the habit -- the habit of writing that kept me at it in the end. It was like a bad marriage. I mean, whatever. This is the wife I'm married to here, and I'm going to finish this book. Finishing it becomes the only way to get rid of it. So yes, it's good to have a certain doggedness to your technique. “

Updike wrote 3 pages a day at least, and wrote for 3 hours in the mornings. This kind of system allowed him to write a book a year:

John Updike: “Since I've gone to some trouble not to teach, and not to have any other employment, I have no reason not to go to my desk after breakfast and work there until lunch. So, I work three or four hours in the morning, and it's not all covering blank paper with beautiful phrases... I try to give about three hours to the project at hand and to move it along. There's a danger if you don't move it along steadily that you're going to forget what it's about, so you must keep in touch with it I figure. So once embarked, yes, I do try to stick to a schedule.”

Freelancers, how do you finish projects you're not into anymore or you're critical about? What are the systems that allow you to push through?