Is creative writing better with a pen? 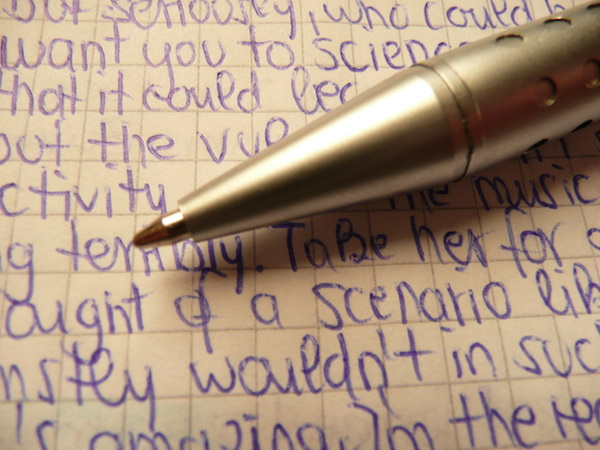 As a freelancer, I write both for work (copywriting) and for pleasure (fiction, during off-hours).

When I’m doing business writing, I write on the computer. When I’m writing fiction, I outline, brainstorm, and do character sketches with a pen and notebook, then go back and forth between writing on a computer and in a notebook. From my initial research and surveying friends and family, this “blended approach” seems like the practice of many writers, while others are staunchly pen-only or typists.

But no matter how you write, I think most of us would agree that typing and handwriting feel like very different processes.

One hand or two

Anne Mangen of the University of Stavanger in Norway studies what goes on in our brains during the creative writing process. She believes that the high degree of interaction between the physical process of writing (whether typing or writing with a pen) and the thought process of writing and imagining has largely been ignored by scientists.

One of the most interesting questions she raises in her work is the difference in the brain when you write with one hand (handwriting) or two (typing).

Many psychiatrists propose that some two-handed tasks -- like playing a musical instrument or sports, or any manual craft -- that require the close coordination of both hands lead to stronger connections between the hemispheres that may be correlated with greater creative ability or overall well-being. Expert typing ability may produce similar effects, though this is still a new and largely unconfirmed area of research.

If you ask anyone who prefers typing over handwriting, chances are they are going to tell you that they type much faster than they write, and the don’t want to “miss” any of their thoughts as they come.

It’s true that (most) humans type much faster than they can write. Just look at the findings of another study that asked participants to write two reports, one on a computer and one on pen and paper. They had three hours to write the report. (Note that this was not a creative report.) They found:

Many writers will tell you that they get frustrated with handwriting and even skip words and sections in order to get all their thoughts down before they lose them. However, other writers will say that the slow pace of writing allows them to think more deeply about what they’re writing.

The same study found that computer typers revise as they write, whereas handwriters revise after they write or after a longer section of writing.

This is no doubt due to the ease of backspacing and revising on computers -- a messy affair full of crossouts and arrows on paper. As the researchers observed, handwriters seemed to plan out the paper more in advance and approached the paper systematically, whereas computer typists just dove right in and made changes along the way.

How do you write?