How do you pay taxes in the sharing economy? A live Q&A 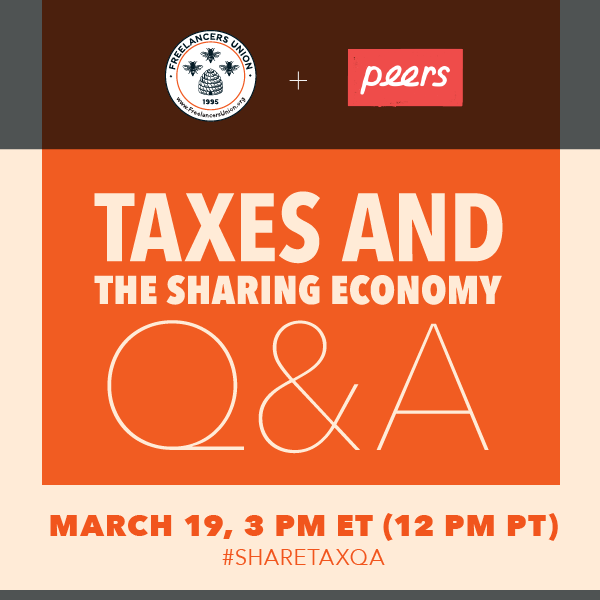 People are piecing together their income in all kinds of ways we never would have thought possible even a few years ago.

There are now freelance accountants who rent their extra room on Airbnb, sell some handknit scarves on Etsy, all while picking up Lyft rides on the side -- and, of course, playing bass in a punk band at night.

But the government infrastructure hasn’t caught up to the way people are actually living their lives, especially when it comes to taxes.

If you’re drive for RelayRides, can you claim part of your car payment as a deduction? Can you write off the circular saw you bartered on Neighborgoods? Is the photographer you got to take pictures of your Airbnb rental considered a business expense?

Those questions are hard. That’s why Peers and Freelancers Union are teaming up to help you find your way through the wild, wooly world of taxes in the sharing economy.

Join us at 3 PM ET, Wednesday, March 19 for a Q&A on taxes in the sharing economy.

Ask your questions now on Twitter at #ShareTaxQA or leave them in the app below and our friendly neighborhood accountant Jonathan Medows, CPA will answer them as best he can. (Be prepared: Some of these tax questions have no good answer yet. That’s why the tax system needs to catch up!)

Peers is a member-driven organization that supports the sharing economy movement. We believe that by sharing what we already have — like cars, homes, skills and time — everyone benefits in the process. The sharing economy is helping us pay the bills, work flexible hours, meet new people or spend more time with our families. We think it’s how the 21st century economy should work, so we’re coming together to grow, mainstream and protect the sharing economy. For more about the Peers team, click here.

Freelancers Union is the nation’s largest group representing the new workforce. With 235,000 members, Freelancers Union believes all workers should have the freedom to build meaningful, connected, and independent lives – backed by a system of mutual and public support. Nearly one in three American workers is independent. That's 42 million people – and growing. We're lawyers and nannies. We're graphic designers and temps. We're the future of the economy. Freelancers Union serves the needs of this growing independent sector. We're bringing freelancers together to build smarter solutions to health care, retirement, wage security, and other broken systems. We call it New Mutualism. You can call it the future. For more about Freelancers Union, click here.