What are the best banks for freelancers? 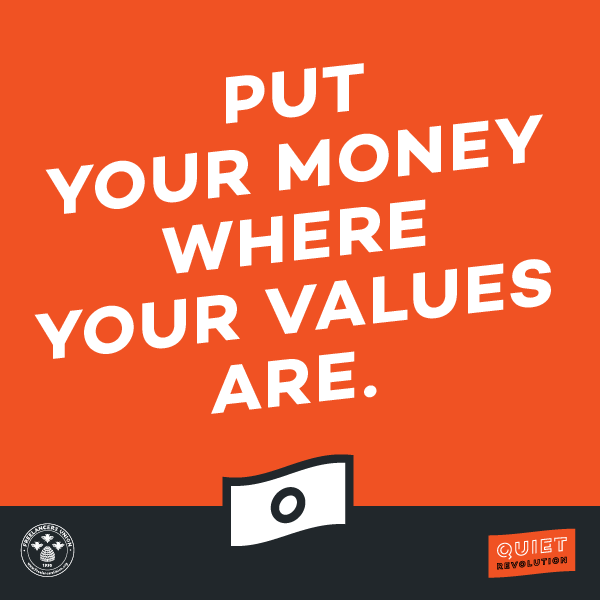 What if your bank wasn’t just a place that held your money, but was actually aligned with your values and worked for the good of your community?

We’ve been thinking lately about how freelancers are redefining success and making sure every aspect of their lives -- from food to workspace to finance -- align with their values and passions. We call it the Quiet Revolution.

If you want to find a bank in your local community that matches these values, check out our Quiet Revolution map and click “Banking,” and search in your local area. If you already bank somewhere you feel supports theses values -- which are also discussed below -- please take a moment to put it on the map!

Let’s put our money where are values are.

What actually is a big bank?

A bank is a for-profit financial institution ultimately accountable to its owners or shareholders. So for a publicly traded bank like J.P. Morgan Chase, anyone can buy a share, but the bank is controlled by the people who own the most shares, typically large institutional investors (think hedge funds, mutual funds, endowments).

The owners of a bank obviously have an interest in making as much profit as possible, and this often comes in the form of high interest rates and an abundance of fees and penalties.

Every dollar you put into a savings or checking account at a big bank is fueling their growth - not because they take your dollar and keep it for themselves (after all, it’s your dollar) but because this improves their ability to raise capital and pursue new initiatives.

Do big banks align with your values?

Obviously, freelancers are not against making profit. Profit is what keeps our careers -- and America -- going. The question is: for what and for whom? Are they sustainable? Are they focused on making America a better place? Are their values aligned with yours?

You probably know where we stand on this, but it’s a question you’ll have to answer for yourself.

What other options are available to us?

A credit union offers many of the same services as a bank -- savings accounts, debit cards, loans, etc. -- but is structured very differently.

When you open an account at a credit union, you become a member of the credit union. This membership entitles you to one vote in the election of the Board of Directors, whether you have $25 or $2.5 million in your account. The Board is composed of members and are volunteers, not paid for the position.

There are thousands of credit unions around the country. To find them, first try to check your local community on the Quiet Revolutionary map. If there aren’t any in your area, look at this listing, but be sure to come back and map it so that other Freelancers Union members can find it!

Labor banks are financial institutions founded by worker unions, often to support the members of that union. Amalgamated Bank is perhaps the most well-known of its type: formed in 1923 by the members of the Amalgamated Clothing Workers of America, it is currently the largest majority union-owned and unionized bank in America with more than 20 branches in 5 states.

Unlike credit unions, you do not become a part-owner of the bank when you open an account there. Like a traditional bank, Amalgamated has shareholders -- but 59 percent of the bank is owned by Workers United, a worker union, so profit ultimately serves workers. The other 41 percent is now owned by two financiers who both have a long history of supporting worker unions.

There are other labor union banks around the country. Check your local community on the Quiet Revolutionary map to see if there are any in your neighborhood. If you end up finding one, be sure to come back and map it so that other Freelancers Union members can find it.

While community banks are privately-owned financial institutions, their size and focus distinguish them from larger, multinational banks. According to the FDIC, “community banks focus on providing traditional banking services in their local communities” and as a result, these banks develop a close relationship with their customers.

To find community banks in your neighborhood, check out the Quiet Revolutionary map or visit here. If you find one that’s not on the map, be sure to map it here so that other Freelancers Union members can find it.

Freelancers, do you want to put your money where your values are? Check out the Quiet Revolution Map and click “Banking,” then search in the upper lefthand corner for your town. If you don’t find anything on the map, help others -- search for credit unions or labor banks in your area, and then add it to the map.

A credit union with a conscience in San Francisco.

Submitted By: Rachel A Buddeberg