How to Make Laws that Actually Work for the New Economy 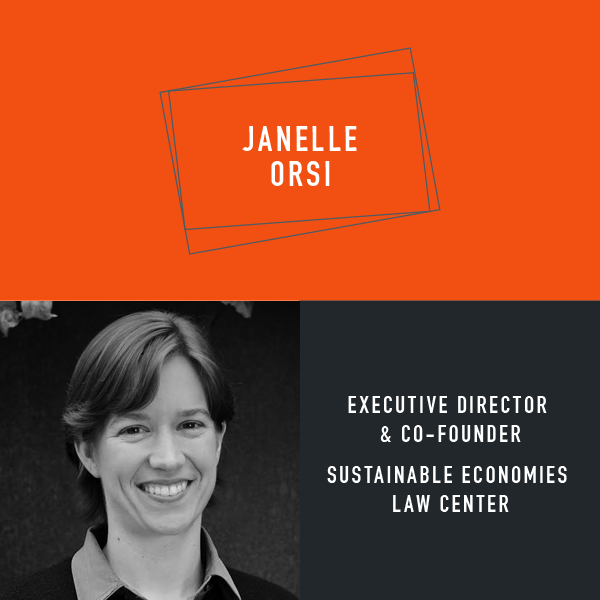 The rules for the new economy haven't been written yet. Well, they have...it's just that they were written 50+ years ago when the 9-to-5, 30-years-and-a-gold-watch career path was the rule, not the exception. They haven't kept up with the changing economy or the new workforce.

The laws and regulations laws that guide the economy have to adapt to the way people are working and building their lives. That's where Janelle Orsi comes in.

Janelle is the innovative founder of the Sustainable Economies Law Center, an organization that "charts the changing legal territory of the new economy, educating communities and individuals about the possibilities and limits of creative economic structures, and advocating for laws that clear the way for more sustainable economic development."

Basically, Janelle is laying down the law for what's next. Recently, I had a great talk with Janelle about what our laws have to do to catch up to real life.

**Sara Horowitz: So why don’t we start with a little bit about who you are and what your practice is about. **

Janelle Orsi: I call myself a sharing-economy lawyer. When I started my law practice six years ago, my focus was on shared housing, farm co-ops, car-sharing programs and so on.

Another attorney, Jenny Kassan, and I began to realize that our clients were doing amazing, creative things to contribute to a more economically just society, but a lot of what they were doing--things like raising money to form a worker coop or engaging in urban farming--were technically illegal.

So we co-founded the Sustainable Economies Law Center to look into those legal barriers and begin to change them.

Sara: How is the center funded?

Janelle: We get funding by scraping together as many resources as we can from foundations and individual donors. We’re up to six full-time employees. And it’s still not clear where the funding will come from. We provide some legal services, but our primary work is education, research, and some policy making.

Janelle: Initially I thought we could just create more democratic and sharing economies alongside the current exploitative and extractive economy. But I realized that our regulations are tailored to fit into an economy centered around very large businesses. These regulations are important, because workers and consumers would otherwise be quite vulnerable in their transactions with large and powerful businesses. So employment laws were designed to protect employees, health and safety laws were designed to protect consumers, all within the context of that type of business relationship.

But with a sharing economy – and by that I mean a pretty broad range of activities – relationships are typically designed to provide and nourish, not exploit and extract. When you try to apply the same legal protections, it makes it hard for sharing economy projects to get off the ground.

Sara: It’s true that almost every group in this space has experienced government push-back. It seems like changes aren’t going to be generated from Washington -- they’ll be generated more regionally.

We’re seeing areas where city governments or communities embrace sharing, and these local areas will then have to be stitched together. What do you think?

Janelle: There are definitely federal, state and local laws that need to be changed. A good example is there are a lot of companies that want to do a type of Airbnb for restaurants--basically, enable people to have restaurants in their homes, or just plan a meal and have strangers come over to eat and pay you.

But many legal issues come up, like zoning: you usually can’t have a restaurant in a residential area. That would be a local law.

Then there are health and safety laws, which are usually set at the state level.

The people who work with these small-scale enterprises could potentially be seen as employees, so that brings up employment laws, which are partially established at the federal level.

Sara: What do you think is the next sharing frontier? Will it have to be cooperatives, or will we figure out new ways to think about ownership?

Janelle: Co-ops and nonprofits are going to be the base of the sharing economy because inherently, in their legal structures, they’re not platforms to enable the rich to get richer.

**Sara: So how are we going to set these things up? I think there’s a little too much venture capital-backing in the sharing space. I’m not saying venture capital is all bad—there’s definitely a place for it—but we should be thinking about new forms of capital. What do you think of the SEC rule changes about crowd funding -- the JOBS Act? **

Janelle: I think it’s a huge step forward. I work with so many businesses that have a great vision, but first they need to raise $100,000, and their access to capital is almost nil. They don’t know rich people, and banks won’t lend money to new businesses.

The JOBS Act opens up a huge door for both the business owner and the rest of us. For those of us who are not accredited investors, it’s very hard to put our money anywhere but Wall Street. This change gives us an opportunity to actually invest in our local community.

But we need to continue to reform securities laws, because a small urban farm that just needs to raise $10,000, and wants to receive micro-loans of $100 per person, shouldn’t have so many hurdles to jump through.

**Sara: And do you find that the politics of this fit within the Left/Right, Democrat/Republican paradigm? **

Janelle: A lot of the policies that my organization advocates for get bipartisan support. Initially it surprised us, but then we realized most of it is making room for small business, which a lot of people like.

What we’re trying to argue is that you need to have regulations that fit what is actually going on. We were involved with the federal crowd-funding law, and that bill got bipartisan support. Then in California, we proposed a cottage food law to enable people to sell foods that they make at home, and that got bipartisan support. It’s kind of nice that the left and right are finding common ground in the sharing economy

Sara: So if you had to pick the top five sharing cities or states?

Janelle: It depends again how you define a sharing economy. San Francisco is putting a lot of thought into transportation, enabling ride-sharing, car-sharing and parking-sharing. Seoul, South Korea, has designating itself a sharing city.

There’s also a grassroots level of sharing economy, which is comprised of small neighborhood projects to create things like urban farms, shared housing, and worker coops. In that regard, I’ve been hearing a lot about cities like Cleveland, Chicago, Portland, Oakland, Buffalo, Nashville, and Jackson, Mississippi.

Sara: Yeah. It’s one of the most exciting things I’ve seen in my life. Three years ago, none of us ever talked, we didn’t even know who each other were.

**Now, we’re trying to figure out how freelancers and independent workers can get together to start to form their own co-ops and other businesses, and enable them to do it. **

Janelle: I love it.

Read more about Janelle and the Sustainable Economies Law Center at TheSELC.org.