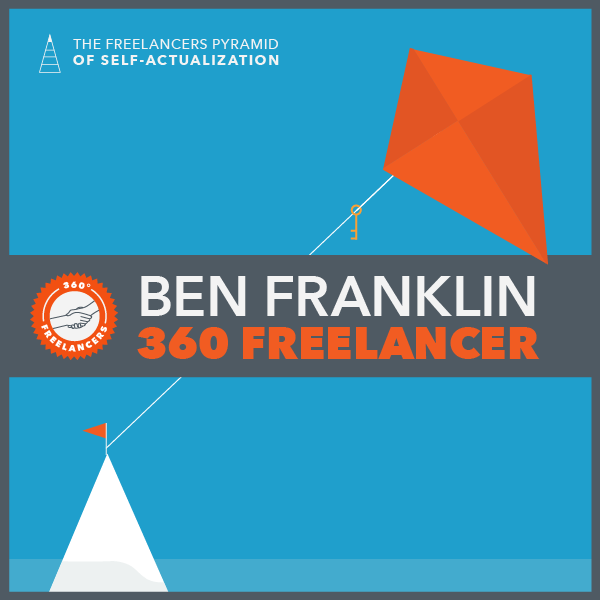 When you imagine the ultimate freelance success, do you see fame and fortune? A big network? Adoring followers? The Presidency of Pennsylvania?

Well, all these things are possible for freelancers who master their craft. (Except maybe the President part.) But it turns out that fame & fortune are fleeting, and the most “advanced” kind of freelancers recognize that giving back and supporting their communities, and mentoring others are the way to build a truly fulfilled freelance life. We here at Freelancers Union call that kind of freelancer a “360 Freelancer,” because they’ve come full circle in their lives.

That’s why we believe Ben Franklin is a 360 Freelancer -- a role model (mostly) for how freelancers should work, live, and create.

Constantly curious. Franklin was constantly pushing the boundaries of what was possible. He invented the lightning rod and bifocal glasses and “discovered” the Gulf Stream, the principle of lightning, and cooling by evaporation. His interests were countless -- he wasn’t just an inventor, or a freelance journalist, or just a statesman, but filled his days with whatever intrigued him. This endless curiosity is the mark of an all-star freelancer: someone who keeps learning, keeps pushing, keeps asking questions.

...Slightly crazy, but in a good way. In 1768, he developed a phonetic alphabet in A Scheme for a new Alphabet and a Reformed Mode of Spelling, which “discarded six letters Franklin regarded as redundant (c, j, q, w, x, and y), and substituted six new letters for sounds he felt lacked letters of their own.” I think those letters are useless too, especially when you have to write the word “why” or “croquette.” Unfortunately, the alphabet didn’t catch on.

Oh, and then there was the time he (probably) went out in a lightning storm with a long metal rod.

He gave back. Franklin’s inventions were altruistic. He wanted his scientific works to be used for improving human life; in his autobiography he wrote, "... as we enjoy great advantages from the inventions of others, we should be glad of an opportunity to serve others by any invention of ours; and this we should do freely and generously."

He understood the power of bringing people together. Franklin was part of dozens of organizations -- including the one that drafted the Declaration of Independence, of course. He founded the first volunteer firefighting company in America, Union Fire Company. (You know we love a good union.) He also founded the American Philosophical Society, understanding that all Americans benefited when scientists came together to discuss new discoveries and theories.

"Yes, we must, indeed, all hang together, or most assuredly we shall all hang separately,” Franklin said. I think Franklin would have appreciated New Mutualism.

Learn more about the 360 Freelancer here and take our quiz here to find out if you’ve reached freelance self-actualization!