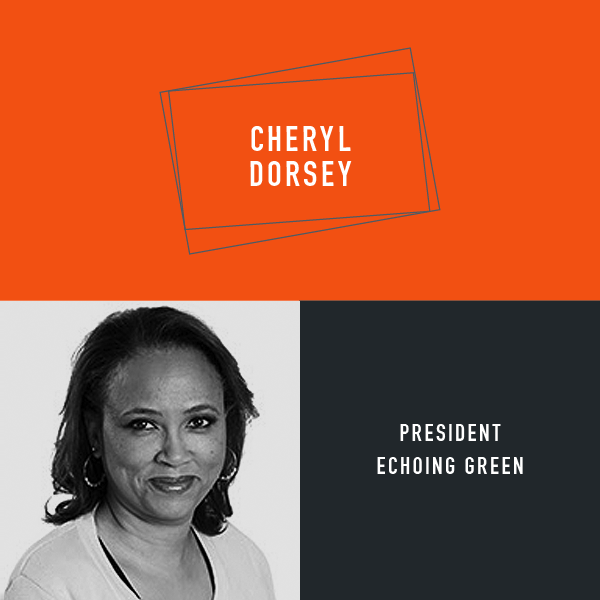 I’ve known Cheryl Dorsey for years. As head of Echoing Green, she’s one of the most important leaders in the social enterprise movement -- and a real inspiration.

I was an Echoing Green fellow in the Class of 1996. What I've found most impressive about that experience is that it really connected me to a network of creative problem-solvers. I've been able to ask other fellows for advice or bounce ideas off them. And to this day, I make time whenever a new Echoing Green fellow needs advice or help.

It's what every successful freelancer knows -- you're only as strong as your network. And Echoing Green has one of the strongest.

I talked with Cheryl recently about what it takes to start an institution that aligns purpose and passion.

Sara Horowitz: Why is social entrepreneurship important now, and do you even like using that term?

Cheryl Dorsey: That’s semantics and terminology—I don’t care what you call it. I’m more interested in the activity and the energy and the momentum around it. At a time when solutions are in short supply, the people who are interested in social entrepreneurship are the ones solving problems with pragmatic approaches, cross-sector collaboration and impact-driven thinking. We need more of that.

Sara: You were one of the first Echoing Green fellows. How did that come about?

Cheryl: I was funded by Echoing Green in 1992, while I was a graduate student. I helped to start a mobile health unit in inner-city Boston, trying to make a dent in the city's black infant mortality rate.

At the time, black babies were dying at three times the rate of white babies, and this was happening in the shadow of some of the world's greatest medical facilities, which just seemed atrocious and ridiculous to me.

So with an amazing obstetric anesthesiologist, Dr. Nancy Oriol, we launched the Family Van in January of 1992. It's still in operation in seven neighborhoods in Boston to this day.

Sara: Wow. That's so great—I didn’t know it was still in business!

I think you and I agree that the for-profit, non-profit distinction is too simple. Social entrepreneurship is about improving the world and society, using whatever tools help you get there, be they for-profit or nonprofit.

Cheryl: You know, I think more and more people are starting to ask, "What is the purpose of capital?" And the answer “short-term profit maximization” is no longer good enough. Clearly, our society—our planet—requires us to think differently if we're to continue to be sustainable in the years to come.

**Sara: It's interesting that so many of us started different projects and organizations in the '90s, just in the interest of trying to get something done, because we all felt that the political system was not helping to create new institutions. And it’s not surprising to me that now, in 2013, a lot of the leaders of our different organizations came out of Echoing Green, and Ashoka, and Prime Movers. These are turning out to be the new anchoring institutions. **

Cheryl: I think you are totally right. But I remain skeptical about some of the older, more hidebound institutions being nimble enough and self-aware enough to recognize that the world has changed around them, and not all of them continue to be needed.

When I look at social entrepreneurs like you who are building these 21st century institutions, you have baked into the cake the kind of feedback loops that keep you self-aware enough to see if you're no longer creating value.

The lifeblood of a sustainable institution is its connection to a movement. The people of a movement breathe life into these institutions and keep them relevant.

Sara: That’s what’s so amazing to me about the union movement – it wasn’t just that it helped wages and income distribution, but that it also helped the Civil Rights Movement and the Womens’ Rights Movement have infrastructure.

For example, there was this cooperative apartment building in Manhattan called Penn South, andThurgood Marshall lived there—his wife (Cecilia Suyat Marshall) was Hawaiian, and they didn’t have that many choices of places to live because a lot of housing was segregated. This cooperative was not segregated, that’s why they moved there. And you have one of the main architects of the March on Washington, Bayard Rustin. And where did he live? Penn South.

Cheryl: It's the network effect, right? It's easiest to see geographically: Silicon Valley is the greatest example in terms of venture capital. You’ve got this place where people with an affinity for risk and technology and investment sort of congregated. And I love this Penn South example.

But it doesn’t have to be a geographic hub. I think of Echoing Green as that kind of virtual network: it attracted a group of like-minded people, who then stood as beacons and examples for the next generation.

So, where’s the next economic model for the 21st Century? What are the new sustainable ways of thinking about something?

Sara: We’re at a moment in time where so many people see the only viable way for them to accomplish anything good is by starting a business.

Social entrepreneurship is a way to say, that's true, it is about entrepreneurialism, being able to imagine and implement something. And I think the challenge for us as humans is, “How do we leave the earth better for the next generation, and the next?”

Cheryl: Couldn't agree with you more. Entrepreneurs have gained this iconic, exalted status because they are an example of aligning passion and purpose. Some new survey recently showed just a dismal number of people find satisfaction at work_<--Cheryl, do you happen to know which study you were talking about? We could link to it if you’d like._ There really is an epidemic of people are just so unfulfilled, so unsatisfied, so unhappy.

And I think one of the reasons people love entrepreneurs is that people see a person who is firing on all cylinders, can’t wait to get to work, doesn’t want to do anything else. It's really about creating something, trying to see it through, being obsessed with it.

You know that if more people found their passion and their purpose and aligned them, the positive externalities for the world would be huge.