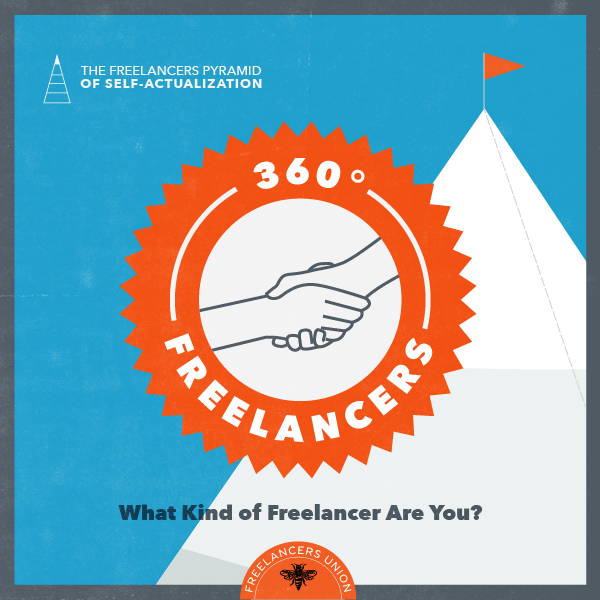 This is what it’s all about. This is the top of the Freelancers Pyramid of Self-Actualization.

When you’re a 360 Freelancer, you’ve finally unlocked what is truly revolutionary about being freelance.

Being at the top of the pyramid isn’t about money. Or status. Or applause.

It’s about giving back. Connecting with your community. Earning enough to get by, but not becoming obsessed with accumulation. It’s about building something bigger and better and more durable -- together.

360 Freelancers have discovered how to balance their time, well-being, and finances -- the 360-degree view of life.

They mentor. They give without asking what they get. They see an opportunity and bring people together to seize it.

But, most important, they’re seeing beyond today. They know that the future will look very different than the present -- and they’re getting ready for it.

Maybe they’re part of a small cooperative of graphic designers who band together to help market each other and keep costs down. Or they make sure they buy from and work with other local freelancers to keep the ecosystem healthy. They buy their groceries at the local food co-op. They attend classes. They teach classes. They go to networking events not just to hand out business cards, but to find other freelancers that share their passions.

360 Freelancers might not know exactly what the world will look like in 20 years, but they’re pretty sure it will be more independent -- and we’ll rely on each other even more to get by.

It’s the 360 Freelancers who are really changing society. They’re deciding what success means. The days of mindless consumption are ending. Freelancers are building a new path, where balance and passion and time are the true markers of success.

What does being a 360 Freelancer mean to you?