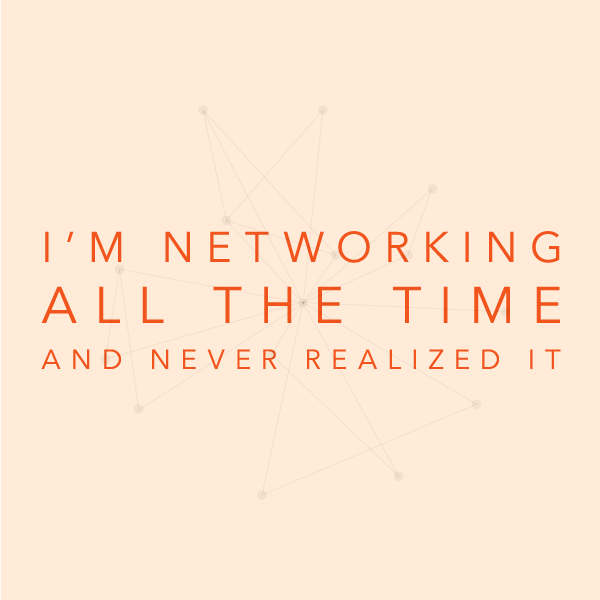 I hate networking—that is, networking as I used to think of it. So I found it rather ironic (and later, fortuitous) that I was asked to lead a workshop on networking for the Freelancers Union in Portland this month.

In preparation for my workshop, I participated in three Freelancers Union events in November and December. One was (gulp) a networking event. I expressed my dread, fear and anxiety about the mixer to my mentor. “I’m afraid of getting trapped with somebody,” I said. “What if no one will talk to me?” I asked. “And how can I politely just ‘bust in’ on a group if there are no other awkward singles like me wandering around?” I queried.

As usual, she had answers for every excuse I offered up. And finally, she said, “Tiffany, this is a great opportunity to gather firsthand experience to share at your workshop.” She was right, and I was out of excuses. She gave me a few techniques to try at the mixer. Instantly I was a little more comfortable, because now I had a job to do—research!

I tried out my new techniques, and they worked quite well. I busted in on a group or two, excused myself from a couple more, and connected fellow “awkward singles” with others so I could move on, guilt-free, to another conversation. Suddenly, I was conversationally mobile, and dare I say, verging on social butterfly status.

Something else I discovered on my research mission is that lots of other people have the same fears about networking that I do. I remember chatting about this with Rebecca Shapiro, the Portland organizer for Freelancers Union, and she gave me a whole new perspective: networking isn’t about making a sale (which is the part that always felt smarmy to me), but about building lasting relationships. Relationships? I can do relationships! With the idea of overt, pushy selling off the table, another wave of relief came over me.

I thought about it more–as I’m apt to do when smacked with an idea that blows my old way of thinking–and expanded my own very narrow definition of networking to something much more palatable. Now, in my world, networking includes every point of contact I have with anyone for any reason (seriously). I’m networking all the time and never realized it! I’m building relationships every day with clients, prospects and peers. And I’m helping people every day—either directly or through other connections I’ve made—and that is truly what I get a charge out of.

So how could I not love networking? I do. I just didn’t know it.

Let’s start building some lasting relationships. Join me in Portland for Thriving Networks: Marketing and Connecting that Works, Thursday, January 23 from 6:30-8:30 pm.

Freelancers Union is also hosting a Freelancers Happy Hour networking event in Portland the night before, on January 22. For more events in NYC and Portland, visit our calendar.