Great Inventors, Entrepreneurs, and Scientists More Likely to be Artists 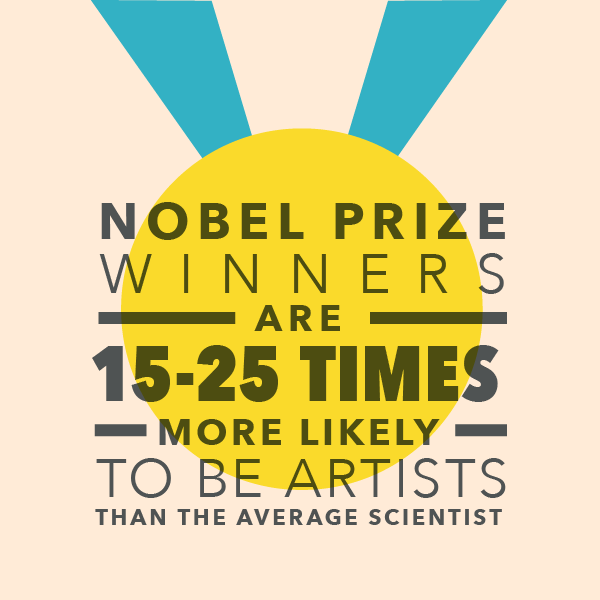 In the late 1940’s, Nobel Prize-winning physicist Luis Alvarez had a decision to make: should he send his son Walter to an academically elite high school or a high school that focused on training mechanics, carpenters, and designers?

Luis sent his son to the latter, and Walter went on to found the theory of dinosaur extinction, get elected to the National Academy of Sciences, and win dozens of other awards. Luis attributed his success to “an uncanny ability to visualize and build almost any kind of experimental apparatus he could imagine” (Alvarez, 1987), skills he no doubt practiced in school.

The skills of artists and scientists overlap (duh?)

Despite 40 years of research on the connection between scientific thinking and artistic thinking, it seems the divide in education (and popular belief) is incredibly persistent. You’re either good at artsy-fartsy stuff OR you’re good at math. You’re either a crafty, hands-on type OR you’re a lab rat. In my university, you were either in the engineering school or you were in liberal arts -- in separate buildings, with separate requirements, curriculums, and teachers.

While science education has gained classroom time and DOE investment, arts education has taken serious cuts in the last decade. Most school systems provide little more than one hour of art instruction a week. It’s a trend that great scientists have railed against for nearly a century. Nobel Prize winners William and Lawrence Bragg “rued the loss of craftsmanship” in 1928, and Santiago Ramon y Cajal, winner of the 1906 Nobel Prize in physiology, wrote: “The investigator should possess something of this happy combination of attributes: an artistic temperament which impels him to search for, and have the admiration of, the number, beauty, and harmony of things” (1951), a philosophy that certainly doesn’t seem to be shared by education “experts.”

A 2013 study out of the University of Michigan by Root-Bernstein et al. has found a profound link between early arts and crafts adoption (including fine arts, building, dance, and theatre) and scientific ability. The study lists 13 skills that make great scientists, including:

Why do scientists need these skills? As an example, one of the best predictors of success in scientific subjects in grades K-16 is visual imaging ability (Winner & Casey, 1992). It’s a skill best enhanced by learning to observe through drawing or constructing three dimensional objects (like sculpture).

Despite this, the researchers found that high school science textbooks only emphasize four of the 13 skills important to scientists, ignoring skills like dimensional thinking and abstracting -- which also go “virtually untrained in science class.”

Impact on the least-advantaged students

Participating in arts and crafts early in childhood (and continuing through adulthood) had a strong correlation to entrepreneurship and innovation in poorer neighborhoods. Researcher James Catterall (2009) demonstrated that arts have the greatest impact on any standardized test score in these areas, even in tests that have nothing to do with arts.

This means that arts and crafts education in poorer neighborhoods “levels the playing field,” Root-Bernstein suggests, “making them much more likely...to return the investment society makes in them by inventing patents and founding new companies.”

Just read these few conclusions gathered in the same report:

I would not be shocked to discover that many of you successful freelance IT professionals, engineers, technical writers and developers also have mastery in art, craftsmanship, or music.

How important is art education to you and/or your children -- even if they don’t become scientists?