Looking for a little solidarity? Here’s a map. 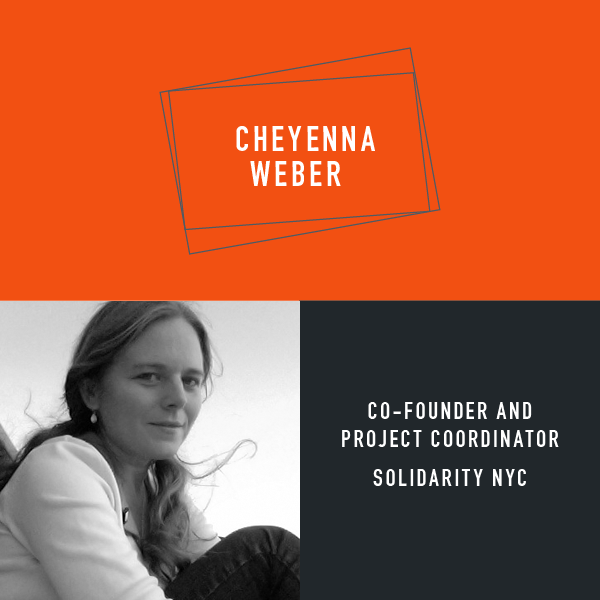 I came across Cheyenna Weber and SolidarityNYC when they started putting together and promoting a “Solidarity Map” of New York City. They’ve been trying to gather any and all green businesses, social enterprises, co-ops, collective-consumption and mutual organizations in the five boroughs into a central, living directory. They’re connecting the dots. Now New Yorkers have a starting point for their own grassroots economic development.

I talked to Cheyenna the other day about how the project started and where it's headed.

Sara Horowitz: I’d love to hear about what you all do and how this grew. Did it come out of the Occupy Wall Street movement?

Cheyenna Weber: SolidarityNYC is a volunteer collective of organizers and academics dedicated to supporting, connecting, and promoting New York City’s solidarity economy. We formed in 2009, after meeting each other at a U.S. Solidarity Economy Network conference in Amherst, Ma.

Our initial projects included a map of solidarity economy groups and enterprises in the five boroughs. We also started attending public meetings or events that they held, as a way to learn more and build relationships. In 2011, we made a series of short films portraying some of these leaders and describing the solidarity economy framework.

It became apparent that these groups hadn’t totally realized their potential to build economic or political power because they had never joined forces before.

In 2012 we released a report of our findings, Growing a Resilient City, and are identifying what the next steps should be.

Sara: So where did Occupy come in?

Cheyenna: We’re an all-volunteer group of organizers, and everybody has jobs in the solidarity economy, so we were able to respond to Occupy Wall Street with more agility than traditional nonprofits. We'd take our map to the park and engage with folks about these ideas. We helped to form both the Alternative Economics and Worker Co-op Working Groups, which ultimately were responsible for a manifesto for a new economy, supporting people from Occupy that wanted to start worker co-ops. Five of those start-ups are still functioning.

Sara: What are they?

Cheyenna: Radix Media is a print shop in Brooklyn that shares space with the OWS Screenprinters. The tech groups include Glocal--a tech and organizers' coop focused on open source software for activist needs--and InterOccupy, which provides connecting technology and support for Occupy groups across the country. There’s also a catering company that was originally the Occupy kitchen, that’s now become a workers’ co-op called I Love Food.

Sara: So we talk a lot about this idea of New Mutualism. How do you define the tenets of the solidarity economy?

Cheyenna: We have five values: Democracy, social justice, ecological sustainability, cooperation, and mutualism. Anything on our map has some element of those things.

Sara: One of the things that we’ve been thinking about at Freelancers Union is that whether you love government or hate government, there’s going to be less of it, so we have to start thinking about new kinds of organizations. I think it has to be some sort of social-purpose, market-based institution—meaning revenues have to exceed expenses. But that doesn’t fit neatly into this political moment.

Cheyenna: I completely agree. The nonprofit model of social change has really limited our radical imagination. It’s made us afraid to move in any sort of business-type direction, even though the Left used to be good at those things. We used to have cooperatives and mutual aid societies and mutual benefit associations.

Sara: Exactly! The whole union movement in the 1920s was doing all of these things, but nowadays the liberal, "progressive" Left seems to have this attitude that money is bad. Money is a community resource -- it’s what you do with it that matters.

Cheyenna: But it’s deeply ingrained. I do a lot of work with young people, and there’s this real intolerance for even talking about money. It’s somehow seen as capitalistic to be concerned about sustaining something. It leads to people making poor financial choices, and then as those folks rise up through the ranks, they make poor financial choices as organizations. Building our economic power as a movement is a tried and true method of attaining economic justice for our communities.

Sara: I grew up in a union family. My grandmother lived in the garment workers Amalgamated Housing on the Lower East Side, til the age of 96, on her garment worker’s pension. She lived in great dignity. It drives me crazy that people don’t see the need for institutions. We have to do a better job of explaining that we’re not just isolated individuals.

Cheyenna: I think you just hit the nail on the head: individualism is at the root of the problem, because everybody seems to think they have to make it on their own. There’s a fear of being part of institutions. I’m 31, and many people of my generation were part of failing institutions as kids. Schools were not in good shape, we've watched health care and other services dwindle.

We’ve lost the ability to set up cooperative organizations at a large scale. It isn’t a lack of will; we’re just unprepared. In the 1970s, the Movement for a New Society trained activists in Quaker consensus decision-making and set up food co-ops to provide jobs for their members, who were radical activists in the anti-nuke movement. This kind of deep education in democracy is mostly absent from U.S. movements today.

Sara: When you look at the more sophisticated cooperative movement in Italy and in Spain in the Basque region, it’s not just free-wheeling. There’s process. There’s leadership. We can’t think about leadership in the old-fashioned sense of a dictator, but in the sense that are different roles to play and there has to be some decision-making.

Cheyenna: On the radical left, and certainly in the Occupy movement, there was a real frustration and tension because there was a sense that hierarchy was evil. It’s not. You can make hierarchy oppressive or you can make it functional and useful and accountable and democratic.

But the regions that you mentioned all have schools that teach this. One of the things that I hope happens in my lifetime is that there’s some kind of cooperative education component that gets instituted in the CUNY system (City University of New York) so that you could get an associate’s degree in cooperative management, for example, or that movement groups are able to step up their democratic leadership training.

Sara: I’m starting to see little things happening all over the place -- organizations like yours, for instance – that I didn’t see a few years ago. It makes me hopeful and excited about all the great work we have yet to do.