The freelance movement has gone global 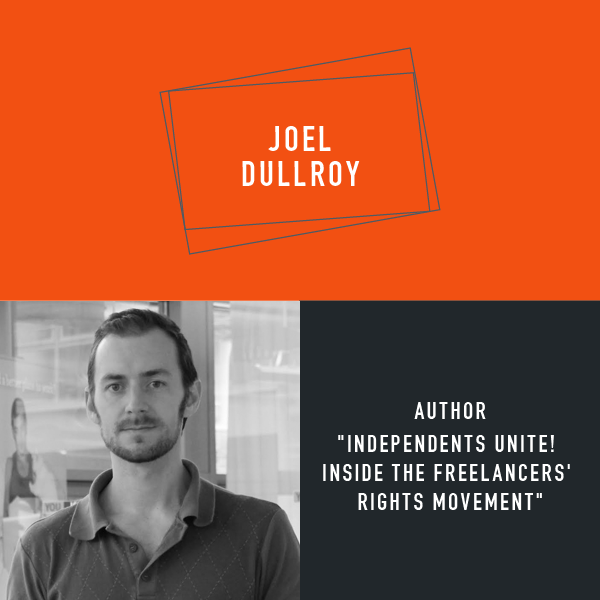 Joel Dullroy is a freelance journalist, activist, and one of the founders of the Freelancers Movement in Germany.

He's also the author of Independents Unite! Inside the Freelancers’ Rights Movement, which looks at the different ways freelancers are banding together across the world.

Joel and I had a great talk the other day about what’s next for the global freelance movement.

Sara Horowitz: You hear this phrase a lot, “The future is here. It’s just not evenly distributed.” Do you feel that, too? What are the major issues for freelancers in Germany, and in Europe?

Joel Dullroy: Freelancers can’t access a lot of the support structures that regular workers can. The whole system’s been built on this binary idea of employer-employee, and freelancers sit outside of that. It’s difficult for us to access services like unemployment insurance; we get charged a far higher rate for healthcare.

So, we could try and vote in a government that would introduce social support systems, or we could start coming up with our own models.

The idea that we can create change collectively is just now starting to spread amongst European freelancers. We’re doing our best to convince them that there is a movement, that they have a collective voice. That’s the first step.

Sara: It’s interesting to hear you say that, because we started talking to different workers groups in Italy and found that freelancers aren’t as much of a known quantity like they are in the U.S. or Britain. In Europe, they’re called “precarious workers,” which implies something different.

Joel: The term “independent professional” gets used a lot, too. The issue of identifying and counting freelancers is something we need to address. We need to do a better job of telling freelancers that they all have something in common and getting them to realize that there’s collective benefit to working together towards political and social solutions.

One of the most destructive things about the political rhetoric of the last 20 years is that it has convinced everyone that we are ultra-individuals, and that it’s part of our identity as freelancers. But that’s a bit false. We are individuals within a context. We need other people around us to support us, and those people who have the best, biggest networks are the ones that get furthest along.

Sara: This is so interesting to hear. We say that all the time – we’re stronger together than we are alone.

Joel: And the European freelance organizations are gearing up at the moment. Our organization in Germany has been going for a year and a half. There’s PCG in the U.K. and PZO in the Netherlands. Some movements are growing in Italy and in France, and we’re just now trying to figure out what’s going on in Spain.

Sara: Coworking spaces are really growing in the U.S., particularly the ones that are venture-backed. Are you seeing that in Europe, or are they still more or less independent?

Joel: They’re still quite independent in Europe, though we’ve seen some bigger ones come in. But something that I was hoping would develop that I haven’t seen is coworking spaces run on a cooperative model.

Sara: It seems like we’re all starting to think about cooperatives and mutuals and new models of. I’m curious, how did your thinking evolve?

Joel: I was running a web platform for coworking spaces, and I remember thinking that it would seem so much more fair if the coworking spaces each owned a little bit of the business, since we wanted them to be transacting through our platform. I remember that I didn’t attempt it at the time because we had investors and a business plan, and it was just too much to start thinking about inventing some entirely new form of ownership.

But what we need to do as freelance organizations and social activists is come up with basic operating rules or conditions that an online platform could use that would be economically sustainable and also financially beneficial to the people who use it.

If there was an easy blueprint available for a cooperative business model online, we would start to see these platforms develop.

Sara: We’re looking at that, too. If you’re doing the work and creating the content, the profits should not go to external people. The value should go back to the makers. But we haven’t seen a lot of that yet.

Sara: It’s also a really different political frame. We’re used to this paradigm of either the free market or big government. What many of us are saying now is that solutions have to market-based, because revenues have to exceed expenses, but you also have to have a business goal of being sustainable for at least two generations into the future. We call it New Mutualism. Are your people talking about this stuff, too?

Joel: People aren’t talking about it yet, I think because we’ve lost the examples. I don’t know anybody in my circle of acquaintances who could give me a description of what a mutual is or how the old friendly societies functioned.

To be honest, I don’t even know, because I’ve never experienced them.

For most people growing up today, you’ve got companies and you’ve got government and you’ve got welfare to support people who are in a bad way. The idea that there was another layer of social protection, one which the individuals form themselves, has been forgotten.

**Sara: That’s so true. In the U.S., we had a whole history of unions providing health care and housing and banks to their members. They really disappeared after the New Deal. **

Joel: We’ve got such revolutions in online banking, social lending and crowd funding. It’s time we started learning from these platforms. These things can be remixed to apply to the idea of a mutual society. It’s not a far stretch.

Sara: It is important for us to start building those mutual supports again, but a lot of “progressives” are still yearning for government to come in. That’s just not the way to go. We need to figure out the market mechanisms that will fill the social gaps.

Joel: Well, on a philosophical level, I believe that social service should be provided by the government, but that isn’t going to happen.

So rather than sit around and wait for government to wake up and realize that we have a huge proportion of our workforce living in a precarious situation, let’s build our own solutions.

It requires leading by example and demonstrating by doing. We’re trying to convince Europeans that they are part of a broader movement of freelancers.

Sara: That sounds like a beautiful place to end.