Can sharing bring us together? Peers.org thinks so. 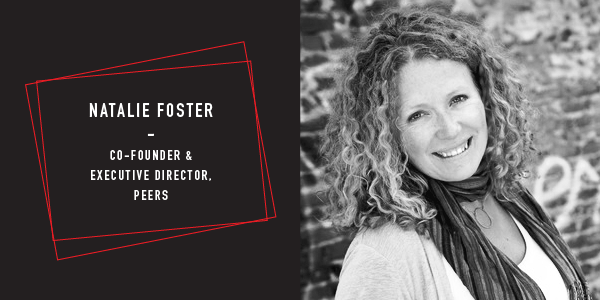 Natalie Foster founded Peers.org, a “member-driven organization that supports the sharing economy "through advocacy and networking."

One of the more interesting things I’ve seen Peers do is host potluck events, called Dinners with Peers, where strangers get together to break bread and talk about how they’re using the sharing economy in their lives. In a recent week, member-hosted dinners took place in 120 different countries.

I had a chance to catch up with Natalie to talk more about how Peers is taking shape.

Sara Horowitz: How did Peers come about?

Natalie Foster: I’ve spent my career creating grassroots-driven social change. For a while now, I’ve been really inspired by people all over the world turning to one another and building a different kind of economy -- everything from baby-sitting cooperatives, time banks and bicycle kitchens to emerging platforms where people are sharing their homes, cars, skills or time. I co-founded Peers to support this peer-to-peer sharing economy movement. We’re only five months old, and have a quarter of a million members around the globe.

Sara: What form does that take? How do you see your role in the sharing economy?

Natalie: We want to help the sharing and peer economy movement see itself. In October, our founding members self-organized 120 Dinners with Peers in 92 cities worldwide, from Tel Aviv to Bangkok to Tulsa, Oklahoma to share dinner, conversation, and plan next steps for their local sharing economy movement. We’ll support our members with more movement-building work in 2014.

And we’re putting tools into the hands of our members to drive the sharing economy forward in their city. An example of people-powered advocacy just happened in Grand Rapids, Michigan, where the City Council was considering a ban on home sharing. Brian and Erica, Peers members, who share their home during an arts festival each year, started a petition at Peers.org to gather support for homesharing. Over 1,000 people signed it and they delivered it to the council and won. That's really what Peers all about -- giving voice to people who want to shape a new economy.

Sara: There's something in the economy that is really changing, and technology is enabling that. Government doesn’t get it—they’re worrying about the wrong things. We are going to have to figure this out ourselves. The big, venture-backed companies like Airbnb have the resources to build this kind of infrastructure, but when you’re a first mover, you get the bulk of the opposition.

Natalie: Yes, we’re seeing that right now in New York. The Attorney General recently subpoenaed Airbnb for information on all their hosts across the state. A Peers member, Mishelle, launched a campaign to fix the illegal hotel law -- and over 230,000 people have joined her call to save homesharing.

While the New York campaign is making news, the sharing economy largely operates without clear public policy to support it (Janelle Orsi of the Sustainable Economies Law Center made a great video explaining this.) We’ll need to work with cities to update the laws and push back on opposition because this is an idea whose time has come: We’re moving from DIY, to DIT -- Do It Together.

Sara: We call it DIO, as in, Do-it-Ourselves. You do better in a group, there’s no two ways about it. That’s why the peer-economy platforms are the infrastructure we need. Now it’s time to start trying things and partnering and making mistakes and learning.

But for some of the social platforms, particularly car-sharing ones like Uber, you can see how cabdrivers feel their livelihood is threatened. We’re seeing the displacement of certain industries, particularly in unionized sectors where workers were working up toward the middle class. What are your thoughts on that?

Natalie: The question of the future of work, as you know very well, is large and complex. People are creating new ways to make money or save money in the sharing and peer economy using their cars, homes, skills, and time. I recently spoke with a Peers member who was a single mom and laid off from her paralegal job. She drives her daughter to school -- and then uses her car on a ridesharing platform to make ends meet before picking her daughter up. And as inequality grows, people like her are turning to the sharing economy.

I don’t think this economic activity is zero sum, I think it’s expanding the market. More people travel because of homesharing. Whether they rent out a room or stay on couches, it encourages a culture of getting out. And as an entire generation moves into cities, we’ll need more mobility options -- bike sharing, car sharing, public transit, taxis, ridesharing -- to get around. As demand grows and markets expand, there’s room for cab drivers and ride-sharing moms.

Sara: One thing I'm always impressed with is how thoughtful you are about this. It's really important that people know that sometimes things are hard and complicated, but that doesn't mean that we all stop doing what we do.

Natalie: Thanks, Sara. There are certainly hard questions to answer, such as, how can the sharing economy create greater economic opportunity in lower income communities? But I also believe in the potential of what we’re building -- the sharing economy is transforming lives. It’s helping the mother who’s back at work thanks to a new babysitting cooperative. It’s supporting the out-of-work factory supervisor who can make ends meet by sharing his home with travelers who need somewhere to stay. It’s energizing the retired mechanic who’s making new friends at his local bicycle kitchen. And this is just the beginning.