4 Life Lessons from the Creator of The Simpsons, Matt Groening 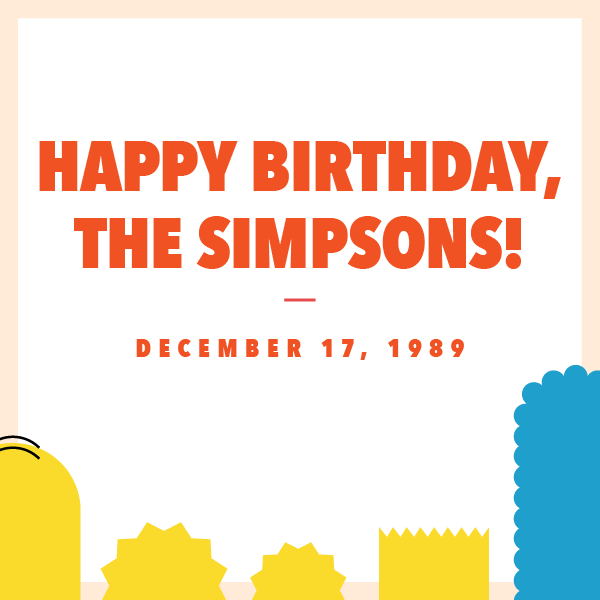 The Simpsons turns 24 today -- it first aired on Fox on December 17, 1989. (A note to uber-fans: shorts featuring the Simpson family aired as part of The Tracy Ullman Show in 1987, if you want to count that as the actual birthday). The show has earned 10 Emmys and is one of the most-beloved animated shows of all time.

In honor of this happy occasion, we’re looking back at The Simpsons’ history and the inspiringly grumpy life of its creator, Matt Groening.

1. Even if you don’t think you’re a genius, other people might.

“Cartooning is for people who can't quite draw and can't quite write. You combine the two half-talents and come up with a career.”

Matt Groening hated school. He didn’t think he was particularly good at anything, and in fact thought of himself as pretty lame right until he became wildly successful.

Then in October 2008 Groening was named the fourth greatest living genius by The Telegraph. Steven Hawking was #7. Listen up, kids.

2. Nothing is impossible. (And if you meet someone doing something you think is impossible, it helps you believe that.)

Even in college, Groening knew that he was going to draw cartoons for the rest of his life. But he didn’t know it was possible to make money doing that.

It wasn’t until he met Lynda Barry, a cartoonist who published in independent newspapers and zines, that he thought he could actually be an alternative cartoonist.

“It felt like I was going to be playing for the rest of my life, I was going to be goofing off," Groening told Mother Jones. "But when I met Lynda Barry, she, by work she was doing, showed me that you could do anything.”

"I love doing "Life in Hell" every week because it's just me. Just me by myself and that's fun -- to sit down with a blank sheet of paper and see if I can write about another one of my anxieties."

Groening has never been shy about sharing his anxieties and peculiarities. “Life in Hell,” the dark comedy strip he began 30 years ago that lead to his success, was basically autobiographical. Salon called the main character, Binky, Groening’s “rabbity, buck-toothed proxy” through which he communicated “a weekly bog of self-pity, anxiety and existential despair.”

While maintaining “a series of lousy jobs,” Groening published “Life in Hell” by photocopying his drawings and distributing them at the local punk store. It wasn’t until 7 years later that a collection of cartoons was made into a book, which was an underground success.

It was seeing a “Life in Hell” cartoon that led a Hollywood producer to contact him for short animated skits in the Tracy Ullman Show, which led to the creation of the Simpsons.

4. Maintaining creative control doesn’t mean you have to squash everyone else’s ideas. Unless those people are executives at Fox.

Though The Simpsons characters were created by Groening, he’s always humble about his part in what the show would eventually become once it aired on Fox in 1989.

“The Simpsons and Futurama are both collaborative efforts," Groening told John Kim in 1999. "I'm the spokesmodel for them."

He credits the writers, artists, and voice actors who work on the series for the show’s success.

But the opinions of the executives at Fox are less important to him. He has a famously “screw you” attitude towards Fox, and Fox has also happily screwed with him when he was trying to launch Futurama. He barrelled ahead with his vision of Futurama, despite the fact that Fox thought it wasn’t enough like The Simpsons.

"If The Simpsons has any single theme, Groening says, it’s that "your moral authorities don't always have your best interests in mind. Teachers, principals, clergymen, politicians -- for the Simpsons, they're all goofballs, and I think that's a great message for kids."