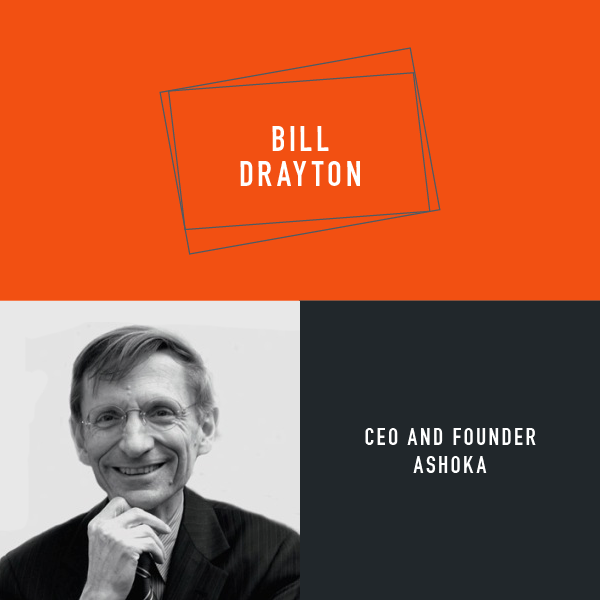 I've been honored to have Bill as a long-time mentor -- and I was thrilled that he sat down to talk with me about his take on the future of the economy, the workforce and the idea of "collaborative entrepreneurship."

His insights are always worth sharing.

**Sara Horowitz: Let’s talk a little bit about social entrepreneurship and how it’s developed. Maybe you can give us a roadmap of where it is now and where it’s going. **

Sara: And how does Ashoka fit into that?

Bill: Ashoka finds the best new ideas in the hands of the best social entrepreneurs, and helps them launch and succeed over their lives.

There are now over 3,000 Ashoka Fellows in over 85 countries. Over half of them have changed national policy within five years of launch.

Over the last decade, we’ve learned that there is one thing that’s more powerful than a big idea at the hands of a really good entrepreneur: It’s a community of entrepreneurs working together. “Collaborative entrepreneurship” is something completely new.

In the old world, the goal was efficiency in repetition. Think assembly lines and law firms. A very few people figured out and made everyone else repeat together efficiently. This worked in a static world. But with the rate of change accelerating exponentially, this structure is collapsing. The half-life of Fortune 500 companies has been getting shorter.

Instead of corporate bureaucracy, you now have fluid, open teams, and “teams of teams.” This new way of organizing completely fits in to the way social entrepreneurs organize.

**Sara: It’s so interesting, because freelancers have to work completely by networks, and that kind of fluidity is how they get their work, figure out what doctor to see, etc. There’s such a parallel between the mindset of being a social entrepreneur and the mindset of being a freelancer. **I wonder if social entrepreneurs were the precursors of a certain way of thinking about change, and now freelancers have to think about it in same way as they put together their own work lives.

Bill: I actually think the Freelancers Union is coming of age in this historical moment, and Freelancers Union totally gets it and is structured to fit the new model. In fact, there’s no place on the planet that is doing a better job or a more advanced job of figuring out how you help a fluid, open “team of teams” work.

The value is in contributing to change, not the mastery of repetition.You realized that you have to organize differently. You realized it’s a new game -- and you built a new team of teams. Existing teams and their people must learn to play different roles and play together differently. As the game becomes change everyone must develop the skills of a changemaker -- empathy, teamwork, a very different kind of leadership, and changemaking.

Sara: It’s another example of how freelancers have to imagine the work and make it happen, because nobody’s handing them an assignment. I think the employee culture of, “Here’s an assignment, go do it,” is getting totally out of date. You can’t think like that anymore, and that’s not being acknowledged yet. Even traditional employees have to think like freelancers.

Bill: Exactly. Value now is in contributing to change, not in the mastery of repetition. You can’t afford to have someone on your team who isn’t a changemaker, who can’t be a player in the new game.

Sara: So now that we’re talking about changemaking and jobs, tell me about Get America Working!

Bill: Its name is its goal, to get more Americans working. The most basic price signal in society is how much it costs to employ people vs. use things like energy, materials, land. We have systematically driven up the cost of employing people and subsidized the cost of using things, so we use too few people and too much of our natural resources.

Get America Working! proposes to reverse that by reversing the price signal. Freelancers know the burden of payroll taxation all too well. It raises hiring costs and kills job creation by raising the cost of labor and effectively subsidizing non-labor inputs, making hiring too expensive and using “things” too cheap.

So let’s wean ourselves off taxing employment, and replace the revenue with equivalent non-labor taxes on energy inefficiency, pollution, waste and consumption.

That would encourage efficient resource use, unleash labor demand, and create tens of millions of jobs -- without raising net taxes or deficits.

Meanwhile, our current policies can’t create those jobs, which hurts people and society. People lose skills and confidence... Once enough people get it, change will happen.

Sara: Like when they’re unemployed or they can’t work or participate in the economy?

Bill: Yes. But when you say “unemployed,” that means official unemployment -- 7.2% or whatever the current number is. That number is misleading. It doesn’t count adults who are no longer working and defined out of the “workforce.” Nearly 40% of the workers it does count work part time or seasonally. Of 246 million non-institutionalized adults, more than 100 million are jobless, though just 11 million of them are counted as “unemployed.” So the real jobless rate is 40%-45% in the US, and in many other countries.

Sara: As you know, I think the unemployment numbers are completely wrong in America, and I think that it’s a well-kept secret. People just don’t want to take a deeper look because we’ve always done it this way. It’s like the inertia factor. It’s craziness.

Bill: There’s a reason why we do it this way. What official unemployment measures is the politically relevant number. When people who vote and participate politically get upset because they can’t find work, that’s a political problem that needs solving. But when tens of millions of people have been told, in effect, “there’s no job for you and that’s just reality and what society expects,” they are less likely to fight it and easier to ignore politically.

But it can’t stay like this much longer. We’re presented with an untenable choice that says if we don’t want to go over the debt cliff, we have to accept perpetual high unemployment. It’s a classic, lose-lose proposition. I think we’re on the edge of breaking out of today’s broken mindset to a very different world and different policies.

Freelancers know we have to change payroll taxation and that we need a new framework for employment and growth, but I think we’re on the verge of many more people seeing it. Europe and Asia are already cutting payroll taxes. Once enough people get it, the change will happen.