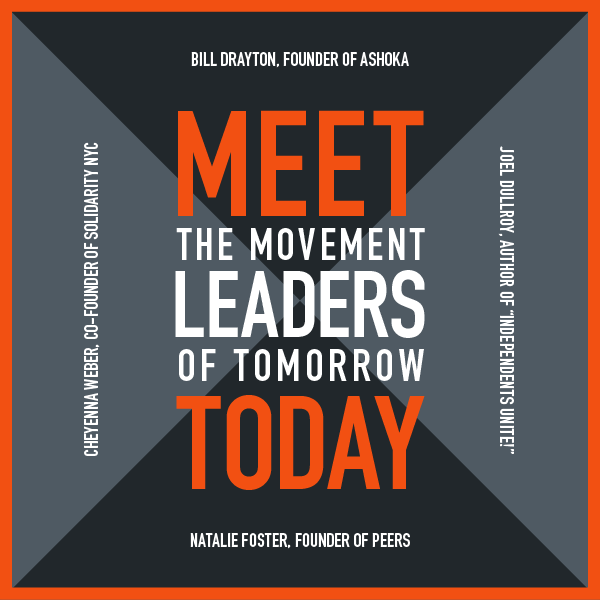 People create big change by working together. And something very big is happening right now.

Over the past few years, it seemed a lot of relatively small, siloed movements were springing up -- the social entrepreneur movement, urban-farm movement, freelance movement, co-operative movement, locavore movement, collaborative consumption movement, and many others.

But really, they’re all part of one single loud, energetic movement. We’re all headed in the same direction, toward a more connected and more sustainable economy. We call it New Mutualism.

We’re all learning from each other as we go along. It’s exciting to see the connections and parallels as our movements converge into one powerful force.

Over the next few weeks, I’ll be posting conversations with some of the leaders within this massive movement:

Bill Drayton of Ashoka: Bill is considered the father of social entrepreneurship--the idea that we can use market forces to generate social change. He founded Ashoka in the 1980s to find and sponsor entrepreneurs whose innovations serve the social good. There are over 3,000 Ashoka Fellows operating in 85 countries. Update: Check out the interview here.

Natalie Foster of Peers.org: Natalie founded Peers, an advocacy group for the sharing economy. It seeks to unite and support the car-sharers, bike-sharers, home-sharers, stuff-sharers and micro-entrepreneurs who are building the foundation for a new, more collaborative, economic system. Update: Read the interview here.

Cheyenna Weber of SolidarityNYC: Cheyenna co-founded this organization to connect and promote green businesses, social enterprises, co-ops and other “solidarity economy” practices. New Yorkers can use the SolidarityNYC map and directory to do their own grassroots economic development. Update: Learn more about the map here.

These are just some of the people leading us into a better, more collaborative future. There are more to come. If you have someone you think we should talk to for this series, please let us know in the comments.