Some of the most interesting travel can be sideways 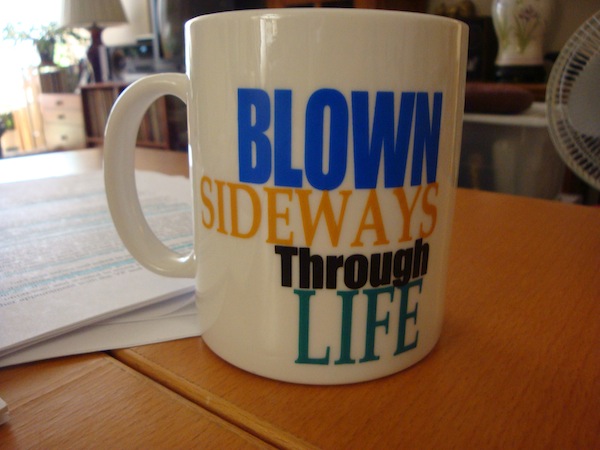 In the freelance life, sometimes you feel like you’re just floating around from gig to gig, without a real sense of direction.

But when you take a moment to stop and look back, you’ve probably learned a lot, experienced a ton, and best of all, can laugh at yourself and your mistakes.

This fall, we asked freelancers to share their favorite mug story with us. This week’s is from Jane Rubinsky, a freelancer writer and editor.

Back when I was first freelancing in the 90s, I did some proofreading at the record label BMG. One of my fellow proofreaders there was Claudia Shear, an actress and writer who also counted pastry chef, whorehouse receptionist, Italian translator, and nude model among the 64 jobs she had held up until then.

Her one-woman show Blown Sideways Through Life, a hilarious "tour de resumé," had just hit it big after moving to the Cherry Lane Theatre from the New York Theatre Workshop, and we proofreaders proudly taped the rave reviews to the wall of our shared cubicle. We, too, might someday find fame and fortune!

When I saw the show, I bought the mug as a reminder of my own slightly less hopscotch career, which was just then leading to a stint as editor of The Juilliard Journal, a full-time position I held for 15 years. Now I'm freelancing again, and the mug is a reminder that things change, all is motion ... and some of the most interesting travel can be sideways.