Why the sharing economy leads to solutions 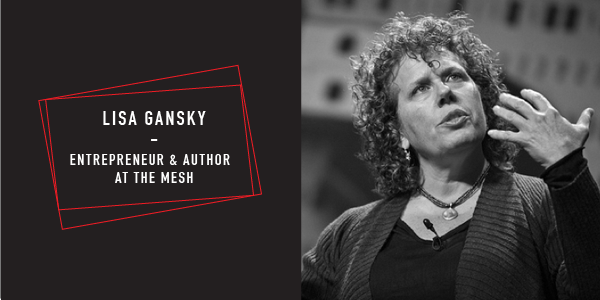 Lisa Gansky saw the sharing economy coming. She’s an entrepreneur and angel investor whose 2010 book, “The Mesh: Why the Future of Business is Sharing,” laid out the business case for collaboration and sharing of resources. She identified this fundamental change from a culture of ownership to a culture of sharing. (Check out her website for more insights.)

Her book was important in articulating some of the principles of New Mutualism, which as readers know is a favorite topic of mine.

I got a chance to talk with Lisa the other day about the future of the sharing economy and how we can use it to solve the bigger problems, like the environment and the changing workforce.

Sara Horowitz: What’s really exciting to you right now? What are the big ideas you’re thinking about?

Lisa Gansky: At heart, I’m an instigator. I like to break business models and provoke discussion around the edges of things. I have been an entrepreneur for most of my life professionally, and then about four or five years ago, I started to look at the world in a very different way. It was partly driven by the pervasiveness of the technology that connects us and the pervasiveness of social challenges that unite us -- or could unite us.

The way that businesses are built needs to be updated. The whole model of venture capital, of public markets, is up for rethinking.I started to work on a bunch of questions that led me to write the book The Mesh: Why the Future of Business is Sharing. Basically, I’m an instigator at birth, entrepreneur, and author. So that’s what I do.

Lisa: We’re at the very, very beginning of what I think of as the sharing economy. I think that the way that businesses are built -- the container, if you will, for organizations and businesses – needs to be updated. The whole model of venture capital, of public markets, is up for rethinking. So is the way in which ideas come to market or products come to market.

**Sara: I talked to Scott Heiferman at MeetUp a couple of weeks ago, and he was saying, “I used to be obsessed with those questions, but now I really just think about providing value and doing good.” **

**You know, people are asking themselves, “What’s my life’s work?” They really want to do something that creates value for people, or they want to be very conscious about how they’re using resources on the earth. ****You’ll see real change when it’s not just a lot of individuals coming to that conclusion, but when it actually becomes a movement. **

Lisa: I certainly feel that there’s a conspicuous acceleration in people’s awareness of themselves and each other. The fact is, we’re more connected as humanity than ever before on the planet. We’re able to see and be aware of what other people are doing. We can theoretically share and learn from each other.

That allows us to say: “Whoa. Whoa. If that person or that community can do that, if they can build a library there, why don’t we do one? That didn’t seem that hard. I found this group on FaceBook and we’re going to Skype later.”

There’s a certain demographic of the world that interacts with things that way, but I do believe that that has accelerated.

City governments are at the center of much of the innovation. Mayors have embraced private-public partnerships, especially with tech.Sara: Where people once looked to government solutions, they’re seeing a government that’s declining. But there’s still a concern about the environment, the quality of life that people lead, the food, their working lives. Love or hate government, we need to figure out how we deal with these real issues.

One note about city governments: they are at the center of much of the innovation and activity. Happily, many mayors have embraced private-public partnerships, especially with technology, beginning with ‘open data’. NYC, Philadelphia, Boston, Portland, San Francisco, Chicago, Seattle, Vancouver, London and Copenhagen have opened data sets and invited developers and service providers to create market-winning applications for services that the government has historically controlled. This is a HUGE shift and is the start of a whole new trend in government, especially winning cities!

Sara: What we’re really seeing is how for many people, this is a way of life. That’s the connection to freelancers. Freelancers really are about putting together their gigs and their lives and so they have to be entrepreneurial, even if they didn’t want to be, you know? It’s almost like maybe they weren’t naturally gifted runners but they just have to run, and the most important thing about almost anything is practice, practice, practice.

Lisa: All of these freelancing things create a really interesting amount of flexibility and social creativity, not only amongst ourselves as individuals but as powerful networks that are self organizing.

Sara: Exactly. I can’t believe how fast this time went, but this has been really great and I look forward to continuing this conversation. Thank you!