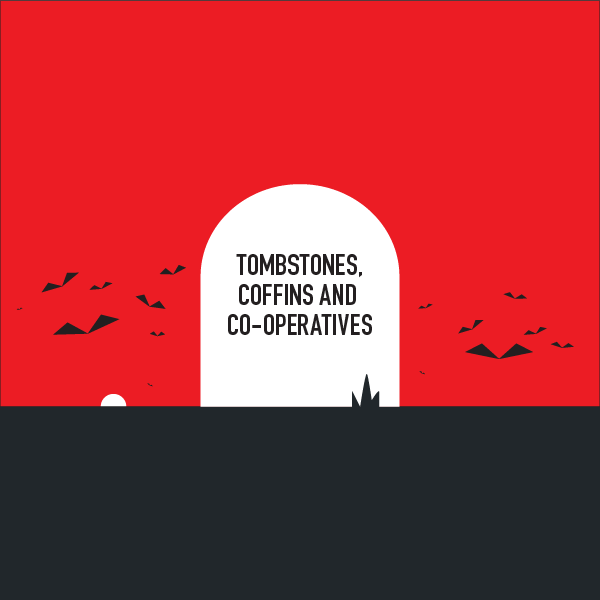 On any other day this might feel a little morbid, but there’s a huge co-op in the UK that I think is worth talking about: The Co-operative Funeralcare.

Yes, mortuaries, funeral homes, undertakers, funeral directors. (It is Halloween, after all.)

Made up of about 900 funeral homes, it's by far the largest co-op of its kind in the UK, and probably one of the biggest in the world. And it’s diversified: Co-operative Funeralcare also owns and operates several cemeteries, crematoriums, a tombstone manufacturer and a coffin factory.

It's Six Feet Under meets Mondragon.

It’s a consumer co-operative, owned by member-customers and they share in the profits. Part of the co-op ethos is concern for the wider community, and Funeralcare sources almost all of its coffins (94%) from sustainably-harvested wood, offers fair-trade bamboo coffins, and went carbon neutral in 2011.

Co-operative Funeralcare is actually part of a larger consumer co-op. Its parent, The Co-operative Group, is a huge conglomerate with more than 100,000 employees and revenues of nearly $21 billion—and can trace its roots back to the 1840s Rochdale Pioneers, the “founding fathers” of the co-operative movement.

What I like about this is that when we use the word “co-op”, we tend to think of food co-ops, agricultural co-ops, or maybe babysitting co-ops or artists’ co-ops. Funeral homes don’t usually make the list.

But apparently, they should! There’s also a huge funeral home co-operative in New Jersey—Thanexus Inc.—whose members run 113 funeral homes, accounting for about one-third of the payroll of the New Jersey funeral industry. Who knew?

Thanexus is owned by these independent funeral directors. It aggregates the resources of its member-owners to centralize HR and back-office support, staff training and benefits. Co-op President Wilson Beebe--who is also chair of the National Cooperative Business Association--talks about living wages and a “living retirement.” (Members contribute a standard 3% minimum to employees’ 401(k), before matching.)

“At the end of the day, despite what people say, it’s not about the box,” Wilson told me. “It’s about walking people through a difficult time,” from a person’s death to the next step--and that has everything to do with the employees, he said.

This shows, again, that co-ops can succeed across all types of industries—they don’t have to be restricted to either niche urban food markets or a rural agricultural networks. Nor are they a uniquely European-egalitarian business structure.

Co-ops work here, too. In fact, their success isn’t even confined to this life.