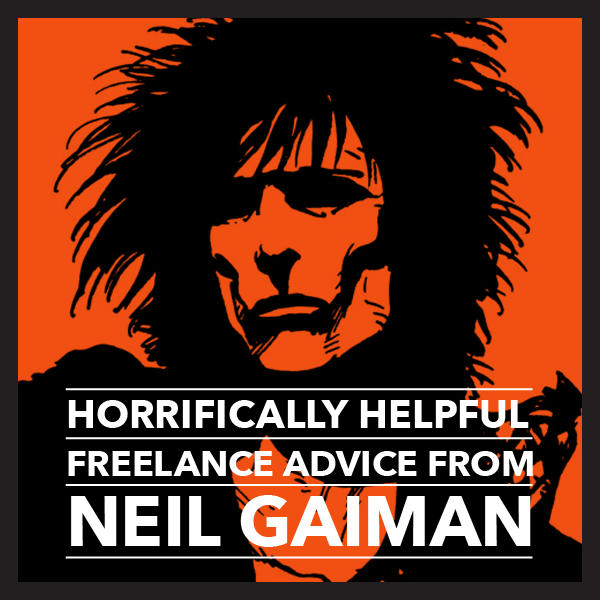 Neil Gaiman, master of horror and fantasy, author of Stardust, The Sandman __graphic novels, Coraline, and mountains of other geniusness, also considers himself a life-long freelancer.

As Gaiman says in his Address to the University of the Arts class of 2012, “more and more of today’s work is freelance.” And he spends the rest of the inspirational (and humorous) speech talking about how he made it as a freelance artist -- though his words apply to anyone who gigs for a living.

I highly encourage you to watch the video. I’ve picked out some the highlights below.

1. It is never "only a dream", John Constantine

Many people don’t think freelancing is realistic. In his speech, Gaiman says that, “The rules in what is possible and impossible were made by people who had not tested the bounds of the possible by going beyond them -- and you can.”

I think freelancers understand this intuitively -- that’s why they started freelancing in the first place, and most of you did so “before it was cool.” There have probably been times when one of these rule-makers asks you, “is it even possible to make money doing that?”

It is, thanks very much.

2. Saying no to proper jobs

“I said no to proper jobs that would have paid proper money,” Gaiman says, “because I knew that for me, they would have been walking away from the mountain.”

At times when your gigs are low or you’re doubting yourself, it’s easy to look towards the cozy comforts of full-time employment with regret.

And trust me, the more experience you get freelancing, the more valuable you’ll be, and job offers will come your way. But just remember Gaiman’s advice: “Nothing I did where the only reason for doing it was the money was ever worth it, except as bitter experience.”

Gaiman gives us a simple formula for a successful freelancer: “The work is good, they’re easy to get along with, and they deliver the work on time. And you don’t even need all three. Two out of three is fine. People will tolerate how unpleasant you are if your work is good and you deliver it on time.”

I talked with a freelancer a few weeks ago who told me that when he started working freelance for X company, that company was this close to never hiring a freelancer again.

Why? No one was ever good at getting back to them in 24 hours. And repeatedly they just floated away halfway through the project.

Don’t give freelancers a bad name! You don’t even need to be especially brilliant if you deliver work on time and are easy to get along with.

If only I remembered this more often, I would save myself a lot of time.

Let’s say you want to get a gig in X field. But that field seems to always require lots of experience in that field. Instead of not approaching a prospective client or answering an ad, get out there explaining all the experience related and around that field that you have. It’s called the 1 + 1 approach, where experience in healthcare plus experience filming interviews could land you a gig where you’re shooting wellness or fitness tips, even when you don’t have experience doing exactly that.

Eventually, someone will listen.

Gaiman once misspelled Caroline as Coraline. Talk about a useful mistake -- that name became the title of one of his most successful novels, which then became a blockbuster movie.

But it’s bigger than that. Who doesn’t have piles of failed pitches? An entire folder called “failed writing/design/art/code/video?” Gaiman reminds us that you can learn just as much from that as from the good stuff. We’ve heard it before, but it’s so hard to remember after you’ve made a mistake that you’re sure will be “the kind of embarrassing failure that people would gather together and discuss until the end of time.”

There’s a point in the Sandman series when a 500-year-old character meets Dream (the main character) and says the following: “I've learned from my mistakes, but I've had more time to commit more mistakes.” Even if you lived forever, you wouldn’t stop making errors.

We’re remembering you today, Neil Gaiman, for being a great writer of freakishly frightening stuff, a great freelancer, and you know, cooler than shades and a leather jacket.