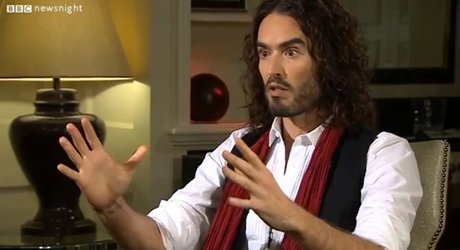 There are a few major milestones in any emerging social change movement:

We’re in the midst of a movement like that right now. People sense the system is fundamentally broken, and they’re looking for solutions outside of the existing structure.

How do I know that there’s a much bigger story yet to be told?

Last week, the British comic (and former husband to Katy Perry) went on a surprisingly thoughtful 10-minute tirade about that broken bargain on a British TV show. The clip has racked up over 8 million views on YouTube alone.

When people with loud, mainstream megaphones begin talking about this broken bargain, you know that something is changing.

“The planet is being destroyed, we are creating an underclass, we’re exploiting poor people all over the world, and the genuine legitimate problems of the people are not being addressed by our political class.”

Now, I don’t think Brand’s proposed solutions are necessarily right or that his argument is particularly strong. But there’s no doubt that he’s right to say the solutions won’t come from the current elite, but instead from us – from people working together to build something new.

We’ve already seen the way people are leaving the corporate framework in order to build their own lives. People are opting out to build a freelance life.

Now it’s time for people to opt out of our current power framework to build new solutions together for the problems we face. Instead of relying on the existing paradigm to solve our problems, it’s time to create a new paradigm of cooperation and innovation.

The fact that Russell Brand is saying this at all – and that 8 million people took 10 minutes of their lives to listen – lets me know our movement is marching forward.