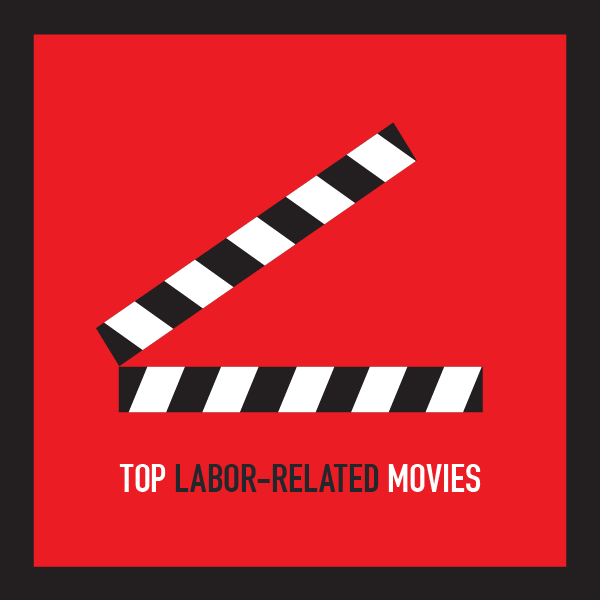 Who doesn’t love movie night? People often ask me about my favorites, so I’ve put together a list of my top labor-related movies. Many of them are based on actual events. Of course they’ve been dramatized, Hollywood-style, but they're still great stories. Documentaries will come next. Enjoy!

On the Waterfront (1954) -- Marlon Brando plays a prize-fighter-turned longshoreman who stands up to union corruption along the waterfronts of Manhattan and Brooklyn. There’s a lot of extortion, violence and racketeering. Won eight Oscars in 1955.

F.I.S.T (1978) -- Sylvester Stallone plays a warehouse worker in Cleveland who gets involved with the union to fight worker mistreatment and unfair labor practices. As he rises through the union ranks, he finds himself teaming up with local mobsters to expand his influence until he’s part of the leadership. Loosely based on Jimmy Hoffa, former president of the Teamsters.

Norma Rae (1979) -- Sally Field plays a textile worker earning minimum wage at a cotton mill in a small town in North Carolina. She decides to help unionize the mill, facing tough opposition from management--and from her family. Based on a true story. Won two Oscars in 1980.

The Mollie Maguires (1970) -- Sean Connery plays the leader of a secret society of Irish coal miners in 1870s Pennsylvania who state their case with dynamite. Fed up with cruel working conditions, the "Mollies" start blowing up mine shafts and equipment. They may also be guilty of kidnapping and murder. A detective, also an Irish immigrant, is sent to inflitrate the group. His loyalties are torn. Loosely based on a true story. Nominated for an Oscar in 1971.

Silkwood (1983) -- Meryl Streep plays Karen Silkwood, a worker at a plutonium plant who gets contaminated by radiation and starts investigating company practices on the sly. She discovers that factory managers are falsifying safety records and more. She contacts a New York Times reporter to leak the story, but dies in a suspicious car accident before meeting him. Also starring Kurt Russel and Cher. Based on a true story. Nominated for five Oscars in 1984.

Matewan (1987) -- Chris Cooper and James Earl Jones. Coal miners in 1920s West Virginia struggle to organize a labor union while the coal company cuts their pay, imports replacement workers and hires private-investigator-thugs to intimidate them. The new miners, a group of African-Americans and a group of Italians, are caught between the two sides and have to choose. Based on a true story. Nominated for an Oscar in 1988.

Germinal (1993) -- In French with subtitles. Gerard Depardieu plays a coal miner in 1860s France where the work is dangerous and wages are so low it’s almost indentured servitude. Meanwhile, the mining company bosses live lavishly. He organizes a miners’ union and the workers go on strike for the first time. Then, there’s a fatal mining accident. Based on a novel by Émile Zola. Won two César awards--Oscar's French equivalent--in 1994.

What are your favorites? If we’ve missed one of your top picks, please add it to the list!

@Sara_Horowitz Made in Dagenham. Have you seen it? If not well worth it.

@Sara_Horowitz @freelancersu newsies!!! It's hard to be sad after hearing "seize the day!"

@Sara_Horowitz No love for Bread and Roses?