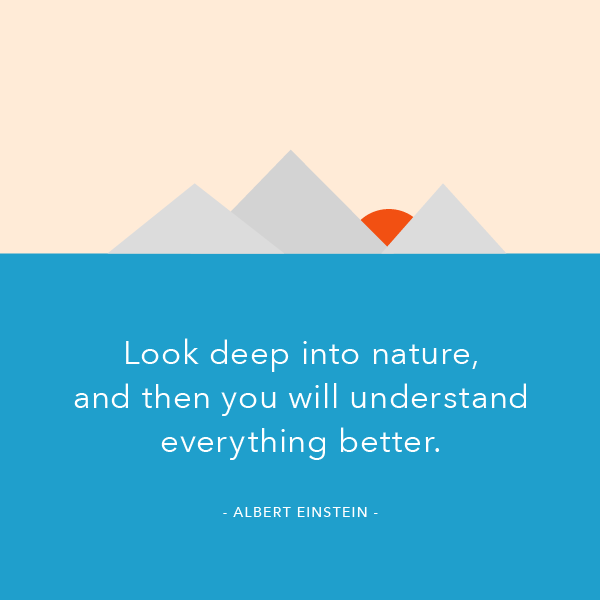 Yesterday, I came to a startling realization: I had not been outdoors in a meaningful way for over a month.

I had walked from my car to my house. I had gone to get food. I had been outside for a hundred brief moments, but it was only to get from one place to the next, and I was always in a rush.

I’m someone who likes the outdoors. But I always forget to make time for them.

Is it important that I do?

1. Looking at nature is sort of like looking at babies

Researchers at the University of Essex in England have found that exercising outdoors is good for your health both physically and mentally. In one study, those who walked outside vs. on a treadmill scored significantly higher on measures of vitality, enthusiasm, pleasure and self-esteem and lower on tension, depression and fatigue, according to The New York Times.

But even sitting in nature, watching birds or animals or just looking at trees, can make you happy. Scientists even have a term for it: biophilia, or the urge to affiliate with other living things. Just like looking at baby faces makes us happy, biophilia is hypothetically a result of human evolution, where “our natural love for life helps sustain life.”

In 2009, researchers took professionally-diagnosed children with ADHD on walks - half of them went through a park, half through a downtown area. The children scored higher on a concentration test after a walk through a park. Richard Louv, founder of the Children & Nature Network, coined the term “nature-deficit disorder” after this study was published to describe the link between nature and focus.

I think it’s fair to say that it applies to adults too - especially if you have trouble concentrating. Adult ADD specialist Dr. Stephanie Sarkis suggests outdoor activities to all her patients, as it lowers “symptoms of distractibility.”

But remember, if you go out in nature to take a break from work, turn off your cell phone. Constantly checking for messages is not going to help you get focused.

Vitamin D is created when your skin soaks in the rays of the sun. High levels of Vitamin D maintain your supply of seratonin, which is thought to be a chief contributor to well-being and happiness. Seratonin is found in lower quantities in the brain during winter.

Turns out that my long-term sunlessness can be serious: “A chronic lack of sun exposure has been linked to fertility problems, several forms of cancer, general poor health and varying degrees of depression,” according to Mayo Clinic.

In the 19th century, a group of progressive reformers began pushing for public parks across the country. This was a reaction against the growth of cities and nostalgia for the countryside, but it was also due to an influx of poor immigrants who were thought to be major sources of crime.

“Art and beauty 'rub off' in contact with young folks in the park and is no doubt carried to the homes,” wrote Edward B. DeGroot, general director of the South Park Commission, in 1909. It was believed that “a more natural environment and planned recreation could mold young immigrants into good Americans.”

Today this idea seems old-fashioned at best (and also classist). But according to research (Fjortoft 2004; Burdette and Whitaker 2005), young people who exercise outdoors do have a “greater respect for themselves and others.”

Personally, outdoor activities remind me that I’m not the only living thing on the planet, which diffuses negative feelings like stress and selfishness - which does lead to a greater respect for others and, of course, for nature itself. If I wake up grouchy or think everyone is terrible, looking at a squirrel nibbling on an acorn or a fawn or a tree in fall colors puts everything in perspective.

Do you find nature makes you happy and helps you relax? What are your favorite outdoor activities?