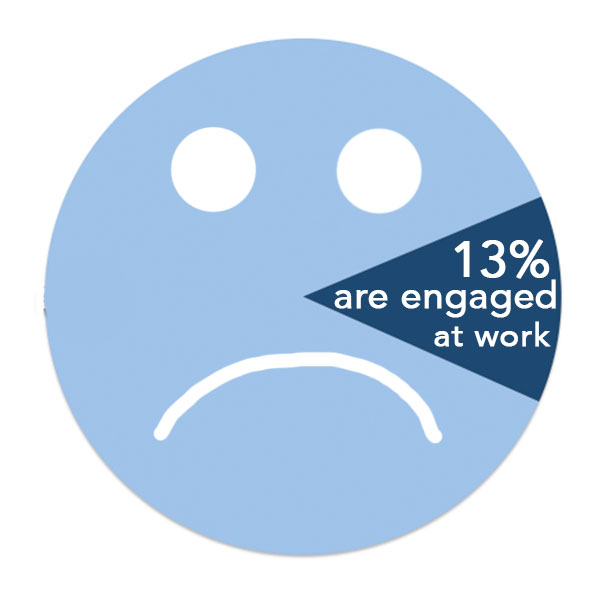 That’s not exactly a cheerful number.

A Gallup report on the state of the workforce released last week revealed that just 13% of workers worldwide are “engaged” at work, meaning they “work with passion and feel a profound connection to their company.” That leaves 87% of working humanity either “checked out” or worse, “undermining what their engaged coworkers accomplish.”

Compare these numbers with job satisfaction among freelancers and independent business owners: 90% of freelancers are happier than before they went solo, and 6 out of 10 say that doing work they love is their top reason for going freelance. While freelancing also has challenges and stressors traditional work doesn’t (like unreliable income), almost 75% of workers currently freelancing plan to continue to do so next year.

Gallup not only measured worker satisfaction, but also the impact that worker’s attitude had on performance outcomes, like customer ratings, productivity, and profitability. As you might expect, engaged employees were 22% more profitable and 21% more productive than disengaged employees. Companies with an engaged workforce were found to have recovered from the recession at a faster rate in 2009.

Freelancers can’t afford to be disengaged; they get new and repeat clients mainly through word-of-mouth, and that simply doesn’t happen if they aren’t committed to doing their best work. Based on the above data, their engagement translates to a great return-on-investment for the companies that hire them.

As Millennials refuse to accept work situations they feel just “OK” about, we expect to see unhappy traditional workers pushing for changes in the workplace - or continuing to flock to freelancing.

Did you start freelancing because you were unhappy at a traditional job?