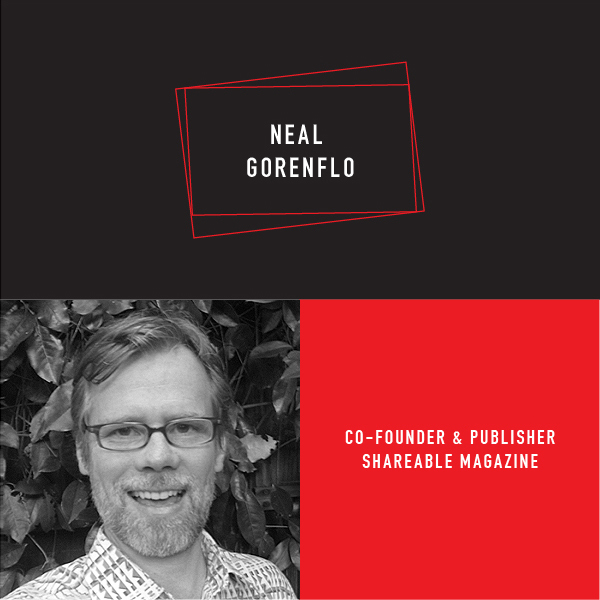 Neal Gorenflo has been on my radar for a while—before I started this blog. He's the founder and editor of Shareable, a nonprofit online magazine dedicated to promoting the culture of sharing.

It's news with a point of view that aims to accelerate the move towards connection, community and a more collaborative way of being.

I was drawn to it because with Dispatches, we're also trying to spark conversation, move things forward and build institutions for a new kind of mutualism.

After several months of mutual fandom—Neal and I have been tweeting and retweeting each other's ideas—we finally had our first conversation. Thought I'd share it with you.

Sara Horowiz: First of all, how did Shareable came about? What was your first sharing experience, or the “A-ha!” moment?

Neal Gorenflo: Oddly enough, my “aha” moment was in a parking lot of an abandoned warehouse in an industrial park outside of Brussels airport. I was on a business trip staying at a nearby hotel, and stopped there on a jog one sunny Saturday afternoon in June 2004. Unexpectedly, I began to cry. I thought, what am I doing with my life? This corporate thing isn’t what I was meant to do.

I thought, what am I doing with my life? Successful on paper, I was lonely, unhappy and unfulfilled.

My life flashed before my eyes. I saw a pattern, that all my suffering was linked to isolation. I had been struggling alone, and it wasn’t working. While successful on paper, I was lonely, unhappy and unfulfilled.

Then the epiphany shifted, and I began to feel an overwhelming empathy for the many others who are in much worse situations than I and suffer alone. I dropped to my knees and started wailing.

This heart-opening moment pushed me to a commitment: I made a vow to do whatever I could to create a life and world where it’s easy to find meaningful work, support, friends, love and community.

I knew sharing was key. I ran back to my hotel room, sent in my letter of resignation, and took the first flight home to get started on a new life based on sharing.

Sara: Wow! And so you dove right in. What was the first thing you did?

Neal: My idea of sharing was pretty crude, but it was a starting place.

So some friends and I created a monthly salon called the Abundance League. We met once a month, usually about 15-20 people, really informal. We started meetings with a gift circle, everyone taking a minute to share their passion, gifts and needs as way of establishing relationships based on purpose, mutual support, and generosity. And then we’d have a speaker. It was designed to invite people to try on a new identity based on sharing and collaboration.

And that really became a beacon in San Francisco that attracted like-minded people. It totally changed my life and how I work. I stopped thinking of my life as a solo performance and began thinking of it as a collective adventure. Abundance League was one of the coolest things I’ve ever done, and it led to Shareable.

**Sara: Was there anything that surprised you when you started doing this? I'm sure it wasn't easy to just change gears like that. **

Neal: I had started out thinking I needed to help start a sharing movement. What I found was that there was huge one that was well underway, that looked like it was about to break into the mainstream—and the job was to connect the various streams of the movement together, both conceptually and socially, and to tell the story of an unstoppable movement.I made a vow to create a world where it’s easy to find meaningful work, support, friends, love and community. Sharing was key.

Sara: There's this whole set of groups and thinkers that are looking at platforms of sharing, and what seems to be the unifier is this idea of people putting their lives together in a different way.

But what I’ve been trying to figure out is, does it matter that some of these companies are venture-backed? Or that the ultimate return goes to a smaller group of people?

You have to recognize that it's really different than cooperatives or entities that are owned by the community or nonprofits. I'd love to hear your thinking.

Neal: I think of sharing innovations on a spectrum that goes from through-and-through democratic, like cooperatives, to, say, a platform like Airbnb where users share, but governance and ownership is concentrated with founders and investors.

I don’t think there should be this division between the "good sharing" and the rest. Let's just recognize what platforms like Airbnb are and what they bring to the table.

Clearly, the Internet and this kind of sharing points to the future, but I think that the sharing that’s catalyzed through the Internet is still a small fraction of what is shared informally through all kinds of large-scale mutual associations, like credit unions and cooperatives, and through local sharing projects, like tool libraries and seedbanks.

That's what I love about Freelancers Union—it's part of this tradition of economic mutuality that is much larger than people realize.

Sara: It’s interesting, because I think that one of the cultural changes in the larger “do-gooder community” is to see ourselves as builders. You're seeing this idea of, how do we get together? How do we share? How do we make something larger than ourselves? As opposed to just trying to tear things down.

Neal: You guys are arguably the vanguard of this change. The indie workers you serve have been let go by the economic elite to fend for themselves, right? Capital is only loyal to itself, not to workers. This nothing new, but there’s a new twist. Your constituents can create just about anything—including their own alternative economy. And your ranks are filled with highly educated professionals. This is arguably a much different situation than the industrial revolution.

In another way, things are the same. The commons that the creative class depend on to thrive—cities and the Internet—are constantly under threat of enclosure by the economic elite. To have the freedom to build, to go down the path of self-determination, this class must fight and build. Fight to keep cities and the Internet open, and build platforms that can deliver freedom and shared prosperity.

Sara: And you can start to see the regions where people are committed to this, and where governments facilitate it—and which don't.

Neal: The cities that recognize this shift will be the vital centers and will experience renaissance.

And I just reflect on the core audience at Shareable, which is largely the creative class, 22 to 40 years old, urban, highly educated, but also low income. These are people who have decided that it's more important to be creative and free than it is to have a secure income in some large bureaucracy.

The best cities to live will be the ones where people approach each other with a simple question: “What can we create together?”And the cities that tap into that energy, build platforms, policies, places for these lovers of life will be unbelievably vibrant places.

The best cities to live will be the ones that embrace the emerging peer culture where people approach each with a simple but revolutionary question, “What can we create together?”

Sara: And what do you think are the economic institutions that could support this?

Neal: I would back up and say, what are the institutions, period—not just economic ones. Culture is a key institution and strategic lever for change. The rising culture that values openness, collaboration, and good works comes out of the original hacker community. This goes back to computer programmers and MIT in the late 1950s. They left their code open, so they could all do better work and do it faster.

The open-source software movement spawned dozens of what some call "open-x" movements: open education, open hardware, the list goes on. This massive change all stems from a decision made by a specific community to do things in a different way. Changemakers and society as a whole can learn a lot from this. We need to hack the culture of our society to get change.

It starts with a decision about who we want to be, as people. Do we want to be small-hearted competitors commodifying every resource until we go extinct? Or do we want to be big-hearted adventurers working together to spread life through the universe?

Sara: One thing I feel like I’ve learned from you is to recognize this as something that has always existed, and we can see the growing rise of these platforms as newer pieces of something broader. It’s part of a larger ecosystem.

Neal: And to add to your point, what I've learned—which has been a profound shift in my world view—is that we tend to think of "the market" as the whole economy, but the market is only the tip of the iceberg. The market would not exist without the commons. All that we share—relationships, language, culture, scientific knowledge, infrastructure, atmosphere, oceans—what would the market be without these? Nothing.

Sara: So true! I think people forget that Silicon Valley is Silicon Valley because the State of California invested in their educational systems, and there was a culture of hanging out and sharing and all those points that you're making.